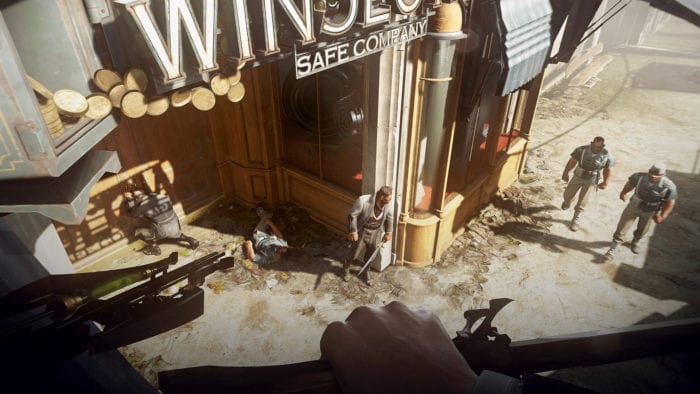 New screenshots have emerged from Arkane’s Dishonored 2 showcasing the new setting in which the game will be based.

Karnaca is the capital of Serkonos, which is referred to as the “Jewel of the South” in Dishonored lore. It is famed for being warm with plenty of lush beaches. So it looks like the environments we’ll be skulking through in Dishonored 2 will be a far cry from the grimy, dank streets of Dunwall.

Funnily enough, both Corvo and Daud from Dishonored hail from Serkonos, so hopefully we will get some interesting backstory about everyones favourite assassins. The city boasts its own special police called the “Grand Guard” who you can see in the screenshots. It’s a basic equivelant of Dunwall’s city watch, yet under the rule of Duke Theodanis, the overseer of Serkonos.

As well as the new enemies we can see the new plague, which seems to be insect-based, a new dimension compared to the rat plague of the west. This opens up a whole host of opportunities for taking out enemies, and I’m sure the team at Arkane have come up with intriguing ways to integrate them into the stealth gameplay. On top of this, we can see a whaling ship, which we already know is the ‘hub’ of the game, and what seems to be an upgraded version of the blink power from the first game. Colour me excited!

The Grand Guard will be replacing Dunwall's City Watch

An upgraded version of the Blink power from Dishonored?

The Whaling boat that will act as the games hub.

Cool steampunk Bird-Bots look to be a tough enemy.