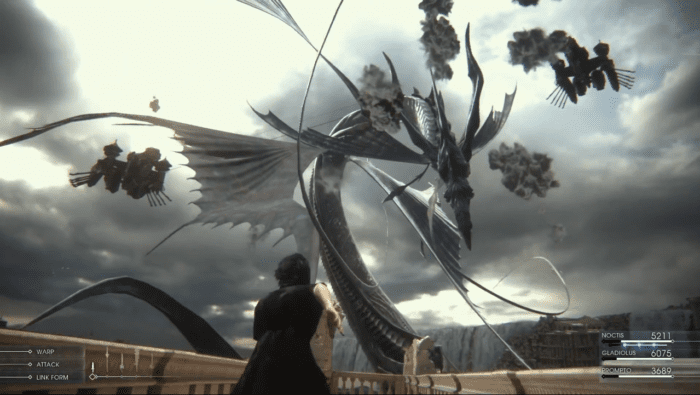 This isn’t too strange of a concept as it has been done in previous Final Fantasy games, but those tall and adorable fluffy birds called, Chocobos will be rentable in the upcoming Final Fantasy XV. You ought to be saving all those Gil!

Yes, as many of you might already know, Final Fantasy has been in development for quite the time.The exact time period is about 9 years in the making. Final Fantasy Versus XIII (the original title of the game) was first shown off at E3 2006. Later down the road, Final Fantasy XV was later renamed and pushed back to release on the next generation consoles. Let’s just say there’s a lot riding on this release date. Talk about high expectations?

Final Fantasy XV takes on a more photo-realistic take on the world. There’s no doubt Square Enix will bringing the best they have using their new engine. With that being said, Final Fantasy XV is based on the real world which we live in. Don’t worry too much, there will still be tons of mythical beasts, unnatural abilities, and magical swords.

While the Chocobo will be typically used for traveling great distances, there will also be mini-games in Final Fantasy XV that include Chocobo racing. Get prepared for tense Chocobo races!

As seen in multiple Final Fantasy XV trailers, you can drive a car in the game. How cool is that? What better way to traverse the world than in a car?

The long-awaited JRPG will not only be releasing for the next generation consoles on Sept. 30, but it will also be PSVR compatible. What better way to try out the PSVR then riding a Chocobo among the vast open lands.

For the first time ever, Final Fantasy XV will introduce combo attacks between the players. This can be very helpful when monsters and enemies become a slight overwhelming, leaving you no choice, but to team up and take down a certain enemy.

Longest Development In the Franchise

Yes, as many of you might already know, Final Fantasy has been in development for quite a long time - around nine years, to be exact. Final Fantasy Versus XIII (the original title of the game) was first shown off at E3 2006. Later down the road, the game was renamed to Final Fantasy XV and reconfigured to release on the next generation consoles (PS4, Xbox One).

Final Fantasy XV will be the first Final Fantasy game to take full use of Square Enix's new Luminous Engine. FFXIV runs on a lighter version, but this will be the full power of the engine displayed in the Agni's Philosophy tech demo of E3 2012.

Final Fantasy XV is more modern than any before it

Final Fantasy XV's world takes a more realistic tone visually thanks to the game's powerful engine, but also thematically. There will still be tons of mythical beasts, unnatural abilities, and magical swords, but also cars, radios, cell phones, arcades, and other modern conveniences.

Seeing the crisp HD graphics of Final Fantasy XV, it comes as little surprise that there will be a photo mode feature within the main game. For the first time in the Final Fantasy series (excluding the capture features of the FFXIV MMO), players can capture every memorable moment and epic boss fight.

FFXV has its own anime series focused on backstory

With all the hype building around Final Fantasy XV, Square Enix has branched out and created an entire spin-off animated series delving into the game's story. Unlike the one-off animated escapade created for FFVII, Brotherhood: Final Fantasy consists of five, 10-minute long episodes that will all air on YouTube for free.

Final Fantasy XV will be the first in the franchise to test the fresh waters of virtual reality. The VR experience will star Prompto and seems to play as more of an arcade shooter than a virtual reality version of the full game.

For the first time ever, Final Fantasy XV will introduce real-time action and combo attacks between the four party characters (again, excluding MMO entries). The series is leaving behind turn-based attacking entirely, a move not everyone is excited about.

Final Fantasy XV will not only be getting its own movie, but it's bringing in the big screen guns like never before. Breaking Bad star, Aaron Paul (Jesse Pinkman) and Game of Throne's Lenna Headey (Cersei Lannister) will both be voice actors on Kingsglaive: Final Fantasy XV.

A more open world than ever before

Many fans will be pleased to hear that there will be absolutely no load screens while driving or flying Noctis' signature car. The franchise loves its open worlds, and now, there's fewer barriers than ever.

Despite already donning its own anime and feature film, Final Fantasy XV is going all out on music, too. As featured in an FFXV trailer, "Stand By Me" by Florence + Machine will be the official theme of the game in both Japan and the West.
Comments
Continue Reading
Related Topics: