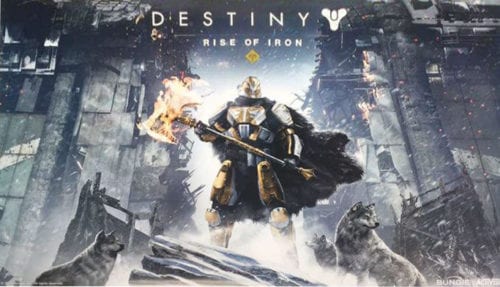 With Bungie’s reveal steam officially over, it’s time to look back and reflect on how gorgeous this new expansion is going to look. Set on Earth beyond the massive wall that has surrounded Old Russia, the new location called The Plaguelands seems to be more focused snowy mountains and exploring the actual wall itself. While almost no actual gameplay footage was shown during the stream, we were treated to some beautiful concept art that helped flesh this world out more.

The art we were given ranges from enemy design, locations, and what some of our new armor may look like on Guardians. It’s clear there are some serious nordic and even Game of Thrones inspired designs around this expansion’s design. Looking through the art alone, we can certainly tell that Bungie is going for a variety of tones and concepts. From the warped designs of the new Fallen enemies to the awe-inspiring crypts of the Iron Lords, this is clearly going for an aesthetic that we’ve never seen before in Destiny. Which is, of course, a welcome change, since the majority of the new content have been just slightly updated areas that we’ve already explored.

It will be interesting to see exactly how much of this art translates into the actual in-game world but given it’s solely for next gen consoles one has to question how far Bungie will be pushing it. There is no doubt that the graphics won’t receive any kind of an overhaul, but by switching to solely Xbox One and PS4 it will be interesting to see how Destiny grows. A new shift to the higher end hardware could offer Destiny much needed room to breath, allowing to expand upon the world further. However, for now, we can simply gawk at how beautiful Rise of Iron is probably going to be.

Lord Saladin and His Wolf Pack

The Fallen and New Plaguelands

What's Behind Door Number One?

Probably Safer On The Dreadnought