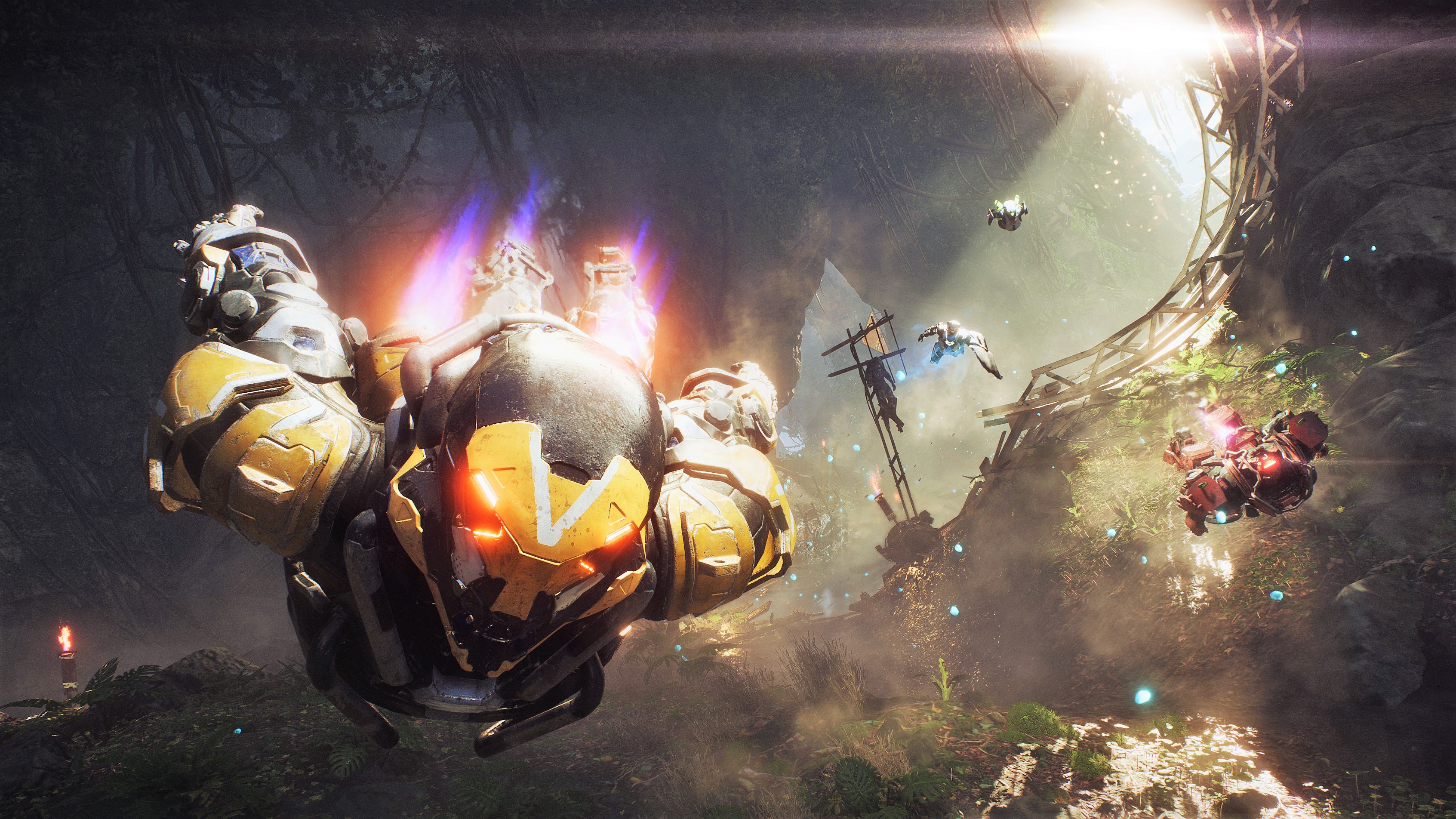 Anthem is a sci-fi shooter RPG developed by EA’s BioWare team, which is also the team behind the Mass Effect series. This is great news because it means BioWare is right at home with this game.

For the uninitiated, Anthem is games-as-a-service game that sees player controlling either a male or female avatar to fly javelins around an Pandora-like (think Avatar) world. There are four javelins to choose from and each come with their own unique playstyle.

When you’re not flying around like Iron Man, you’ll be learning more about the lore and characters of Anthem. In BioWare fashion, Anthem’s voice cast is packed with great voice actors that are sure to anchor this experience down as one of this generation’s best narrative experiences.

Within the voice cast, you’ve got voice actors like Ray Chase and Kate Kennedy using their superb talent (that’s long been in the video game industry) to bring life to this world. They’re surrounded by a number of other great voice actors, too.

Kennedy is especially exciting because she’s served as not only the voice of many EA roles, but many EA BioWare ones too. While she hasn’t voiced many named roles in the EA BioWare wheelhouse, she has voiced a number of background roles.

Anthem is available for some on Feb. 15 and others on Feb. 22. That’s because the game has a number of early access options via EA subscription services.

If you can’t sign up for those services (looking at you PS4), you can play either the standard edition or the Legion of Dawn edition of Anthem when it releases to everybody on Feb. 22.

Sarah Elmaleh voices the female player in Anthem and accordingly, she doesn’t have a name in the game. That’s coincidentally fitting because she’s been in many video game roles that are also unnamed characters. She was the Hero Savior Female Sidekick in Uncharted 4, additional voices in Final Fantasy SV and the CDP Lightning Pilot in Black Ops III.

Beyond those roles, she hasn’t done too much, which makes her role as the female player in Anthem easily one of her largest.

Be sure to search for Twinfinite for more information on Anthem.

Sarah Elmaleh voices the female player in Anthem and accordingly, she doesn't have a name in the game. That's coincidentally fitting because she's been in many video game roles that are also unnamed characters. She was the Hero Savior Female Sidekick in Uncharted 4, additional voices in Final Fantasy XV and the CDP Lightning Pilot in Black Ops III. Beyond those roles, she hasn't done too much which makes her role as the female player in Anthem easily one of her largest.

No doubt the biggest name in the voice cast of Anthem, Ray Chase has served in a number of pivotal roles. He was Noctis in Final Fantasy XV, the Master in Kingdom Hearts and arguably the best One Punch Man character, Puri Puri Prisoner. He's also Marlon in the final season of Telltale's The Walking Dead. While those are some of his recent roles, you've heard him in Octopath Traveler, World of Warcraft, God of War, Nier: Automata, Horizon: Zero Dawn, Battlefield and so much more. Similar to Nolan North, there's a good chance Ray Chase has been in many of your favorite games.

Vik Sahay has already won the hearts of many as Anthem's Matthias, but before that, he spent a lot of time in smaller roles throughout movies and tv. He did however serve as Lester Patel in Chuck and Prateek Duraiswamy in American Reunion, both roles he nailed.

Rochelle Neil voices Faye in Anthem and as such, will serve as a source of knowledge and help throughout your javelin journey. Before voicing Faye, though, she isn't somebody you've likely seen too much of. Most noticeably, she was Jessica in Showtime's Episodes and Shelly Kennedy in 2015's Death in Paradise. Despite her smaller-role background, she does have a bright future ahead of her with a role in the next Terminator movie, Terminator: Dark Fate.

Nick Tarabay has an extensive background in sci-fi which makes him a great fit for Bioware's upcoming sci-fi shooter, Anthem, where he'll voice Haluk. Before Anthem, he was a Klingon in Star Trek: Into Darkness, Sonny in Pacific Rim: Uprising and Digger Harkness in CW's Arrow. He's also played Ashur in Spartacus and Matush in The Sopranos.

Kate Kennedy might not be a name you recognize, but you've heard her in quite a few video games. She voiced Hela in Lego Marvel Super Heroes 2, the elves, dwarves and the Flaming Pig in Divinity: Original Sin II and she voiced Avela Kjar in Mass Effect: Andromeda. Her voice can be heard in Battlefield V and World of Warcraft: Battle of Azeroth, too, although in those games, she's simply listed as voice acting talent.

Sarah Amini is, while not new to the scene of acting, new to being at the forefront of a property. She most recently found herself one of the main roles in Hulu's Future Man as Thimble. Beyond that, the only thing she was in that you might recognize was Scandal. In Scandal, though, she was simply an unnamed staffer for two episodes of 2014.

The reason you don't see a picture of her Anthem character, but instead see a question mark is because we don't yet know who Amice is. She's been mentioned before but never seen in promotional material or gameplay. When we learn who Amice is in the world of Anthem, we'll be sure to update the post.
Comments
Continue Reading
Related Topics:Anthem, bioware, EA, Guides, voice actors, voice cast