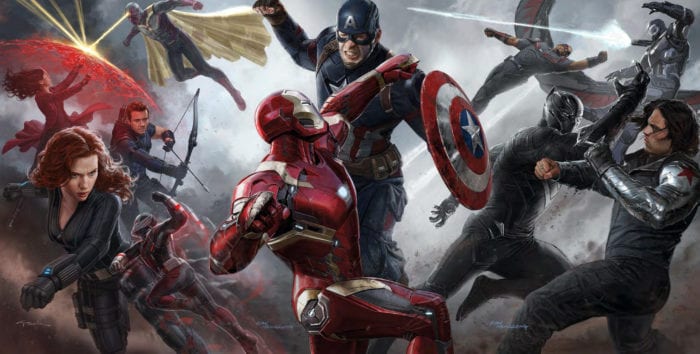 The third season of the Marvel Cinematic Universe’s first shot into television builds upon the excellent foundation of season two with more action, more intrigue, and more fun. With a creepy ensemble of villains and strong performances, the spy series shows how far its come in the days since season one. While Captain America cleans up the spy game on the big screen, Peggy Carter does her own espionage work on TV. Taking her to LA in 1947 allows the show to get in some good jabs at Tinseltown, along with more world building for both the title character and larger MCU.

The Marvel comics have had cosmic threat after cosmic threat pile up over the years, and that means you need a team to handle them. Enter The Ultimates, comprised of the smartest minds and most cosmic heroes to deal with problems head on in ways that go beyond punching. With trippy visuals and an engaging story, it makes for one of the best comics put out by the publisher. If you find yourself wanting more Black Panther goodness after his appearance in Captain America: Civil War, you won’t be disappointed here. The King of Wakanda hasn’t been doing right by his people as of late, prompting an uprising on two fronts that requires him to think about how he handles the royal throne, and maybe call in some backup when needed.

The Inhumans are getting a focus from Marvel right now, and Uncanny is a good place to start. With Black Bolt back from his self-imposed exile, that includes rescuing his Medusa's time displaced son, along with some detective work in his nightclub. (Yes, really, and it's actually really cool.)
Buy it!

His name is Matt Murdock, and he is not afraid. The new solo comic for the Man Without Fear sees our hero in the District Attorney's office in Hell's Kitchen in the day, and at night, he's teaching the newcomer known as Blindspot how to be a hero. But of course, that Murdock bad luck comes into play when the Tenfingers crew and old enemies come into play.
Buy it!

Suppose you've always wanted to play through the MCU films with your kids or significant other. Thankfully, TT Fusion has got your back there, delivering all the fun of the films through the bricks that we've come to know and love over the years.
Buy it!

The world of Stephen Strange is a strange one indeed. Someone's killing magicians across the dimensions, his powers are on the fritz, and the stuff in his fridge is full of horrors in and of themselves. Even with all of that, his solo comic is a fun romp through the mystic arts, and you should definitely check it out.
Buy it!

Captain America: Civil War - The Art of the Movie

If you can't get enough of the biggest movie of the year, the art book will satiate your needs. With stills from the film with additional commentary from the cast and crew, the book is a definite must own if you wanted to know how the movie was made.
Buy it!

Hey, remember that awesome chase scene in Captain America: Civil War between Winter Soldier, Black Panther, and Cap? Well, now you can recreate that greatness in LEGO form! And also, Panther has a jet, just to add to the crazy.
Buy it!

Black Panther was one of the breakout characters in Captain America: Civil War, and now you can own a tiny version of him to put on your dresser. Funko figures are getting to Pokemon levels of addiction, and with his movie coming up, it's best to get this now.
Buy it!

The Marvel universe's breakout character is now an Avenger, but she'll always be a Jersey girl at heart. Kamala soon learns that being boosted to A+ status is more stressful than she thought, but she's still got the chops to take on anything that comes her way.
Buy it!

Sunspot has taken over Advanced Idea Mechanics and turned it into the Avengers Idea Mechanics. With A.I.M. under new management, that means new members like Wiccan and Songbird, along with new threats like bad guys from other universes and giant dinosaurs with the American Flag painted on them. Because comics.

The Marvel comics have had cosmic threat after cosmic threat pile up over the years, and that means you need a team to handle them. Enter The Ultimates, comprised of the smartest minds and most cosmic heroes to deal with problems head on in ways that go beyond punching. With trippy visuals and an engaging story, it makes for one of the best comics put out by the publisher.

If you find yourself wanting more Black Panther goodness after his appearance in Captain America: Civil War, you won't be disappointed here. The King of Wakanda hasn't been doing right by his people as of late, prompting an uprising on two fronts that requires him to think about how he handles the royal throne, and maybe call in some backup when needed.
Buy it!

Logan as Wolverine is dead, and that requires someone to take on the mantle at being the Best There Is. Enter Laura Kinney (X-23), and first on her to do list is to rescue a trio of clones who look and have abilities suspiciously like hers. No one ever said that being Wolverine was an easy gig, but she's more than up for it in one of Marvel's most surprisingly heartwarming comics.
Buy it!

Look, just trust us on this: you need to read The Vision. It's perfectly written, beautifully drawn, and just straight up unnerving as all hell. It may be the closest thing Marvel has out to a thriller comic as of yet, and if you ever wanted to see what the publisher's top android would be like with a family of his own creation, then yeah, this'll scratch your itch. Just also be prepared to get wigged out.
Buy it!

The Heroes for Hire are back in an entertaining buddy cop (uh, buddy hero?) ongoing. Luke's the muscle, Danny's the puppy, and even though not both of them want to be back in the game, they can't resist getting into trouble. Don't call it a comeback, more like...actually, yeah, a comeback, and a welcome one at that.
Buy it!

Think you know your stuff in the MCU? Get some pals together and some drinks, and go through this themed foray into Trivial Pursuit that covers the films of the whole enterprise up to Age of Ultron.
Buy it!

The Star Spangled Man has had one helluva year, and the merch for him reflects that perfectly. With this shield, you can feel like Captain America himself. Just don't try throwing it, because it may not come back.
Buy it!

Square Enix gave the Sentinel of Liberty the treatment they've given plenty of other characters, and it's awesome. At 12 inches tall, he retains the look of the MCU, along with his shield's design. Go ahead and make him pose, you know you want to.

C'mon, don't deny it. You know you want to get back into coloring books again, and with Marvel's characters, there's no better time to do so. Grab some markers and a book or two, sit down with your legs criss-crossed, and get to work.
Buy it!

Luke Cage is an awesome show, and the music is a great point of that. Handled by A Tribe Called Quest's Ali Shaheed Muhammad, the 51-track songlist covers all 13 episodes and makes you feel like you're in Luke's version of Harlem yourself. Just, y'know, hopefully without getting one of Luke's epic face smacks.
Buy it!

The closer to the Captain America trilogy makes for one of the best MCU films to date. Strong performances anchor the whole shebang, topped off by excellently done fight scenes and the surprising revelation that is the great chemistry of Winter Soldier and the Falcon. Plus, Spider-Man's there, and he's great.
Buy it!
Comments
Continue Reading
Related Topics:all new wolverine, black panther, Daredevil, feature, inhumans, marvel, mcu, ms marvel, new avengers, the ultimates