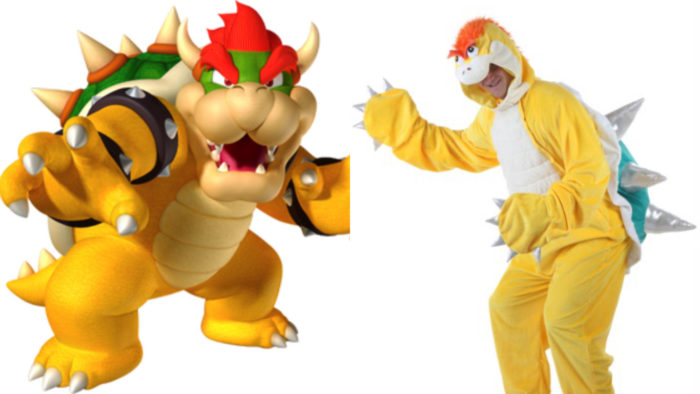 Halloween is a time for all of us to dress up as our favorite characters and have fun trick or treating, or going to a party. Well, not every costume is made equal and there’s a number of hilarious unlicensed gaming costumes out there. Video game characters are all the rage, so of course there would be a ton of costumes out there.

First up is the Mario series, and the characters from Mario seem to be some of  the most hotly wanted costumes. Of course there’s Mario himself, who can come in the variations of video game guy, video game hero, red plumber, italian plumber, and of course much much more. Then you have Bowser and Yoshi, who can both be represented by yellow dragon and green dragon respectively. Of course, Mario’s biggest competition is right behind him.

Sonic the Hedgehog has quite a few various costumes as well. There’s one thing about Sonic that costumes just can’t ever seem to get right however, his eyes. That’s just Sonic though, and you can find costumes for all of his pals like Tails and Knuckles as well.

Then we can switch to a few more modern games like the terrifying Freddy Fazbear, and of course all the Master Chiefs and Spartans of the world. That’s not even mentioning the myriad of different Assassin’s that you can find at any costume or party store. There’s so many that you really could have a different Assassin outfit for every occasion.

As long as games exist and have instantly recognizable characters, there’ll be no end to the amount of outfits you can find for Halloween or any other occasion.

It certainly doesn't take a master sleuth to realize just who this "World Traveler"  costume is.

Daisy may not be the most recognizable princess of the Mario series, but pretty much anyone can tell who this "Sunflower Princess"  is pretending to be.

This is more likely to be some random Assassin  foot soldier, but hey we can't all be the great Ezio Auditore.

We aren't quite sure what Pokemon Trainer  this costume is supposed to be. Is it the trainer from X and Y, or some version of Ash Ketchum? Either way, at least people will know you're out there to catch Pokemon.

Bowser is a huge imposing video game villain, but really he doesn't hold a candle to this Yellow Dinosaur with Green Shell

If you want to distinguish yourself from Master Chief and the Halo series, maybe just don't name your costume Spartan. Or anything even close to it.

LEGO figures have a pretty unique look to them overall, but this Mr. Blockhead costume looks nothing like them. Not even one bit.

Link - The Legend of Zelda Series

Link is one of the most iconic video game characters of all time, but at the end of the day he's really just an Adult Elf Warrior.

Yoshi is Mario's trusted friend and ally throughout the series. We have a sneaking suspicion that this "Adult Green Dragon Costume" is copying the iconic character.

Have you ever wanted a Pikachu costume that makes you look like some kind of backup dancer at a Super Bowl halftime show? Oh...... you did? Well I guess you're in luck with this "Shocking Beauty" costume then.

It's really quite amazing how many Treasure Huntress characters we have in video games. Just look at these two for example.

Ah the generic Ninja that's themed in the exact same colors as Scorpion.  It's a Halloween staple.

Yeah there are some minor differences between the Dragonborn and this "Viking Warrior" mask. But when you find it in the video game section, there's really only one thing you can conclude.

The Joker's right hand helper is a dangerous villainess with unique flair. She may not be quite as unique as we originally thought though, as she looks almost exactly like this "Hot Court Jester."

That's right, the epitome of all video game costumes. Do something special and be the Video Game Guy this Halloween.
Comments
Continue Reading
Related Topics:Costumes, Halloween, hilarious, unlicensed, Video Games

Why I Rent Video Games From Libraries and Why You Should Too
By Aaron GreenbaumJanuary 14, 2020