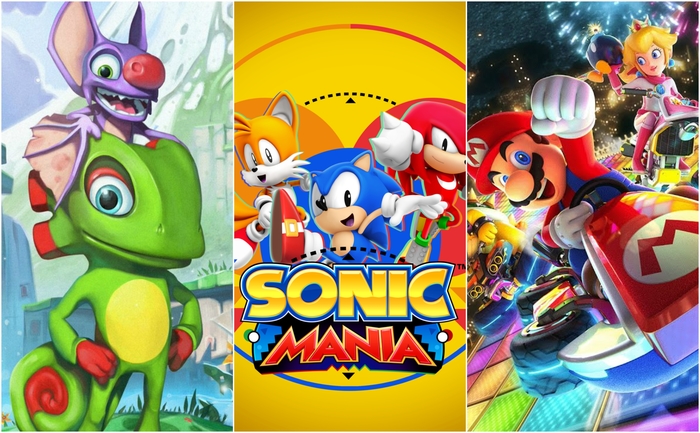 Everyone seems to still be enjoying the heck out of the Nintendo Switch with games like The Legend of Zelda: Breath of the Wild, Binding of Isaac, Bomberman, and a few others, but there are many other titles coming out for Nintendo’s new console that people might not know about. There are Switch exclusives, ports, and indie remasters headed to the Switch in 2017 and beyond that you guys should know about.

One big game that I’m excited to play on my Nintendo Switch is the upcoming Yooka-Laylee, the old-school 3D platformer that’s reminiscent of games like Super Mario 64 and Banjo-Kazooie. It comes out in a few days for the other main consoles, but the Switch release has been pushed back to sometime later this year. The game is developed by some of the same people who worked on Banjo-Kazooie for the Nintendo 64.

With the Zelda train soon to be dying down, here are 15 Nintendo Switch titles that will make players turn their system on to play something other than Breath of the Wild. There are much more than fifteen games coming to the system but I decided to pick 15 that I’m kinda excited to play myself, I just have to beat Zelda first.

Playtonic Games spiritual successor is coming to the Switch sometime in 2017, a little after the other consoles, but it'll be worth it to take this colorful, 3D platformer on the go with you.

Returning to the classic style of the past Genesis Sonic titles, Mania turns those retro stages on their head and introduces new gameplay mechanics. Tails and Knuckles joins Sonic on this nostalgia-filled adventure. It's planned to release this year before the end of September.

If you thought Mario Kart 8 on the Nintendo Wii U was awesome, then this Deluxe edition on the Switch will blow your mind. Not only does Deluxe include all of the previously released DLC, but there is a brand-new battle mode that was slightly lacking in the Wii U version.

While being a sequel to Xenoblade Chronicles, the game will not star Shulk but a brand new character who is searching for Elysium. This open-world JRPG is still set to release in 2017 for the Nintendo Switch, but we haven't gotten any big updates since the reveal in early January.

Nintendo's competive paint shooter made quite a splash when it released on the Wii U a few years ago. The Switch is getting proper sequel this summer that is sure to appease all fans of Nintendo's new property.

The game that was created by one man and one man only will be making its way to the Switch this June. This Metroid inspired title takes you back to the golden-age of 2D platformers. Cave Story+ features updated graphics, a boss rush mode, and much much more.

Monster Boy and the Cursed Kingdom is a spiritual successor to SEGA's Wonder Boy series, mainly Wonder Boy III: The Dragon's Trap. The game is an open-world side-scrolling adventure in which a boy named Jin must battle enemies and solve puzzles in order to progress through the story.

When you take LEGO and Minecraft and mix them up together, you end up with LEGO Worlds. With an open-world full of LEGO bricks for you to command, Worlds will provide fans hours of imagination-fueled fun.

Earlier this year at the live Switch presentation, Suda51 of Grasshopper confirmed that the main character of the No More Heroes series will be making a comeback on the Switch. We have no title or date yet, but just know that everyone's favorite wise-cracking Assassin will be back and better than ever.

Fans of the Zelda series will be happy to know that Oceanhorn will be making its way to the Switch sometime this year. The game has been criticized for being obviously similar to the Legend of Zelda: The Wind Waker and A Link to the Past. Oceanhorn has you sailing a boat across the seas, completing dungeons, collecting items, and even cutting some bushes to find coins and hearts. Though similar, It makes for a great game to play on the Switch.

Shakedown Hawaii is Vblanks latest game that has you building your corporate empire all while destroying the competition with everything that you can. Shoot, drive, and beat your enemy's senseless on the beautiful island of Hawaii.

Towerfall is Super Smash Bros. with bow and arrows essentially. An archery combat arena game that is loads of fun for any sit-down multiplayer action. Everyone has a limited supply of arrows and must shoot other players whilst dodging and picking up missed arrows in the process. The Switch shall be getting some Towerfall love once it launches in 2017.

Thumper is a VR compatible rhythm horror game... crazy right. Well it obviously won't be a VR game on the Switch but that's alright. Thumper is still a terrific, trippy, intense, rhythm action game that is just meant to be played by any music fans. The developers have set the Switch release date for sometime this spring.

A fresh take on haunted house horror, Perception has you playing as a blind woman named Cassie, who used her extraordinary hearing and sharp wits to unravel the mysteries that haunt her. This creepy experience will be heading to the Switch in 2017.

Tequila Works has had their hands full with making sure that their upcoming puzzle-adventure title released for all consoles, including the Switch. The game involves a boy who needs to escape an island and a curse. The developers have announced that the Switch version will be coming after its counterparts and will cost a bit more due to higher development costs.
Comments
Continue Reading
Related Topics:2017, nintendo switch, sleep on, switch exclusives, switch games, Titles