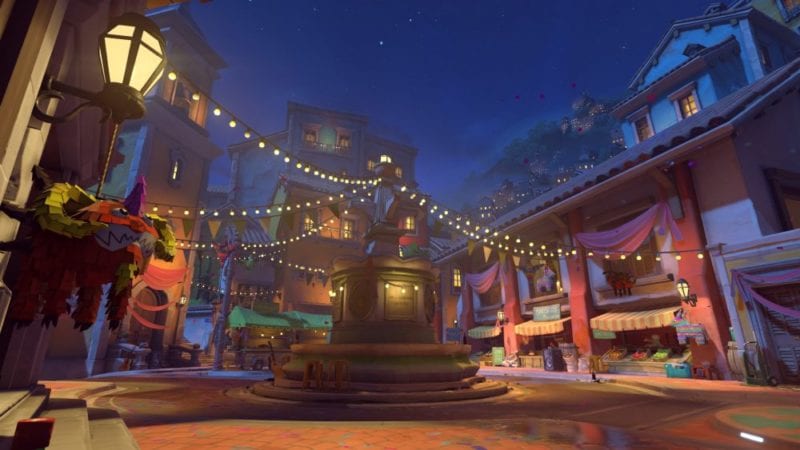 Multiplayer games can live and die by their maps, as a bad layout can ruin an entire player’s experience. They have to be able to accommodate for all types of classes and playstyles, without forcing players into a certain class or weapon. Overwatch is a prime example of this design philosophy, as the twelve different multiplayer maps are not only visually stunning, but cleverly constructed. They exude personality, allowing for them to be easily identifiable to both viewers and the players. What makes Overwatch’s map choices interesting is they are based on real world locations, yet are exaggerated in a colorful, fun way.

So looking to the future, what could a new set of maps entail for Blizzard’s class based shooter? When deciding what places Overwatch should have us do battle in next, we decided to take in a variety of factors. The levels must be accommodating to all four class types and should have at least three stages to them. We will also only be choosing one game mode per level, as Overwatch’s stages do not overlap at all in terms of having a choice of modes for them. If it’s a payload map, then it will only ever be just a payload map. Finally, there has to be a certain charm to each location, as the playfulness of Overwatch needs to always be present. Hopefully, these 15 maps will be in our future very soon!

The "City of Sin" would make an excellent backdrop for the chaotic battles in Overwatch. Couple this with the various themed casinos and it would certainly provide a memorable experience. Plus, the payload could be an armored car that you have to escort down Las Vegas Boulevard.

Having to travel up a skyscraper while delivering a payload via an elevator, surely makes for something we haven't seen before. There aren't a ton of vertical based maps, so this would certainly be unique.

Another location that is sorely underused, the beauty and almost dream-like nature of this national park is legendary. With beautiful rock formations and a healthy mixture of different terrains, it'd make an interesting battle ground for Overwatch.

Truthfully, it's a bit surprising that a location in NYC wasn't in Overwatch to begin with. Grand Central is one of the most famous terminals in the world and having to fight for such an iconic location could offer a suite of interesting scenerios. Just make sure you don't fall onto the tracks in the process.

Arguably one of the world's most gorgeous locations, fighting in the Amazon would be absolutely stunning. It would also offer some unique terrain challenges, given how dense the jungle can be.

As visually breathtaking as some aquariums can be, it's rather surprising that none have been used for multiplayer maps. Fighting in various water tunnels and knocking people into shark tanks would be awesome. Plus the level itself could also include the behind the scenes areas and the various gift shops.

The famed Paris museum would certainly be a unique type of location in Overwatch. Many of the exhibits are all in different areas that branch off of a central lobby, which could make for an interesting capture point map. Just make sure not to damage all the precious art in the process.

A payload specific map, having to fight through abandoned traffic from one end of the bridge to the other is a recipe for mayhem. Not to mention we can play as Winston and recreate Rise of the Planet of the Apes.

Honestly, it's really amazing that this wasn't an original map for Overwatch. Given how important it is to the world itself, and especially Winston, this could offer interesting moments for not only characters but gameplay as well. Putting characters in zero gravity would certainly change up many playstyles and offer up more of a challenge to speedy heroes like Tracer.

Even heroes need a break every once in a while, so what better way to relax from slaughtering each other than a nice cruise? Offering multiple different floors and the ability to knock people into the ocean? Sign us up.

Come on, Roadhog and Junkrat need some love too. Why not visit the country that this dangerous duo hail from? Alice Springs offers an interesting duality as it possesses both an urban area and beautiful land formations. This gives players the ability to go from fighting in the streets to battling it out on various mountains.

Battling among ancient ruins on a perilous grouping of mountains sounds like a good fit for Overwatch. Given how the ruins constantly escalate up the side of the mountain, this can offer a variety of engagement ranges and cover spots for both defenders and attackers.

Okay, this is obviously not set in the Overwatch world, but including a level from Blizzard's hit RTS Starcraft would be too good to be true. Char is the homeworld of the Zerg and its molten exterior wouldn't be like anything we've fought on before. Just make sure the Hydralisks are well fed.

Venice is arguably one of the most beautiful cities on the planet and it would be an incredible place to do battle in Overwatch. Forcing the attackers to guide the payload down the various canals, would certainly be different. Although, I don't think Genji's armor is waterproof...

Lucio is certainly a fan favorite, so why not pay a visit to Brazil? Rio de Janeiro is certainly iconic and has a variety of areas that could serve as a nice three-stage capture map. It would obviously have to start on the beach, move into the city, and end at the Christ the Redeemer statue.
Comments
Continue Reading
Related Topics: