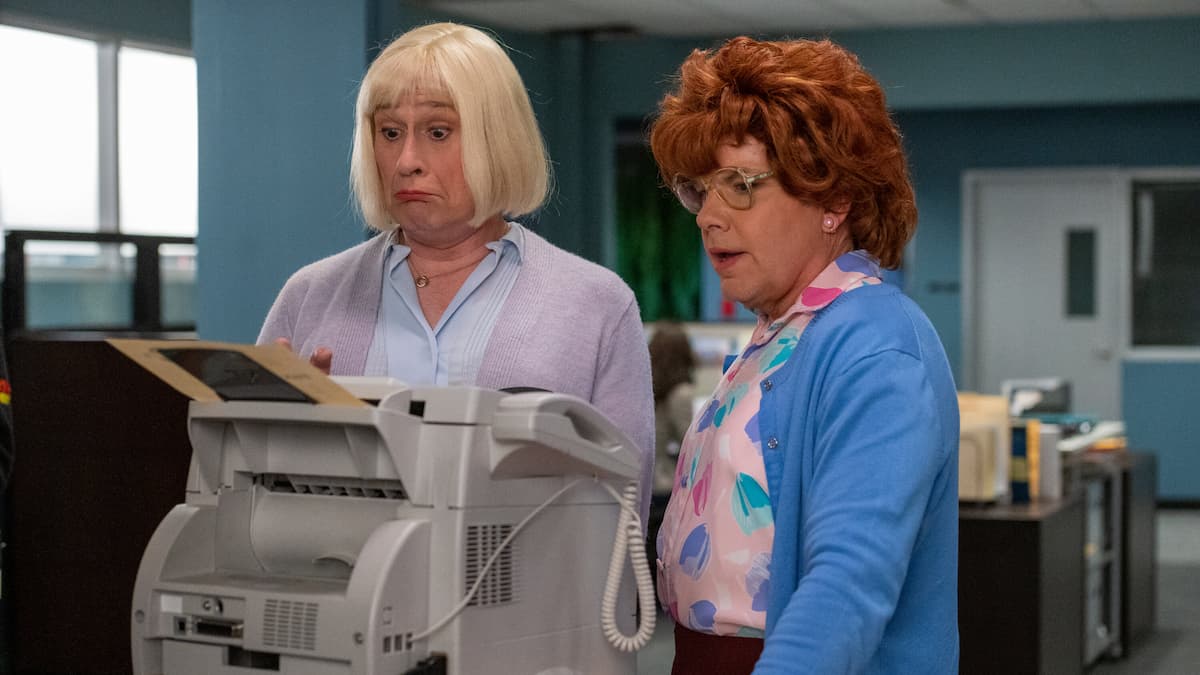 There was certainly no shortage of TV show content to enjoy in 2022. We’ve seen a huge number of different series excel over the past 12 months; some thrive in a furious climax, and even older ones enjoy a lease of life in unforgettable moments.

There has been much change on the small screen, given all of the recent developments in the television industry, such as the merger between Warner Bros. and Discovery. It’s resulted in the gradual reduction of HBO Max, Netflix’s similarly game-changing subscriber loss, and the failure of several smaller streamers to thrive. Yet the change has allowed a few shows to really shine bright and flourish, in a year that could have been seen as overloaded by mediocrity due to sheer volume. So which shows really came out on top? Let’s do one of our signature rankings, shall we?

Though not every risk taken in Russian Doll’s thrillingly bold second season pays off, the show’s willingness to take chances is frequently its own payoff. Compared to the last season, this one has a lot more gore, squick, and existential weight. The first season resolution was very satisfying, but the results of the subsequent seven episodes seemed more like a spiral into despair than an increase in happiness.

The show is a great example of how science fiction can be utilized to produce storylines that delve into the essence of what it is to be human, rather than merely being a collection of artificial technical words and explosions. Russian Doll’s latest season is a prickly and perplexing delight that requires viewers to unpeel layers of history, pop culture, and intriguing people to get to the show’s fundamental dilemma, which cannot be answered.

Yellowstone rides into the political arena with a very nonpartisan slant, traversing uncharted territory while remaining comfortably seated, thanks in large part to Kevin Costner’s unwavering presence. It’s time to saddle up for another season of drama, deception, and John Dutton doing what he believes to be right for his ranch, despite what his adversaries might think.

Yellowstone, one of the most popular shows on television, is back for a spectacular fifth season, packed with more of the same theatrics and dazzling stunts that made it so popular in the first place. As seen by the debut episode, Yellowstone’s fifth season maintains the show’s reputation for spectacular visuals. The Western culture that lured viewers in is well represented, from thrilling action sequences involving horses and suspenseful human brawls, which will have fans demanding another five seasons.

Severance is one we’d consider a ‘complete picture’ since it is both daring and secretive, and it provides new insight into the dangers of working in corporate monotony. An investigation of free choice and corporate savagery gradually increases in tension. The show is exquisitely minimalist yet dramatic at the same time. As it progresses, it takes on the speed of a thriller and may get unsettling enough to be nightmare-inducing, yet it still manages to keep a smattering of its naughty humor throughout.

This chess game of a show, directed partly by Ben Stiller, is the most thought-provoking show of the year because it serves as both a reflection on the contemporary struggle to find a healthy work-life balance and an emotionally compelling examination of the destructive force of bereavement.

Instead of turning this into a simple trick where we get to watch all that is lost in the transitions of existence, the program instead invites us to join the same weird and unsettling reality that the characters are experiencing. It is a masterful glimpse of a life lived and tortured, both professionally and personally, merging the two into a perfect visual joy.

As Better Call Saul ends its run, the show has maintained the same high level of craftsmanship that it showed in the first season. In the last season, the storylines that have been developing over the course of many seasons finally reach a crescendo.

One of the most aesthetically stunning, meticulously crafted, and emotionally engaging series in the annals of television’s long and illustrious history. The fact that the program was able to successfully combine several genres is brought to light in this, its last season. It’s part legal/relationship drama following Jimmy/Saul and wife Kim’s jobs and lives together, and part crime thriller following Jimmy’s unfortunate interaction with questionable regulars like Gus and Mike.

Together, these two storylines make up the fabric of the show. These threads are dramatically brought together in the midseason finale, which culminates with a shocking act of violence like no other. So brilliant is Better Call Saul and its thrilling final season that we think it beats out Breaking Bad in our recent comparison.

The sixth season of Peaky Blinders deals with the tragic death of actress Helen McCrory in a tasteful and mature manner while laying the groundwork for an appropriate conclusion to this epic narrative of charismatic gangsters. Even if it feels like the right time to finish the program, Peaky Blinders has that heavy, clumsy stamp of quality, which is a particular combination of early 20th-century gangsterism juxtaposed with modern music and comfortingly accented speech.

Even if Peaky Blinders has reached the point where it looks like the right time to end the program, it still has that weighty, almost clunkiness of quality to it. Sure, the show has a lot of problems, but that doesn’t mean it’s boring owing to the increasingly grandiose, often fairly explosive setpieces that are scattered throughout the program. These elements ensure that the show is never boring.

The Kids in the Hall have matured into seasoned comedy pros without breaking stride, offering a new batch of skits that will make long-standing fans incredibly satisfied. Their immaturity as young men was already rather funny, but when seen as the wrinkles and droops that come with late middle age, it is much funnier and a little more frightening to think about it. In keeping with the format of sketch comedy, each episode has both good and bad moments, but when they do hit, the humor is spot-on outrageous, and vulgar.

This comedy resurrection is successful at least in part due to the fact that it seems stuck in the 1990s, in contrast to other comedy revivals that fail to live up to their predecessors because humor is so reliant on the cultural context in which it is presented. They are obviously not children anymore, and they are not just repeating the activities they performed when they were in their twenties. Even if they are older and have more life experience, it does not always indicate that their humor is more mature. Which is a wonderful thing for the sake of holding on to those big laughs well into the twenty-first century.

Unlike any other television show, What We Do in the Shadows has always been a safe haven for viewers at the darkest of times. Given the automaticity with which popular culture casts women in nurturing roles, this may be seen as progressive and encouraging. The fourth season of the FX vampire comedy has even more out-of-the-ordinary plot twists and characters. Among them is a nightclub frequented by vampires and a metamorphosis into a terrifying child.

FX’s groundbreaking series is still the most wildly enjoyable half-hour comedy on television because its heroes keep looking for meaning and satisfaction in all the wrong places. Even if it has not yet reached the heights of earlier seasons of Shadows, the show is still very enjoyable because of its phenomenal cast, clever storylines, and a great deal of profanity that is, quite simply, wonderful.

Bad Sisters is hilariously original in addition to being witty, smart, and harsh. A blend of family drama, a clumsy detective story, and dark humor, the Apple + streaming program is sharp and biting. It also delves into the all-too-current issues of controlling behavior and emotional abuse in partnerships.

The show is an Irish remake of the Belgian sitcom The Out-Laws from 2012 that follows the five Garvey sisters. The eldest, Eva (Sharon Horgan), took on a mother role after the tragic death of her parents in a vehicle accident while the sisters were young. Audiences feel an instant connection to these developed people, sometimes just because of how devoted they are to one another. Bad Sisters is a fascinating conundrum, but its main draw is the desire it installs in viewers to join the Garvey sisters in their own sacrifices.

The Bear has received a lot of accolades, and for good reason, for the uncanny accurate picture of restaurant life that it offers. The labor that takes place in a kitchen has only seldom been shown on TV in such a believable manner. This is a show about a restaurant, but it’s also about the effort to keep a small pilot light of hope burning brightly in one’s heart.

The majority of episodes take place almost exclusively inside the diner’s confined kitchen and luminescent dining area; yet, via flashbacks and asides, we learn about the individuals that congregate there and their lives outside of the diner. The tension that arises from the fact that two opposing qualities—refinement and grit—can often be found coexisting in commercial kitchens is the primary source of the story’s dramatic tension.

The narrative is elevated to the level of something really remarkable by flawless performances, boundlessly gorgeous directing, and a sparse, allusive screenplay, all of which are just as brilliant in the story’s more numerous loud moments as they are in its more intimate quiet ones. Christopher Storer, the program’s creator, and Joanna Calo, the show’s co-showrunner, have laboriously crafted a show that has been painstakingly prepared and ultimately plated up to perfection. Sit back and savor the delectable morsels of each episode.

Barry has seen a significant pivot in the direction of the show’s more sinister tendencies in the third season, as well as a departure from the show’s reliance on Barry to serve as its emotional focal point. This change has helped make Barry a more enjoyable program. It is far more intriguing than it would have been if it had kept to the premise of an emotional hitman peppered with comic tropes.

The show pulls into fine detail the lives of its supporting characters in Season 3, as well as the sorrow that these individuals face as a result of their ties with Barry. It is a dramatic about-face for a season that has placed less emphasis on highlighting its protagonist and more concentration on investigating, with painstaking care, the impact that his cruelty has on people who are close to him.