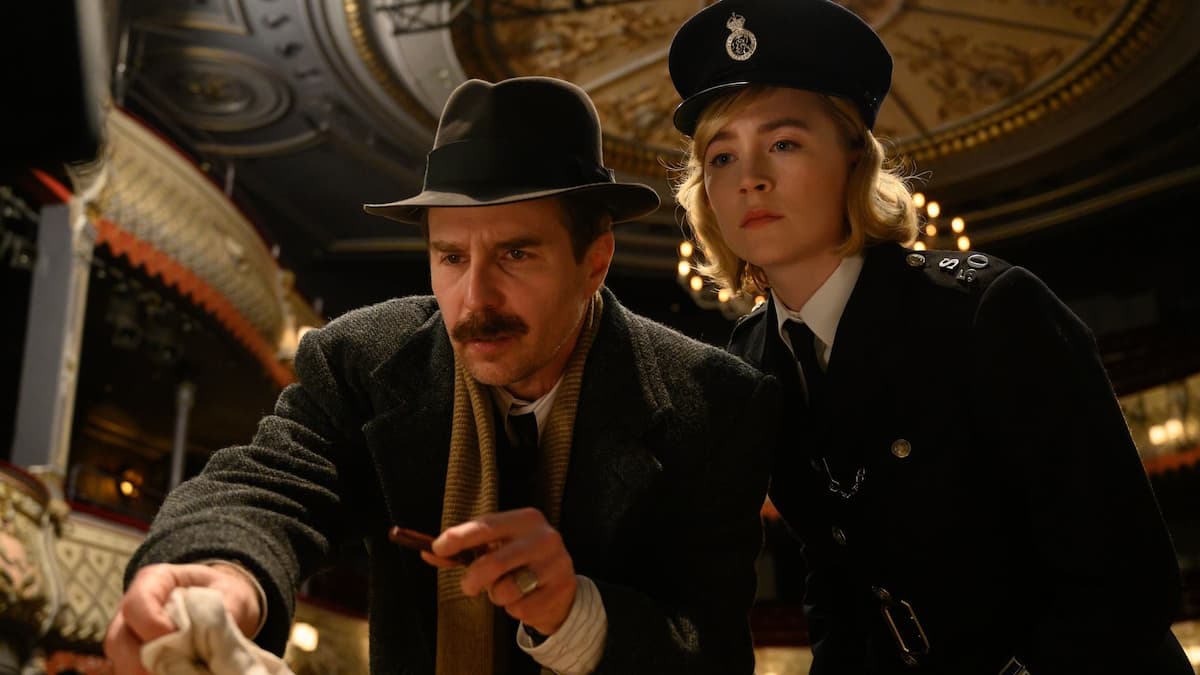 See How They Run is a self-aware whodunnit comedy that reflects on the tropes that are typical of the mystery genre. The film stars Sam Rockwell and Saoirse Ronan as two police officers in 1950s London who are thrust into a mystery while investigating the death of an American filmmaker. The American in question was trying to adapt one of Agatha Christie’s most famous works, a play by the name of The Mousetrap, into a film, something that is seemingly at the root of the killer’s motives in the film. But is it actually? You’ll have to see the movie for yourself to find that out.

Upfront, I’ll say that I have mostly positive feelings about the movie, with only some slight critiques. On the one hand, the film is incredibly self-aware, and there were multiple moments that I found genuinely funny and charming. Then on the other hand, the way that the film’s story is told leaves a tiny bit to be desired.

Let’s start with the positives of See How They Run. First of all, the dynamic between our two leads is incredible, as they play off of each other exceptionally well, making the two characters immensely likable. Rockwell’s character is a play on iconic detectives like C. Auguste Dupin and Christie’s own Hercule Poirot, with an exciting twist making the character feel different and fresh from other detective leads.

Yet, while Rockwell obviously does great and holds his own, Ronan is the one who steals the show. This is a true feat and testament to Ronan’s acting as her character, Constable Stalker, could have been pretty annoying. Thankfully this is not the case, though, due to the actress’s incredibly endearing nature and on-screen presence.

See How They Run is also extremely visually appealing, from great locations to fantastic outfits, with the movie making great use of the 1950s setting. One choice that the film makes in particular when it comes to visuals is that there are often scenes with events happening in multiple shots that are being shown side by side. This stylistic choice almost always felt like it added something to the scene, making certain moments in the plot all the more memorable because of this choice.

One of the more intriguing elements of See How They Run is the aforementioned self-aware commentary on classic whodunnits – specifically, Agatha Christie’s stories – as the film revolves around one of her works. The movie’s opening is evidence enough of how much the filmmakers are aware of the tropes they need to play with. Though thankfully, as the pic progresses, the references get less explicit, allowing the movie’s plot and leads to take center stage. It’s an excellent choice, as it would’ve been annoying if the film held your hand for its entirety.

Now unfortunately, it is time to talk about the negatives, with the most significant issue involving the overall story. As stated earlier, the script is, for the most part, intelligent and witty, but this isn’t completely the case.

For starters, the script’s focus on Rockwell and Ronan’s characters means there is hardly enough attention on the side characters. This makes the overall mystery a bit of a bore at times since none of the side characters really ever get developed in a way that asks the audience to care about what is happening to them; you only care about the detectives. While this isn’t necessarily uncommon for whodunnits, you usually get to see and interact with the suspects a bit more than you do here, which typically results in more compelling characters, which sadly isn’t the case here. Yet, for me personally, the dynamic between Rockwell and Ronan more than makes up for this, as their relationship is more of the focus, especially in the middle of the movie.

The film is only just over an hour and a half long, which is an unusual length in today’s day and age, a fact that only allows the film to focus exclusively on the two leads. All in all, the whodunnit is lacking a bit here, as even the revelation in the film’s climax was a bit more confusing than it should feel. There is a wrinkle to the plot just under two-thirds through the movie that genuinely surprised me though, and kept me hooked, so that’s a major positive in my books.

It’s important to mention that one of the other surprising wrinkles in the film may cause some people, specifically the fans of the play The Mousetrap, to find the third act frustrating. Instead of being a fun parody, it feels like it is instead mocking not only the play but also shows a particular real-life figure in a bit of an unflattering way, at least when it comes to their motivations. It didn’t necessarily bother me per se, but I can absolutely see it rubbing some people the wrong way, so I felt like I should still mention it here.

With these criticisms being said though, the film is overall a lot of fun, and despite the critiques, it still is certainly worth checking out whenever you can. If you’re willing and wanting to make the trip to the cinema, See How They Run will be available exclusively in theaters on Friday, Sep. 16, in the United States.