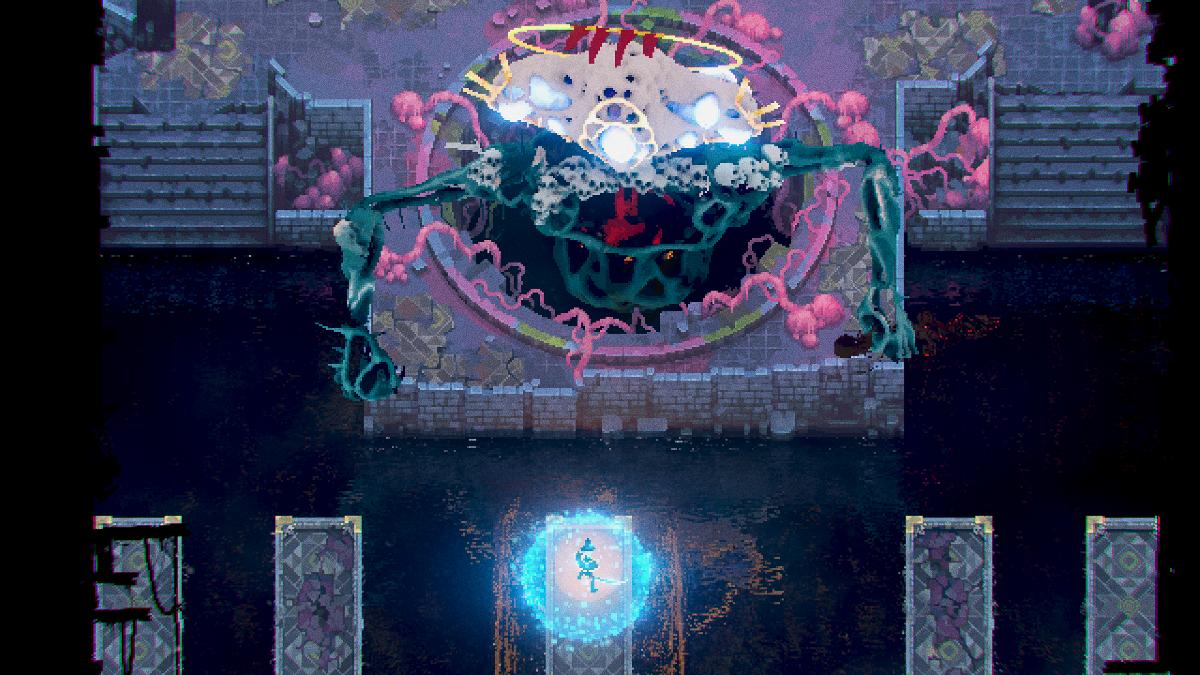 Every once in a while, a game appears in the indie scene with an ingenious idea that comes from mashing up iconic games and manages to create something noteworthy. Usually, it has gorgeous, hand-drawn pixel art that blows away viewers or has a compelling atmosphere that sucks you in from the get-go. Loot River captures all those qualities and has much more going for it; however, pieces of its gameplay and how it all comes together hold it back from how great it could be.

Developed by straka.studio and published with the help of indie fund SUPERHOT PRESENTS, Loot River is a procedurally-generated dungeon-crawler action roguelike that combines weighty Dark Souls combat with spatial block-shifting traversal from the likes of Tetris.

It’s an unlikely yet clever genre blend that is perfect for the arcade vibe you get from playing roguelikes. Because it’s procedural, every run can be drastically different to where a new approach will be needed to pass a particular section.

And even when you’re at the start of your fifth or eighth run, there’s still a measure of freshness going through the early biomes because of branching paths and varied puzzle blocks that makes getting to the end a puzzle in and of itself.

The game’s story isn’t a strong point but rather an intriguing setup that solidifies what you’re doing. You die early into the game from an unexpected boss and get revived into a world in stasis that can only end if your character defeats the threat holding it all together. But the tricky thing is that alternate dimensions need the same treatment, and you’ve got no way out. So your hunt begins.

In standard roguelike fashion, you’ll go through labyrinths fighting bestial abominations, gain randomized loot, and repeat the process if you die. And eventually, you can unlock weapons, potent spells, and headwear that opens up room for different builds and play-styles by collecting the in-game resource called Knowledge.

You’ll accrue Knowledge in different zones as you defeat The Legion, a horde of beasts from alternate realities in purgatory limbo, and deliver those resources to your nomadic associates hanging out in the hub area coined as The Sanctuary.

Like Dark Souls, you’ll come across NPCs that will travel to your haven. And conveniently, they will have services open up that range from giving you a protective magic shield that pushes mobs back or a ghoulish mask that scares them away.

One of them, an alchemist named Soap, will often ask you to give up some health potions, and if you do so, it’ll limit how many times you can recover in a zone. But when you return to The Sanctuary after a run, he’ll give back double the number you gave him. Then there’s the resident bard, Finnegan, to who you can donate gold. It’ll help make his songs better, and you’ll gain a nifty item for your kind contributions.

Unfortunately, everyone else operates more like shopkeepers or has something to do with artifacts, which are items that can increase the number of enemies or change the properties of monsters in different biomes after you complete the game.

Besides that, the NPCs don’t have much else going for them. Although, they will react to your progress by either patting you on the back with a nice comment or sourly reminding you that you’ve only made baby steps.

Sometimes you’ll catch a bit of morbid lore out of them that can piece together the events that led to the endless loop you’re inside, but they are disjointed and lose relevance when the heart of the game boils down to dungeon-crawling.

Speaking of, straka.studio did a fantastic job designing Loot River’s labyrinths around the viability of its Tetris blocks. For example, inside the first biome are fire traps that can set your Tetris block on fire. Combining them with others will spread the flames, causing your encounters with monsters in the area to become tighter and more dangerous.

Each biome has different blocks: such as laser beams on top of them or another with stairs that connect to lower-leveled blocks. It shakes things up enough to stay true to the roguelike formula of increasing challenge and introducing new features.

Because of that, you’ll often pause to consider how you piece together blocks, whether to venture further to open a treasure box or how best to approach a slew of enemies. It is the most enjoyable thing about Loot River because it blends what makes Tetris engaging: allowing you to build a winning strategy by putting blocks in the right places that make sense to you.

Loot River’s real-time puzzling attributes are a refreshing stamp on the roguelike genre, without a doubt. Yet it falters in ways that can completely break your experience and takes a few steps back feature-wise, making the early hours of re-running an absolute nightmare.

Because Loot River tries to replicate Dark Souls, the limited space you have on some Tetris blocks makes dodging and charging attacks very difficult at times.

In one instance, you could get cornered on a small square with hard-hitting mobs with nowhere to run. Another situation pits you against a big pack that you could wipe out with a charged attack, but there’s never time to do it because enemies are way too fast. Parrying, while super good once you get familiar with it, is no help if that pack is swarming you.

Surprisingly, boss fights in Loot River actually work with the Dark Souls-styled combat. However, I will admit there are some wonky moments with the first boss’ hitbox, possibly becoming the reason in the future why some players die because their weapons are short or just bad in general.

But when it comes to zone progression, combat problems become worse because Loot River is a procedurally-generated roguelike. A new run could put you in the grave early if you get unlucky enemy spawns. And there’s no way to switch up your equipment to give yourself an edge.

Losing Knowledge after dying can seriously handicap you to the opening items you have until you reach a certain point in the game. Even if you push past that point and unlock cool weapons or a neat headpiece, you’ll start with the standard setup for a new run and randomly earn those items rather than giving you the ability to choose a viable kit you like.

With Loot River being this indefinite loop that packs a roster of different abilities and equipment, it’s strange that it doesn’t give a player options for their loadout rather than leaning heavily into randomness.

The only manual choice in the game is choosing between three arbitrary charms you pick up randomly, such as a small parry heal or letting you knockback an enemy after three weapon attacks. While good to spice up an entire re-run, there’s still that randomness of what you can get and what you can do that doesn’t let the player experiment at the outset of their run.

In light of Loot River’s shortcomings, it’s still a worthwhile title to play. Flicking Tetris blocks through an astonishingly fluid river is so satisfying. And while I have issues with the combat, the weapons and spells are fun to use when they work. If Loot River gained a roadmap of good changes and content to add to the pile, it could stand toe-to-toe with some heavy-hitters leading the genre. Though, if it stays the way it is, it will remain a good entry but miss out on becoming better at implementing its inspirations. 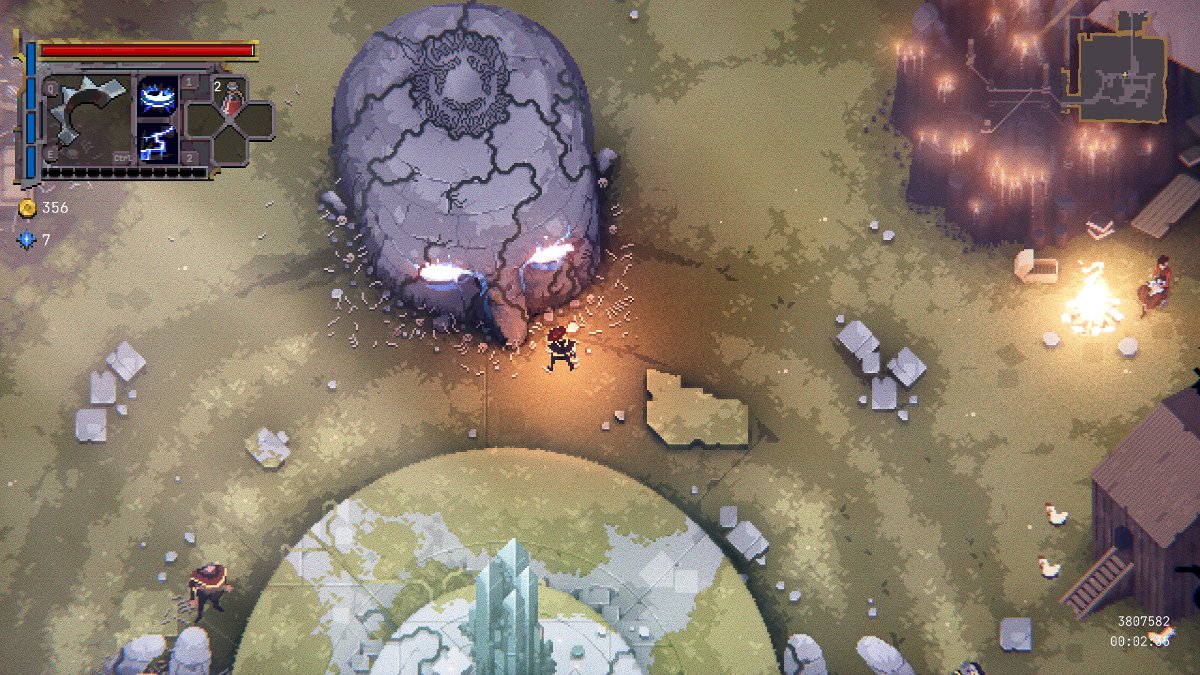