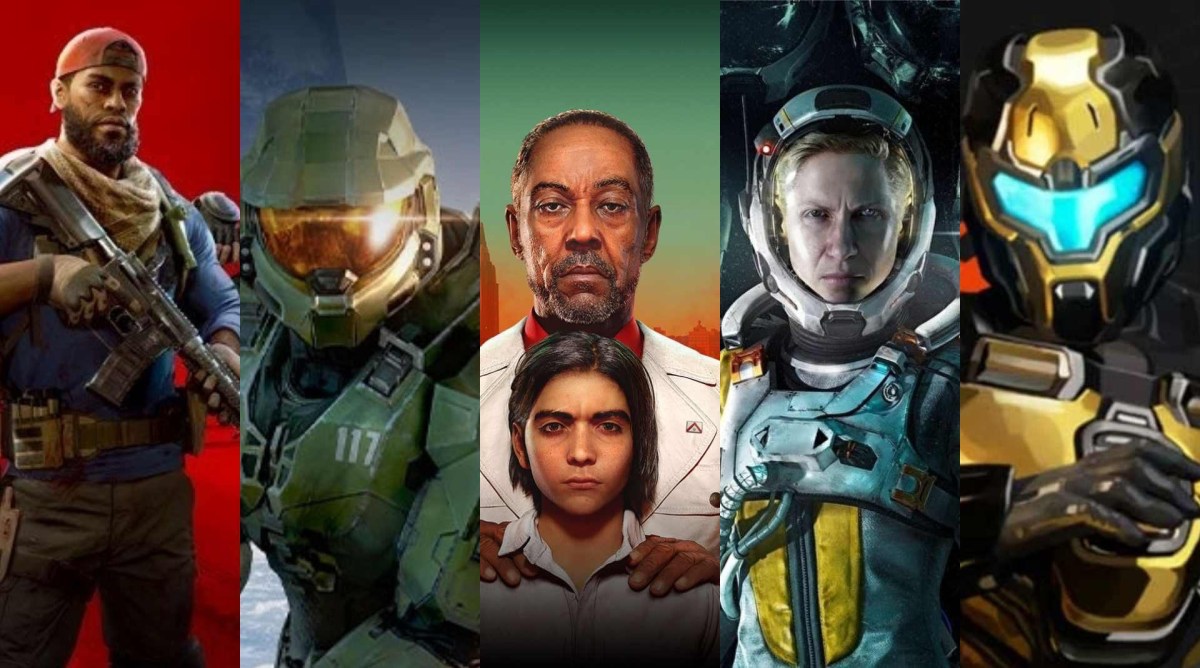 Mark your calendars as Twinfinite’s awards season is officially here, folks! That’s right, throughout January, we’ll be taking a look back at our favorite games from 2021. To kick things off, we’ve put together a list of the best shooters 2021 had to offer.

From first-person zombie-shootin’ action to third-person cosmic horror, we’ve seen a whole smorgasbord of titles that scratch the ol’ shoot-’em-up itch. So, without further ado, here are the best shooters of 2021 as voted by Twinfinite’s staff and editors. Let’s get into it!

Features Editor, Andrew McMahon: The Far Cry series has always been home to some pretty chaotic fun, as its over-the-top action, story, and gameplay can only exist in a video game. Far Cry 6 dishes out all of the chaos that fans know and love while also adding in a few fun new toys to freshen things up.

Combat is as fluid as ever, as protagonist Dani Rojas is able to assassinate and gun down their enemies using brutal combos and tactics. Shooting is also as satisfying as ever, as Far Cry 6 once again features a boatload of guns to unlock and equip.

One big change in this department with Far Cry 6 is that players can unlock and craft new components for their guns that serve to replace skills, making for a more diverse method of choosing what to put in the arsenal.

Supremo weapons are easily the best new toy in the game, as it offers insane super abilities like a rocket launcher that fires off your back and deals extreme damage.

When it comes down to it, there are few shooters released in 2021 that pretty much any video game fan can pick up and enjoy for some mindless fun more than Far Cry 6.

Features Editor, Andrew McMahon: Any time a game is coined as a spiritual successor to a beloved series, there will always be a lot of expectations regarding its release, especially when it has to live up to the high bar set by the Left 4 Dead franchise. Turtle Rock Studios stepped up to the plate and delivered, though, with Back 4 Blood.

While it’s by no means perfect, as PvP is mediocre and bots are about as useful as someone who is AFK, this game scratches the Left 4 Dead itch perfectly. Hunting different types of zombies with a myriad of different guns with your friends is a formula that simply doesn’t get old.

Combine all this with the fun of collecting and trying out new cards that add buffs to your team and enemies alike, and you can see why Back 4 Blood is one of the best shooters of 2021.

Assistant Editor, Dylan Chaundy: Out of all the genres in video games, it’s a tough ask for a startup developer like 1047 Games to break into the crowded first-person shooter market.

However, not only did the Nevada-based studio manage to carve out its own space in one of the most competitive genres in the industry, but it hit the ground running, no-scoped us right between the eyes, and portaled its way straight into our hearts and minds.

Blending Portal-like traversal mechanics with Halo’s snappy first-person shooting, Splitgate is a joy to play, runs like a dream, and boasts a ton of super fun, pick-up-and-play modes that’ll keep you coming back for more.

In the wrong hands, Splitgate could’ve easily turned out to be a derivative knockoff. But kudos to 1047 Games for crafting a slick and sophisticated shooter that not only resonated well with both critics and audiences alike but would ultimately go on to become an instant classic.

Senior Editor, Alex Gibson: The quality of the talented folks at Housemarque has never been in question, but the studios’ ability to pivot from arcadey SHMUP games of a modest budget to a AAA cinematic third-person shooter was likely to prove no easy task. Returnal, though, blew even our wildest expectations out of the water and may well prove the Swedish developer’s big coming-out party on the mainstream stage.

Typical of Housemarque, Returnal places a strong focus on challenging gameplay that feels absolutely brilliant to control. The shooting mechanics are unlike anything else we played this year; more or less a third-person equivalent of Nex Machina, one of the studios’ most acclaimed arcade titles.

With the action now on a 3D plane, however, there’s a new element of verticality to dodging the hails of incoming alien firepower, as well as precision required to shoot back with all manner of upgradeable weapons. The boss fights proved some of the trickiest but ultimately rewarding moments of gameplay this year.

Of course, Returnal incorporates more than just gameplay; in a first for Housemarque, it’s also a story-driven, cinematic experience brought to life with terrific acting and cutting-edge visuals. The coming together of these new elements and the studios’ signature gameplay is something Housemarque fans have been yearning to see for years, and by all accounts, we’re expecting plenty more moving forward after the success of Returnal. Bring it on!

Assistant Editor, Dylan Chaundy: Though 343 Industries‘ lead-up to launch was a little rickety, the Washington-based studio managed to hit it out of the park with the sixth mainline entry in Xbox’s marquee FPS series.

But what makes Halo Infinite the best shooter of 2021? Well, not only did it introduce more open-world areas to explore and discover, but it also implemented a new grappling hook feature, which makes traversal and the moment-to-moment combat feel way more frenetic and fun.

Rounding out the terrific single-player campaign is an exemplary online multiplayer suite brimming with a diverse set of modes and options. Additionally, its new progression system is super satisfying, and the decision to make the aforementioned multiplayer component free-to-play was a stroke of pure genius, too.

Ultimately, Halo Infinite plays to the iconic sci-fi series’ strengths, and it’s great to finally see one of Microsoft’s first-party studios firing on all cylinders. Hail to the Chief, indeed!