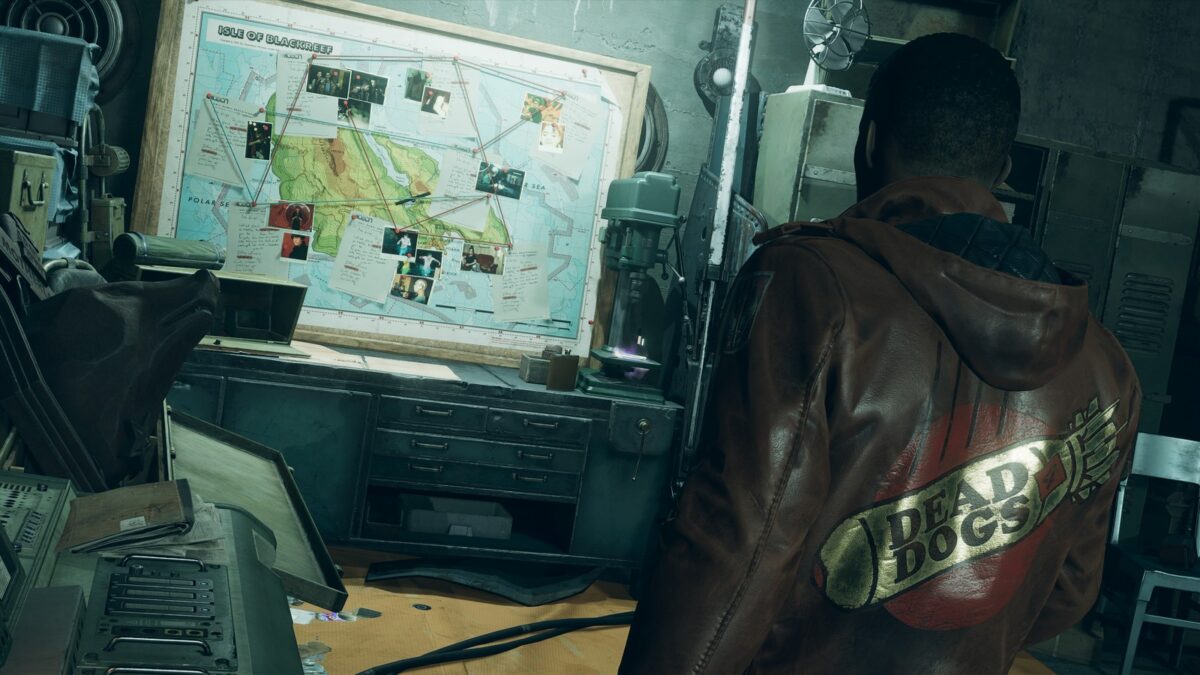 Ever since Deathloop was revealed during E3 2019, I’ve wondered how exactly its unique concept would work. If the gameplay revolves around dying and using what you’ve learned to try and escape the loop, how does that affect the game’s story? Can I explore the setting freely?

Those were the exact type of questions I had going into the recent preview event for the new IP. Much to my excitement, Game Director Dinga Bakaba had plenty of illuminating answers.

The event started with some gameplay footage revolving around Colt, as he is shown waking up on the island shore of Blackreef with amnesia and a wicked hangover. Deathloop’s confused protagonist soon finds out the only way he will be able to get answers and break the loop he’s stuck in is to kill the eight Visionaries before the end of the day.

These enemies are spread across four distinct areas: The Complex, Updaam, Fristad Rock, and Karl’s Bay. Each area has its own unique events and characters that change depending on the time of day you visit it.

Those times of day are separated into Morning, Noon, Afternoon, and Evening. Choosing to visit one of the locations listed above during different times of day leads to time-specific dialogue and interactions you wouldn’t see otherwise.

Players also don’t have to worry about starting every day out from Morning, as you can select the location and time of day are the start of each new loop.

It was also revealed that you’re not on a timer for any of the locations you visit. That means that Colt can stay as long as he wants in each period of the day as long as he doesn’t get killed.

So how exactly does exploration in Deathloop work with that in mind? Are you on a linear path with mission objectives? Or can you go all over and find interesting sub-stories like that of past Arkane titles like Dishonored and Prey? Dinga Bakaba explains:

“We wanted this world to feel alive, so there is a lot of small things to pick up on. I’m quite happy our team took a risky approach when it comes to the side content, making it extremely organic. That is why I don’t call them side missions. They don’t all start the same way.”

This idea of organic investigation is reinforced heavily in the demo, as we see Colt Shifting to different areas, walking around pipes, and using all sorts of different methods to try and accomplish his goal of killing Aleksis “The Wolf” Dorsey. As we mentioned earlier, though, he’ll only be able to accomplish this in certain ways depending on the time of day he chooses.

If Colt decides to go to The Complex during Morning instead of Evening, he might not have the same paths open or even see the same character in that area during that time. As such, you’ll have to compile the knowledge you gain about locations, events, and characters and carry them over throughout each loop to give Colt the advantage.

The way players actually kill Dorsey also varied considerably depending on their methods and timing, as there were options to use brute force, stealth, or a combination of both that revolved around a number of factors. Without spoiling anything, my favorite way to kill him involved finding him during the Evening.

After listening to a conversation, you’re able to piece together a way to kill him without being seen while also using the environment. This quick and efficient method required a blend of sneakiness and perception that is reminiscent of controlling Corvo or Emily in Dishonored.

Bakaba went on to explain how Deathloop rewards players for this type of experimentation in the final half of his answer to the question:

“Sometimes, it will just be that you hear two guys talking about something, and you’ll go there to see what happens. That one thing might not even be a challenge,” Bakaba continued. “It might just be an interesting thing that fills out the world, gives you a narrative nugget, or is something playful to experiment with to see what consequence you get.”

“There are a lot of small things to pick up on everywhere. We tried to not overload the players, so we actually had to cut more than double of the content we ended up shipping.”

Bakaba ended the Q&A by complimenting the team behind the game’s development, stating that their creativity is absolutely staggering. Based on what I’ve seen so far, I can’t help but agree.

Arkane fans will be able to check out that creativity for themselves when Deathloop releases for PS5 and PC on Sept. 14, 2021.