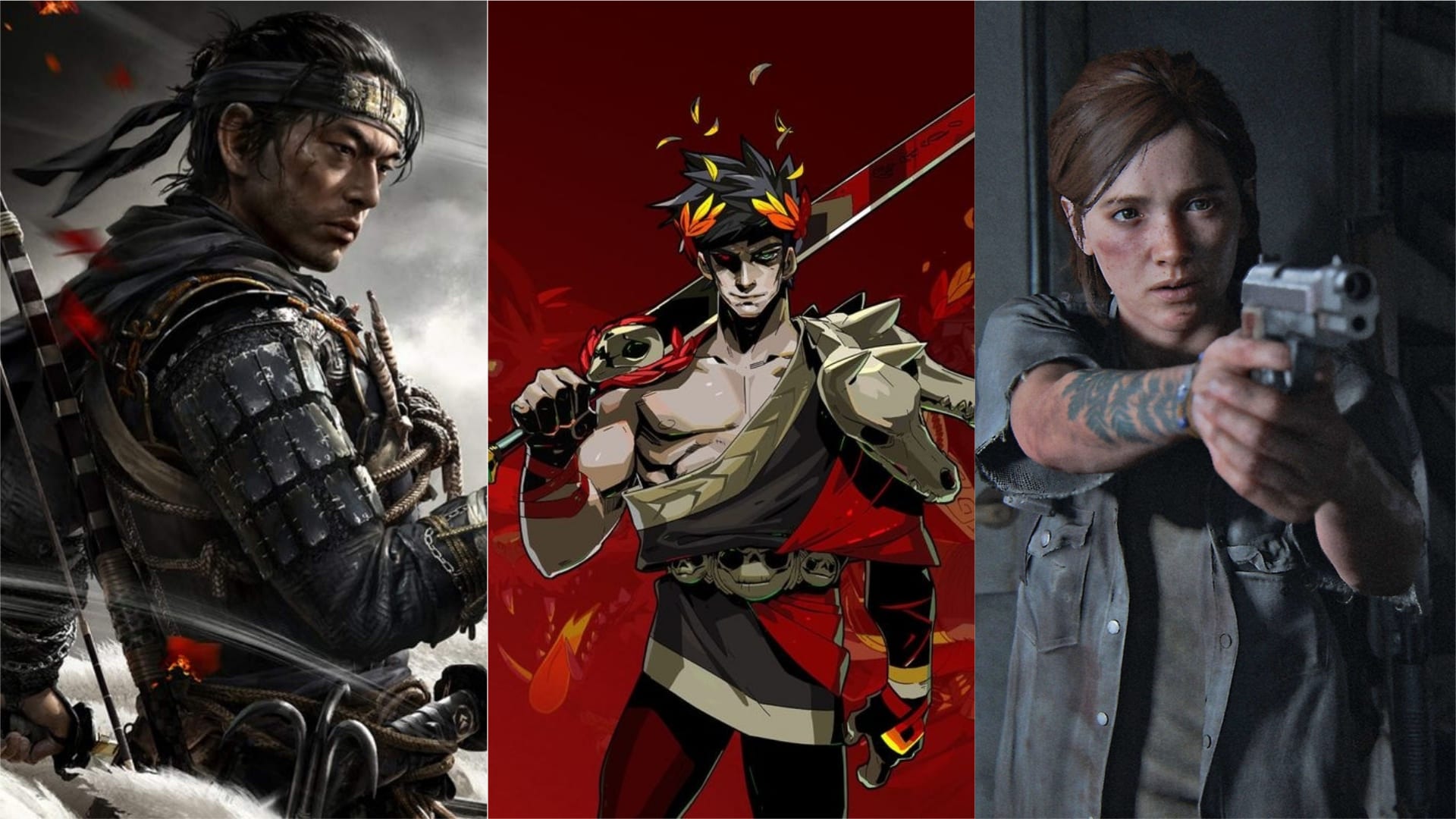 As the eight console generation has drawn to a close, we’ve been graced with some exceptional games that will be fondly remembered for years to come as its final swansong. Here, as part of Twinfinite’s annual award ceremony, we’re reflecting on those with the best storytelling and writing of 2020 and crowning one overall winner. The following games have been voted by our team of editors as having the most compelling narratives and engaging writing.

Senior Editor Alex Gibson: There are no two ways about it: After years of hype, Cyberpunk 2077’s launch was a disaster. The game was rightly lambasted by players and critics alike for a plethora of unacceptable issues, as well as dubious decision-making from the studio’s leadership which almost certainly created what should have been a very avoidable situation.

But putting all that to one side, buried underneath the technical issues and scandal, there’s also no question that Cyberpunk 2077 is a fantastic game at its core. There’s so much it does superbly well, and amongst all its great features, brilliant storytelling is perhaps its greatest quality.

The intrigue of its main plot is captivating right from the off, but it’s after the crescendo of the epilogue that it becomes truly engaging with some epic highs and emotional lows. From there, the story twists and turns as main protagonists V and Johnny Silverhand’s forced relationship blossoms into an unlikely friendship.

Well, depending on how you choose to play it, that is. And therein lies the beauty of Cyberpunk 2077’s branching dialog, which offers different story outcomes according to preference as any good RPG should.

Then there are the excellent side quests, which often feature stories and characters just as sharp or even exceeding the quality of the main quest content. I couldn’t get enough of the sassy Panam or the detective Rivers the upstanding family man.

Indeed, Night City is a dystopia at its best when these sorts of compelling characters are breathing life into its gloomy streets, and they’re the reason I’ll be returning to the game once more when a proper next-gen version arrives in 2021.

News Editor Giuseppe Nelva: For some, 13 Sentinels: Aegis Rim was one of 2020’s surprise hits, but for those familiar with esteemed studio Vanillaware’s portfolio it was always likely to prove another masterstroke.

Indeed, its latest labor of love is simply the evolution of their craft, pairing absolutely beautiful art, a rich cast of extremely relatable characters, and a rather crazy (in all the good ways) and engaging story.

It’s a game that can stand on par and surpass the work of teams that can count on resources Vanillaware will never be able to even dream of, giving personality and charm to the characters not with technology and expensive techniques like performance capture, but via unique art and the pure quality of its writing and storytelling.

Refreshingly, too, the game features a Japanese flavor front and center, which makes the entire saga feel authentic in a manner that’s becoming increasingly rare in the mainstream.

13 Sentinels: Aegis Rim is simply a gem, and George Kamitani’s pride for the game expressed upon its western release is certainly well-placed.

Reviews Editor Zhiqing Wan: To be completely frank, the story of Hades itself isn’t exactly groundbreaking, nor does it do anything to push the envelope. The reason why it’s so good, though, is because of how it’s incorporated into the gameplay.

As a rogue-lite game, Hades is designed to be played over and over again. Taking control of Zagreus, your goal is to try to escape the underworld while your father and his lackeys do everything in their power to keep you trapped down there.

With that premise in mind, of course you’re going to die over and over. But much of that frustration is alleviated by the fact that that’s how the story is meant to play out.

Each time you die, returning to the House of Hades is actually exciting since you can always expect there to be new dialogue from NPCs, as well as various other changes happening around the area.

New characters are showing up all the time, bosses even have a new dialogue to match what’s going in the story and what you’ve learned, and it’s the main factor that keeps you going. Even after you’ve failed about 50 times… Now, excuse me while I go try to clear this area again!

Senior Editor Alex Gibson: Ghost of Tsushima’s most striking qualities were largely known to players long before it had launched; its gorgeous aesthetic, the minimalist HUD and guiding wind system, and its scintillating sword-play.

By contrast, the depth of storytelling and quality of writing that truly made its characters come alive was one of the game’s huge surprises, and now having played it I consider them equally as brilliant.

Sure, Jin’s personality can feel a little one-note at times, and yes, the constant references to “honor” are perhaps too on the nose in some scenes. But both those niggles actually serve their purpose in the wider context of the story as Jin finds his feet as an individual, and his love of his people and island stirs him to break a code he has felt duty-bound to live by since childhood.

There are deep themes and interesting messages to be interpreted throughout the tale, certainly. And if Jin’s personality is slightly muted, the friends he makes along the way are anything but, like the fierce Lady Masako, the wise warrior monk Norio, and the comic relief of Kenji to name but a few.

Overall, I found it a memorable affair that delivered on the sorts of twists and turns, and emotional highs and lows that are essential for any great story. I look forward to seeing what Sucker Punch can do with the inevitable sequel.

Winner: The Last of Us Part II

Guides Editor Chris Jecks: The video games industry is fantastic at storytelling. It offers a broad range of perspectives and experiences, which, given the recent pandemic backdrop, is a welcome distraction.

Few manage to deliver on the same scale as The Last of Us Part II, however, which not only delivers an emotional rollercoaster of a narrative but completely flips everything we know about the characters and the world from the first game on its head.

The world building that Druckmann and the rest of the development team at Naughty Dog has managed to achieve is not only the best of the year, but surpassed the lofty expectations set by its predecessor.

It’s difficult not to come away from The Last of Us Part II without feeling something about some of its characters. Its twists and turns are so organically written into the narrative that you seldom see them coming.

It gives them that added impact, often leaving you feeling like you need a moment to come to terms with everything that just happened after a few hours of playing.

But then it drags you back into its gritty, and often depressing world. Its story of vengeance, and thought-provoking commentary on morality and its juxtaposition to personal wants and desires. A reminder that one perspective cannot tell the full story. If you know, you know.

Over the course of its 15-20 hour narrative, I saw different sides to Joel and Ellie that I never expected to. I came full circle on Abbie, and in ways, finished the game still a little conflicted on which side of the argument I’d land on.

Not because the writing hadn’t done its job, but the contrary. Parallels could be drawn between my own personal biases and those the characters so clearly had.

The Last of Us series portrays a dark, dismal world, and people need their own glimmer of light within it. Should that come at the cost of others? The greater good? Does revenge on those that inflict pain upon us really quell that raging inferno of hatred and bitterness we feel inside?

The Last of Us Part II raises all of these questions, and often leaves you to determine your own opinion. It left me in a state of contemplation for days after I’d finished the next chapter of Joel and Ellie’s story in a way quite literally no game has since its predecessor.

There’s so much to unpack in The Last of Us Part II’s narrative, and so much discussion to be had around it that cannot be surmised in a mere blurb.

It’ll undoubtedly be part of the video games narrative discourse for years — maybe decades — to come, and only goes to show Naughty Dog’s outstanding narrative prowess. Don’t just play The Last of Us Part II. Truly engage with its narrative, and your experience will be all the richer for it.