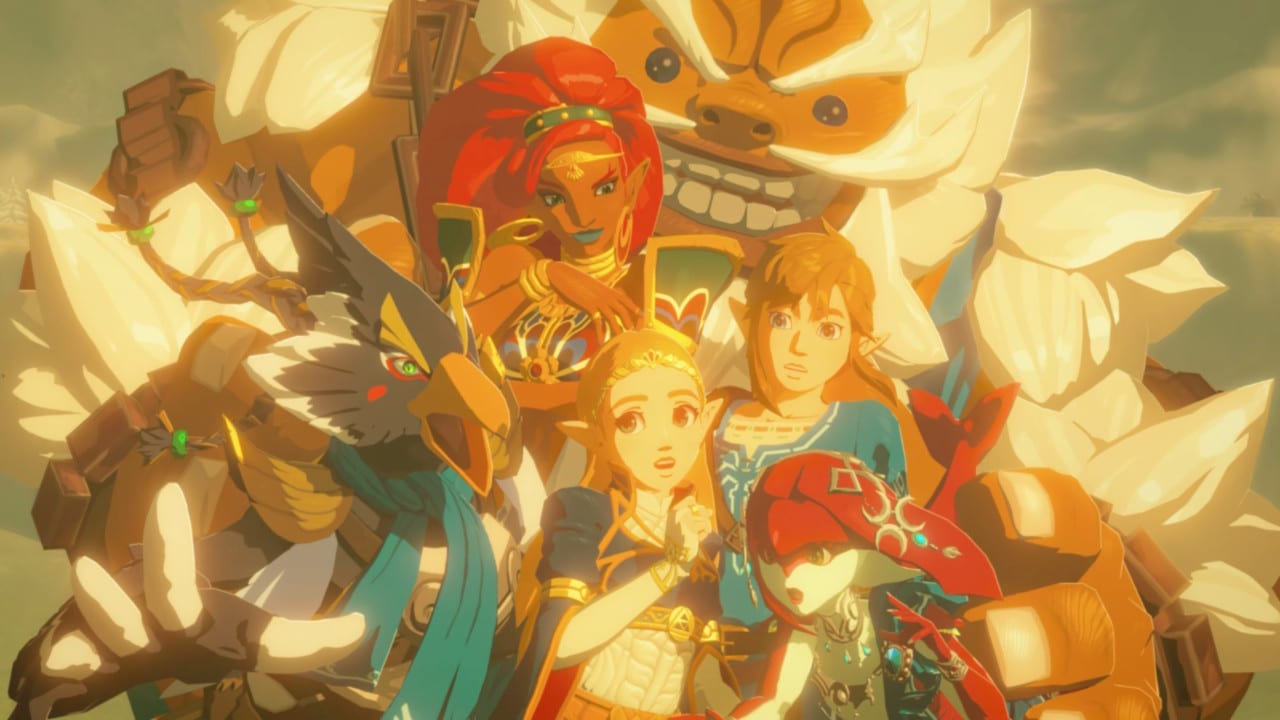 Throughout the Zelda franchise, there have been plenty of friendly species that Link and his cohorts have met during their adventures. Most players know and love species like the big, friendly Gorons, the elegant Zoras, and the powerful Gerudo.

But there are plenty of other species in Zelda history with a whole lot of untapped potential that deserve another chance in the limelight. Here are our 10 Zelda species we think are worth another look.

Let’s start with a familiar face first: The Deku are well-known to most Zelda fans, due to having pretty prominent roles in Ocarina of Time, and having an even larger one in Majora’s Mask. In the latter game, which is still a favorite for many, we got to see an entire Deku Kingdom, and Link himself even became a Deku Scrub via Skull Kid’s magic.

However, since Majora’s Mask, the Deku have been missing from the series, with the similarly plant-themed Koroks likely taking their place.

But outside of both races being plant-based, the designs and feel of the two species are completely different, and both could easily coexist in a game together.

These monkey-kidnapping business scrubs ought to be given another shot as The Legend of Zelda’s original plant-based race.

The Twili might not have been as common as the Deku were in their games, but they made up for it in terms of plot importance. Midna and Zant were two of the primary players in Twilight Princess, but the game’s semifinal dungeon did give us a look at some less-pivotal members of the species as well.

Shame none of them did a whole lot of talking, though.

Much of the history of the Twili is, rather fittingly, shrouded in mystery due to the events of Twilight Princess, but future games could give us more of a look at them beyond just Midna and Zant.

If certain fan theories are correct, perhaps the blue-green magic in the Breath of the Wild Sequel’s trailer, very similar in color to Twili magic, could indicate that we might be seeing them again sooner rather than later.

If we were doing a contest for cutest Zelda races, the adorably pudgy bird-plant Kikwis would certainly have the win in the bag. But that’s neither here nor there.

Kikwis featured in the early game of Skyward Sword, guiding Zelda to the game’s first temple after she falls out of the sky. Shortly thereafter, Link follows, searching for her, and scares one of the Kikwis half to death by swinging his sword around. Rude!

As another plant-based species, Kikwis have some competition with the Deku and the Koroks, but there’s plenty of room for all three to exist side by side.

Each race could be paired to a different biome, with the Deku living in the swamp, the Koroks living in deciduous forests, and the Kikwis making their homes in deep jungles. It’d be a good way to add that much more diversity to the games’ environments.

Jumping away from home console Zelda titles for a bit, we have the Subrosians, from the Gameboy Color title Oracle of Seasons, which definitely deserves the Link’s Awakening remake treatment.

These cute little cloaked fellas make their home in the underground city of Subrosia, which is littered with volcanoes and pools of lava. Despite wearing what looks like very-flammable shrouds, the Subrosians don’t mind at all, happily taking baths in the lava. Maybe those cloaks are just their bodies after all?

If their fun, Shy Guy-esque designs aren’t enough for you to want them back alone, Subrosians could make for a unique species by being completely subterranean, just like in their home game.

Imagine delving deep into an abandoned-looking cave, just to stumble across a whole city of these cute little guys shuffling around, collecting ore and bathing in pools of magma.

It’d certainly be an exciting moment, that’s for sure!

We covered the Oracle of Seasons’ species (and talked about it deserving a remake), so it’s only fair that Oracle of Ages get the same treatment in this list.

The Tokay are a race of odd-looking lizard folk, with strange melon-like heads, bug eyes, pot bellies, and single-toed feet. Don’t let their looks fool you, though – these guys are faster and smarter than they seem. When Link’s vessel crashes on Crescent Island, they scuttle the wreck with lightning speed, making off with all of Link’s items in a flash.

In the end though, the Tokay are just opportunists, not villains, and Link reclaims his items by doing them a few favors. A similar role would fit well in a modern Zelda game.

Tokays would be met with concern from other Zelda races, not because they’re particularly strong or mean-spirited, but because they have a tendency to nick anything that’s not nailed down and bolt, just for the fun of it.

Getting back into more familiar territory, we have the Kokiri, a species almost any Zelda fan is likely familiar with. Despite being so well-known, they only really have the one appearance in Ocarina of Time to their name, outside of a cameo in Wind Waker.

It’s a shame that such an iconic species that many series veterans started with simply got left in the lurch after their debut game.

Canonically, this is because the Kokiri species ended up evolving into the Koroks. That’s not stopped other species in the past though, as the same was said of the Zoras and Rito before they both were featured in Breath of the Wild together.

If Zoras and Rito can coexist, so can Kokiri and Koroks. Perhaps the “evolution” mentioned in Hyrule Historia could work more along the lines of Pokemon than Darwin in the end?

Skyward Sword and its finicky motion controls might not have aged as well as the rest of the series, but its additions to the Zelda race lineup were top notch.

One of those species, the Mogmas, inhabited the Eldin Volcano section of the game, and looked like a sort of mole-dog hybrid. These burrowing buddies were treasure hunters, scouring the mountain for Rupees and valuables, while also aiding Link in his quest.

Mogmas already occupy a unique niche among the Zelda cast as treasure fiends, so why not expand that idea in a future appearance?

Mogma mining operations and the like are the perfect explanation for unique caves and dungeons to explore. Toss in the Subrosians from earlier, and you could even have some Mogmas that get into the business of trade, acting as go-betweens for the surface world and the one underground.

The Picori, also known as the Minish, are probably the one species on this list that we know came closest to a return. As shown in a BoTW development video posted to Nintendo’s official YouTube channel, these teeny-tiny sprites almost made it into the game, but were cut in the end.

In the original game, Link had to shrink down to interact with these mousy folk, who helped essential aspects of the game, like fusing kinstones.

Chances are, these guys also have one of the best chances to return, seeing as how the Breath of the Wild Sequel looks to be reusing other concepts cut from its predecessor.

Tiny villages of Picori people could dot the lands, requiring Link to shrink in order to gain entry, lest he crushes its people beneath his boots. If you ask us, a shrinking mechanic in BoTW 2 alone makes this an enticing prospect.

Skyward Sword gets its third entry on this list of Zelda races with the LD Series, a species of sentient robots that call the game’s Lanaryu Desert their home.

These guys come in two forms – taller, more humanoid pirates, and the friendlier, smaller excavators. While the former acted as minibosses throughout the game, the latter actively helped Link with the use of Timeshift Stones and vessels with which to cross the Sand Sea.

Both varieties of LD bot would be more than welcome in future games – it’s not like the series has a surplus of robot allies, after all. Placing these out-of-time robots in the desert alongside the more traditional Gerudo would make for a very interesting dynamic, one we’d love to see explored.

Maybe these guys could be the ones digging up the jewels that the Gerudo use in their clothing? Or perhaps the bots’ excavation schemes puts these two sets of desert dwellers at odds?

Alright, let’s get really out there for our last entry with Four Swords Adventures’ Zuna tribe. These intelligent, cactus-like people might just be one of, if not the most obscure official Zelda race in existence.

Appearing only in a single town within Four Swords Adventures (in of itself an outlier of the series), the Zuna make their home deep in the Desert of Doubt. Aside from the fact that they built the nearby pyramids, little else is known about them.

Why bring these guys back then, if they’re so obscure? Well, in addition to the idea of a cactus species being extremely cool, they’re basically a blank slate. All sorts of unique ideas could be applied to them without compromising their original game.

Chances are though, that at this point, Nintendo themselves don’t even remember that they made these guys, making their return incredibly unlikely. But now at least you know of them!

With that, our list of Zelda races is complete! So what do you think? Do you also miss the Mogmas? Did we skip your favorite species? Do you know of a race more obscure than the Zuna? Let us know in the comments below!