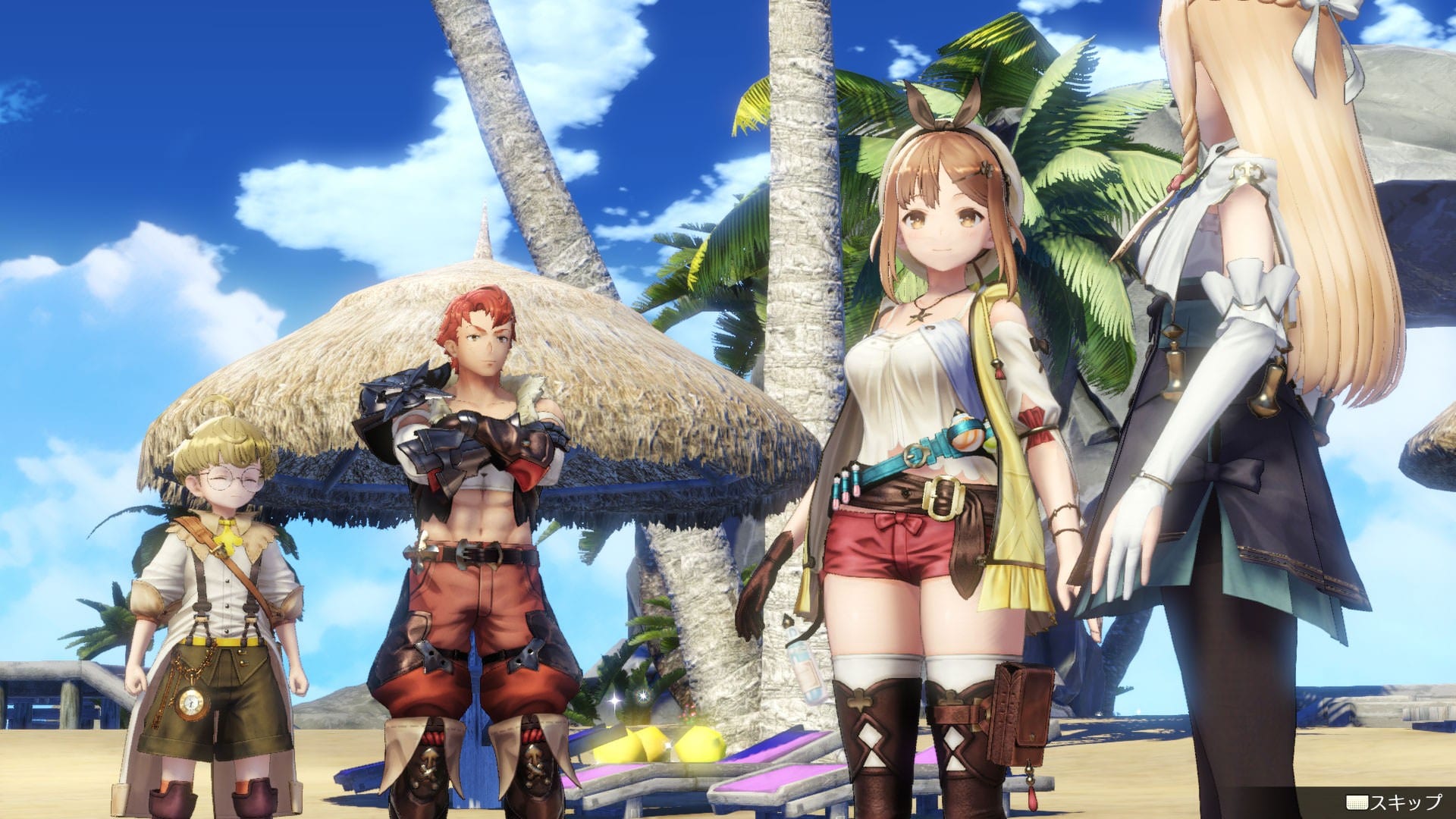 Atelier Ryza: Ever Darkness and the Secret Hideout on PS4

Atelier Ryza is the third Atelier game release this year, which sounds daunting but it’s one of the most steadily released JRPG series and somehow still manages to find ways to keep new installments feeling like improvements. While there are nine Atelier games on the PS4 (including Ryza and the first three for the PS3 re-release) Ryza proves to be the most accessible to newcomers.

Atelier Ryza focuses on a teenage girl named Reisalin “Ryza” Stout. The main characters of Atelier games often have a rather weird or long name that is shortened and made cute, it’s a staple for the Atelier series. Ryza and her two friends, Lent and Tao are Kurken Island’s local lazy teens, perpetually aimless and goofing off.

One day, as Ryza intends on skipping out the tasks asked of her by her farmer parents, she talks the group in an adventure to the mainland as she has heard word of an important merchant arriving at Kurken Island soon. Upon this trip they happen across a girl their age who had wandered away from her caravan and merchant father.

After saving this girl they trio are introduced to a very mysterious man and woman who progress the story and drive the character development.

The man, Empel, is an alchemist and the mention of alchemy strikes the fancy of Ryza, who had never heard of such a thing before. Empel is also a scholar and starts to tutor Tao into how to read the unknown language within books left by his late grandfather. Lent, being the son of an abusive, alcoholic father is impressed by the woman Lila’s combat prowess and sets his sights on getting stronger to not be pushed around by his father as easily.

The characters and their growth is one of the biggest standouts to Atelier Ryza. In previous games only the main character truly matters, and she (he, in only one single case) is usually surrounded by lackeys who don’t really do anything themselves.

With Atelier Ryza, Lent and Tao have their own goals, this makes the story feel like the three are friends, rather than just a couple of characters working for the protagonist. They progress alongside Ryza as she learns alchemy. While we never see anything they do firsthand, there are many scenes with the three of them discussing their progress that pushes the warmth of the story.

The inclusion of Lent’s situation at home is a new level of serious storytelling (aside from the usual world ending catastrophes) for the series, treading into serious waters in worlds that are usually bright and cheery.

Yet, Lent’s situation is never given a big enough resolution and while he often finds his way out of the abuse, his father is never reprimanded and the islanders frequently turn a blind eye to his alcoholism. Ryza’s parents also entirely disappear for a majority of the story once she gets her alchemy up and running.

There is never a challenging part of the story when it comes to where to go next. There is a useful menu that lays out past and current objectives and ever present is a waypoint on the local map in the shape of a colored exit telling you which direction to head in to continue your journey. For a game that requires a ton of returning to the atelier for even the quickest of item creation, this is a nice system to have.

Alchemy (actual creation is referred to as synthesis) in Atelier has up to now been that you have to have the required set of ingredients to synthesize the item you need, but with Ryza now you only need one main item and the rest are purely for enhancement. This change has made it so that synthesis is the most approachable and intuitive that it has ever been. The recipe layout is clean and easy to follow, with upping the quality or adding traits now possible without spending forever to find just the right material in the field.

Learning new recipes is also one of the best mechanics, as in past games it sometimes required arbitrary tasks. In Atelier Ryza it happens during synthesis, you only need to unlock the path towards the proper circle and have the correct ingredient on hand.

Item gathering is much more involved than it ever has been, while there are spots to simple collect, there are sources (such as trees, rocks) that can produce different ingredients depending on what gathering item is used, be it hammer, axe, or explosive. This means that while you may have run through a starting area and collected everything, there is always a reason to return with a new tool and go back over it, because there is sure to be items that you couldn’t get that are required at your current progression level.

When it comes to exploration, the game gives a few large areas to run through, in the beginning but is severely limited by story. While by no means could the game be called linear, it’s just occasionally a pain to be ready to move on but hit the “we shouldn’t go further” wall when you’ve gathered and fought everything in a given area.

Moving around the world map, however, is perfect. In the beginning, the touchpad serves as an instant teleport to Ryza’s room (where the cauldron is pre-hideout) without any hoops to jump through. Later in the story this simple fast travel system makes it possible to go anywhere at anytime, making running out to quickly get ingredients a cinch.

When it comes to getting around Kurken Island, using the world map method is a little less precise, as the island has bulletin boards all over for fast travel within it, with the ability to go to areas within the main sections, whereas the world map will only place you at the entrance to an area.

Atelier Ryza gives a means to explore in a world of your making with the Gathering Synthesizer, a handy alchemy doodad (sort of looks like a still) that allows you to create what is essentially a pocket dimensions to visit and collect ingredients right there in the atelier that only costs one material of your choice to use.

While this is a nice mechanic, you still have to have spend the right material or something close to create the world (it’s actually a somewhat small field) in the bottle. It never felt any more useful than simply visiting the place the material could be found, and apart from the one single time the story required using it, it mostly sat ignored unless the material needed was an annoying trek or fight to obtain.

The game itself is a very gorgeous sight to behold. Every map area brings with it new surroundings that give off the perfect ‘exploring a new world’ feel. Character models feel like they have been worked on and now seem much more expressive. Even as the game trends more into the usual ‘world is ending’ fare, the environments never lose their charm and awe-inspiring detail.

On the island are a handful of people who will give out side quests. None of them are very deep, and with the odd monster slaying, the majority are fetch quests that do occasionally require learning new recipes to complete. While the side quests are completely optional, some do reward books for learning new recipes so there is always the possibility it evens out to them being worth completing.

When it comes to combat, it’s obvious the team behind the game wanted to change things up for the better. For the longest time, Atelier has been a standard JRPG in terms of combat, keeping things entirely turn-based. While you can still consider there to be turns in Atelier Ryza, battles play out in real-time and require a much more direct attention than hitting the attack button absently. Gone is the system of controlling every character, as you can control whoever you want, but you can’t stack up orders, so the other two characters act however they wish, for the most part.

This change in combat has better balanced the enjoyment of the game, where it used to be all gathering and synthesis as the fun activities with combat just being something you had to do for ingredients or scripted story events. The combat has never been really enjoyable, and while it can’t be said that battles now are the best part of the game, they are at least not always the biggest chore this time around.

At the start of the game you have a party of three people, which is conveniently the max number for battles, but by the end of the game your party doubles in size, while the battle limit stays at three. Combat formation has two rows, but for reasons unknown, some characters are first row only and some are second, no exceptions. There can only be two in the first row and one in the back. All of the strange limitations spoil the desire to play around with it by the time you have new people so you might also find yourself sticking with the default three instead of experimenting.

The best thing that can be said of Atelier Ryza is that it is accessible. Down to its core it is meant to be enjoyed by new players or by series veterans who might be looking for a nice light addition to the franchise. This is the ultimate distillation of what makes Atelier so great in one package, with better combat to boot. Any previous notion of the best jumping on point is erased in favor of Ryza and the enjoyable journey that the game presents.

Should You Buy Atelier Ryza: Ever Darkness and the Secret Hideout?
Definitely! Whether you are a fan of the series or curious about this long running JRPG, this is the best entry to climb about the Atelier ship.

Who developed Atelier Ryza: Ever Darkness and the Secret Hideout?
Gust.

What is the release date for Atelier Ryza: Ever Darkness and the Secret Hideout?
Oct. 29, 2019.

If you buy Atelier Ryza: Ever Darkness and the Secret Hideout, check here on Twinfinite for guides if you need a little extra help.