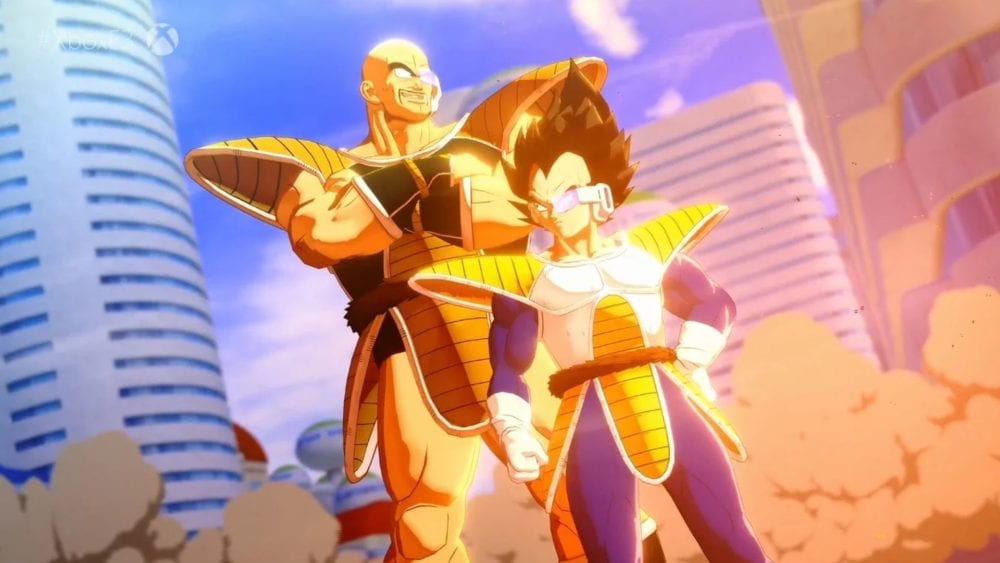 There are so many Dragon Ball games after all these years that you’d be forgiven for missing a few. There’s a prevailing problem in the series that so many of the games just feel too similar, but that looks like something fans won’t need to worry about for Dragon Ball Z Kakarot.

After going hands-on with the game at E3 2019, and interviewing the director, Kakarot feels surprisingly different from your typical Dragon Ball game, even while having all the necessary bits and bobs.

The reveal trailer during Microsoft’s conference laid the RPG terminology on thick, really emphasizing that this is a role-playing experience to make you feel like Goku. Our interview with the game’s director digs a little more into that, but our hands-on time was probably the most telling.

Right off the bat, Kakarot drops you into a massive open area to explore, but don’t get the wrong idea. Bandai Namco is very quick to clarify that Dragon Ball Z: Kakarot is not an open world game, and the development team doesn’t consider it as such.

The game is separated into “zones” that you can explore; think something like Dragon Age Inquisition. Our demo only let us roam around one zone, the classic green-hilled area that you see in countless Dragon Ball games, where Goku and Piccolo first fight Raditz.

Exploration is easily done, as Goku starts out on Flying Nimbus, letting you jet around whichever way you want. You can, however, just as easily fly on your own by simply double-tapping the A button on Xbox to jump and then fly.

The flight controls certainly feel a bit stiff right now, but it’s an absolute blast to boost around the world as Goku, and you can move at some seriously high speed. Stopping for a moment and looking around, you notice that quests take some inspiration from Breath of the Wild, in terms of how they’re displayed.

With only about 30 minutes to play, I had a hard time picking and choosing what I wanted to do, so I tried to dabble in a bit of everything.

I found some dinosaurs roaming the fields that I was able to kill with Ki blasts and take their meat, which I could then eat later on. I landed by a river and had Goku fish by sticking a tail on and dropping it in the water. I randomly stumbled upon Lunch standing next to a broken vehicle, and she gave me a quick tip.

Finally, I ran into Nam in a random village, and managed to pick up a side quest.

The main thing that impressed me is that this actually felt like a world to explore —one with interesting characters, fun little secrets, and inhabitants going about their life, both human and animal. Little details sprinkle the world, like cars driving down the road or villagers working.

Almost every Dragon Ball game has some kind of hub or home area that serves as a functional place to buy items, techniques, or go between game modes. However, very few, if any, of these have ever truly felt like an interesting place to explore.

I wanted to explore more of Kakarot’s world and see which new classic character I might meet again.

As you explore you run into enemies, like Red Ribbon robots, that’ll put you into a kind of RPG encounter. You switch to battle mode and take the enemy on with your party.

While these kind of “random encounters” are a neat twist, the actual battle system shares a lot in common with other Dragon Ball games, but it’s the fast-paced experience you’d expect.

You can launch into an auto combo with the B button and dodge around or dash with A. X launches Ki blasts while your special attacks are mapped on to the left bumper. Goku has a Ki gauge, which basically works like an MP gauge, governing all of his attacks, and you can recharge it by holding down Y.

It’s like a typical Dragon Ball fighting system, with a few more RPG elements sprinkled in. Of course, Goku has a lot of stats to manage which can definitely affect combat.

My demo ended with a climactic fight against Raditz, who had a whopping 20 health bars to whittle through. The game decided to drop a nice little nostalgia bomb too by playing “Chala Head Chala” during the whole battle.

This battle is where things got shaken up a bit, as at certain points Raditz would launch huge attacks that I’d have to dodge or block in specific ways, almost like dodging the massive attacks in from bosses in a Star Fox game.

While everything felt silky smooth, even with crazy particle effects on screen, there were quite a few moments that the camera proved to be incredibly troublesome, zooming right in on Goku’s head and making it near impossible to see the battle.

Considering this is an early build, of course, there’s bound to be issues that pop up.

Don’t get me wrong about Kakarot, the main story that we’re seeing is the exact same thing we’ve seen time and again, at least what I’ve experience is. However, the gameplay packed around all that is something that feels entirely new for Dragon Ball, and I’m excited by the potential of the little stories that can crop up with forgotten characters, like Eighter and Lunch.

We’ve still got a long way to go to see if Kakarot really manages to stay so different, but after playing countless Dragon Ball games I’m initially surprised by how much I want to jump in and explore Kakarot’s world. Hopefully, I still feel that way when it launches next year.