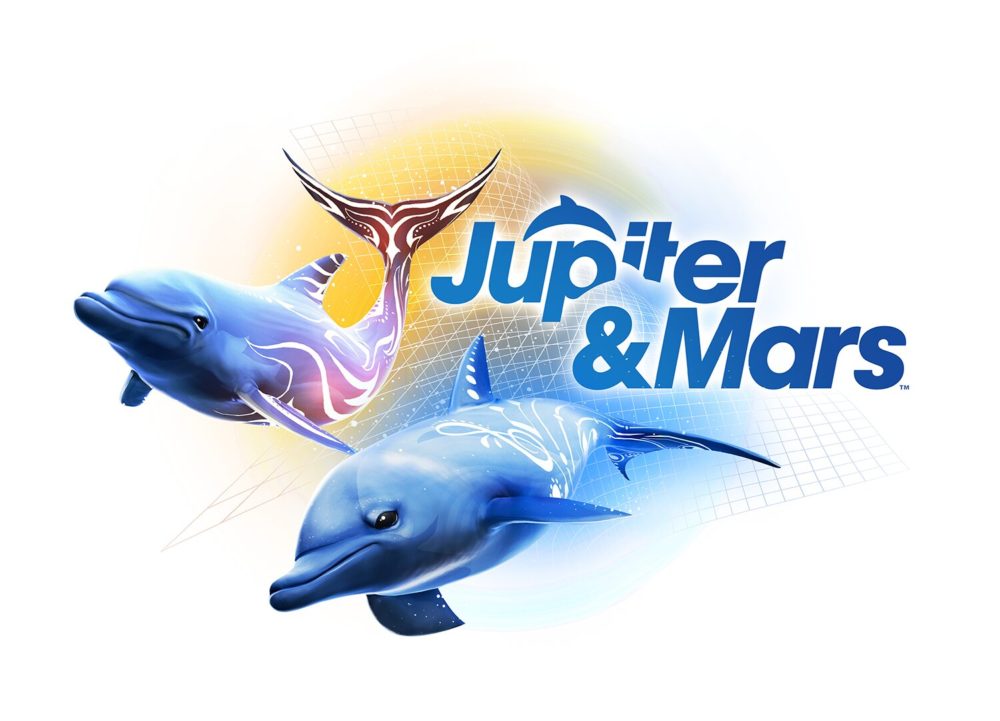 Launching on Earth Day, Jupiter & Mars has a clear message. We (or ‘Earthwalkers’ as we’re referred to in-game) are destroying the oceans. Bottles float around the world and discarded netting creates various paths and obstacles, pointing out how our excessive plastic use is endangering the wildlife.

In Jupiter & Mars’ world, humans have traveled to a far away world to escape the damage they have caused as the oceans begin to take over the cities.

The story of the titular dolphins is also focused more on their attempts to end the lingering threat than it is about the love story it is initially presented as.

The game is a little too wrapped up in its message, no matter how vital a message it is, because it’s little more than a boring adventure through underwhelming settings that doesn’t take advantage of immersion virtual reality brings.

You play as Jupiter, one of the two dolphins that the game focuses on, and you travel through the five different named settings that make up the levels. You’re there to shut down a space station in each one that is making the underwater world dangerous and harming the creatures that live there.

It’s all quite plodding, with you drifting through the levels, interacting with objects and trying to reach the next section. You can press R1 to send Mars to break rocks, send out an echo-location wave to reveal what’s ahead or send out a circular wave to save tangled wildlife or push dangerous jellyfish away.

There’s very little variety to any of it though, and none of it is particularly engaging. The jellyfish enemies crop up just a few times in each level and all you have to do is blast them with one press of square and idly swim past.

The only interesting gameplay comes from interactions with beacons that send out a wave of energy that you cannot touch. It turns parts of the game into stealth sections of some sort.

Walls and stones block the wave, so you have to analyze the beacon’s pattern and sneak between safe spots when the waves pause for a moment. The idea is then to get to and destroy the beacon’s generator so that the area is safe.

At times, these moments also turn into basic environmental puzzles. You sneak past beacons and down short tunnels to open a gate of some kind that allows you to reach the next area. They don’t vary at all, and there’s only a few that require any thought in the three-hour run time.

There’s also one new power in each level, such as the ability to swim against currents or enter ice areas, but it seems to be a way to artificially add a path than introduce a useful a new power at all. There’s little visual difference between the starting location and those that are blocked off.

The powers also attempt to add replayability. By the third area, a way to travel back to previous ones is introduced, allowing you to go back and save wildlife you couldn’t previously reach or find collectibles you may have missed.

The collectibles add nothing to the game, though. You crack open a shell with Mars’ attack, a symbol appears on the screen, and you continue swimming. There are loads to collect, but none of them link to gameplay in any way and trying to get them isn’t fun enough for it to be worthwhile.

Similar games like Abzu or Flower enhance basic gameplay with stunning visuals, which give you something to engage with in the slower moments. Jupiter & Mars’ visuals are lifeless, though, which is especially disappointing in VR. Don’t be deceived by pretty screenshots, the moments of beauty are fleeting at best.

All five of the locations are dark and empty. You’re surrounded by walls of stone, some neon foliage, and the structures that hint to a world left behind by humans. The life of the ocean is absent. You’d expect a game about the wonderment of the ocean to surround you with schools of fish and celebrate the scale of its setting.

Instead, you spend all the time drifting though bland worlds with just a few larger creatures to look at and your dolphin mate by your side.

It not just the limitations of PlayStation VR that cause this. Even playing on a TV, Jupiter & Mars’ world feels empty. Combining a lifeless world with dull gameplay creates something that’s a chore to play through.

There are a few other specific visuals elements that are off-putting too, most of which stem from the art style. Tigertron is founded by a developer who worked on Child of Eden, and the style is a similar mix of angular animations and neon colors.

When you send out an echolocation wave in their new game, it outlines all the individual parts of the world, even where the terrain level changes. It adds a strange artificial look to the world. You can’t avoid using the feature though since it’s needed to make Mars lock onto objects and the world is too dark to navigate without it.

There’s also a big circle in front of your face that acts as a reticle of sorts for your energy wave and a subtle waypoint indication, and it’s really distracting. It’s difficult to look past it as you gaze at the world, removing any immersion that the game’s trying to create.

The most striking part of the game is the main menu. The sea around you is bright and blue and groups of fish shuffle around you. Simply exploring could have been a much better experience if more of the actual game was like its menu.

I would recommend playing Jupiter & Mars in VR over a standard set-up. That’s not because of any increased immersion, but it’s better from a control perspective.

There are three options for comfort. The best for minimizing motion sickness is one that mimics how dolphins swim, seeing you turn by tilting your head. It feels good playing like this, with movement being very smooth and natural. However, I preferred the standard 45-degree snap turn option.

Jupiter & Mars will see you retreading your steps quite often and you’ll likely fail the stealth sections a few times, so being able to turn quickly and swim away makes failing and getting lost a bit more manageable.

While playing with smooth stick or head tilt movement, I occasionally got stuck on rocks due to my turning circle being wider that way, having to awkwardly reverse and swim away.

Tigertron recommends that you play Jupiter & Mars with a pair of headphones on and it’s easy to see why. The game’s music is its highlight, as you’d expect from minds behind Child of Eden.

From serene pianos that play as you’re told of Jupiter and Mars’ connection to dramatic pumping beats as the stakes rise in the final scenes, it’s fantastic. It’s just a shame that it’s not matched elsewhere.

Jupiter & Mars may only be a few hours long but it feels like a drag. Its message is admirable but swimming through its empty world is tedious. The basic stealth sections, block smashing mechanics, and environmental puzzles simply aren’t a lot of fun and the visuals are too lifeless to make it a world still worth visiting.