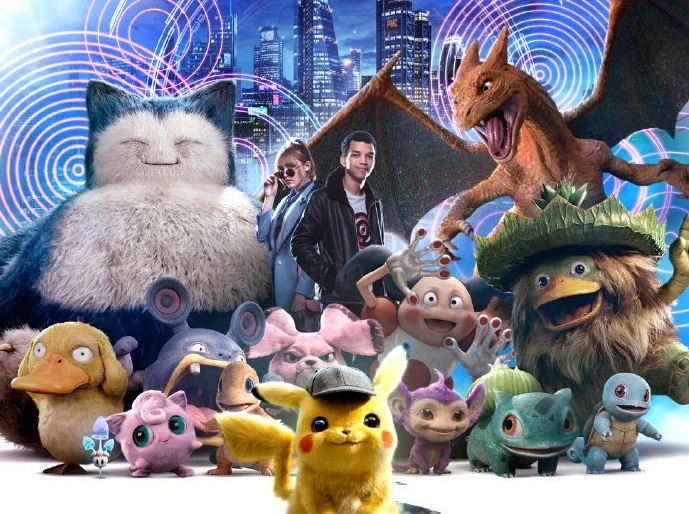 The dedicated people at Serebii.net have announced Detective Pikachu will release in China, and they also revealed the movie poster that will greet Chinese moviegoers. To be honest, I’m digging China’s poster more than the American ones.

Most audiences’ first experience with a Detective Pikachu movie poster was probably a picture of a tiny Detective Pikachu surrounded by the neon signs of Ryme City. There’s nothing inherently wrong with this poster, as the Detective Pikachu movie is basically a film noir where the role of the hardboiled detective is played by an electric rodent (voiced by Ryan Reynolds), and this poster sells that concept wonderfully. More importantly, the poster is packed with detail, and every time you examine it, odds are you find a new Easter egg that escaped your gaze previously.

Western audiences also received a second movie poster that features Detective Pikachu and Tim Goodman (played by Justice Smith) standing on top of an apartment building, looking down on Ryme City. The poster doesn’t have as much a noir film feel as the first one, but it includes a few Pokemon wandering around the roof and apartment’s rooms as if they were actual wild animals and pets, which wins some worldbuilding points.

However, the Chinese poster is just the best of the three. Ryme City is displayed in the distance, and the poster uses negative space and a road shaped like a lightning bolt to draw the viewer’s attention towards the main draw of the movie: Detective Pikachu himself and all the other Pokemon in their semi-realistic glory. Call it a hunch, but I’m willing to bet the Pokemon are front and center in the Chinese poster because most audiences probably want to watch a Detective Pikachu movie for the Pokemon.

Moreover, Tim Goodman and Lucy Stevens (played by Kathryn Newton) are in the poster and surrounded by the Pokemon. They’re important characters in the movie but don’t feature prominently in the American posters, which is another point in favor of the Chinese movie poster.

The Chinese poster also stands above the American posters thanks to an Easter egg that will be obvious to longtime Poke Fans: many of the Pokemon in the poster recreate their official artwork poses. Jigglypuff cocks her head/body to the side and looks at something to her side (in this case a Morelull); Psyduck stands on one flipper, holds his head with his hands, and looks into the distance with a thousand-yard stare; and Loudred pumps his fists in the air, hops on one foot, and bellows. Not every Pokemon in the poster is a one-to-one translation of their artwork —I’m looking at you, Ludicolo, Charizard, and Aipom— but the poses are a nice touch that makes me feel like a kid again. I can’t say the same for the American movie posters.