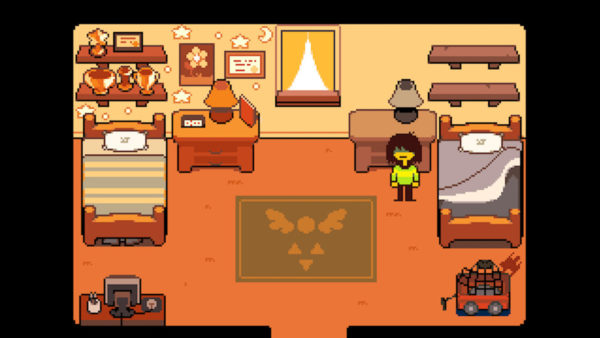 [Endless Playlist is a series of monthly articles where we pick a video game soundtrack for discussion, try to provide a critical analysis of how it performs within the game it’s from, and decide how it holds up on its own. This month, we’re breaking down Deltarune’s soundtrack.]

Undertale was widely regarded as an excellent game for a variety of reasons, with its soundtrack being one of the major highlights. And yet, curiously enough, I’d always found Undertale’s soundtrack to be a bit of a headache to listen to. Don’t get me wrong; Undertale’s soundtracks feature some of my favorite musical pieces of all time, but the collection itself is a mess.

Deltarune’s soundtrack leaves me feeling disoriented in the same way.

Let’s get the big hitters out of the way. Unlike Undertale, Deltarune isn’t exactly a complete game just yet, and thus it hasn’t had enough time to develop and flesh out its characters fully. The same goes for its music, but there are already recurrent themes that have begun to dig their way into my brain.

Right from the get-go, it’s obvious that Field of Hope and Dreams is all set to take on the coveted role of Main Theme (TM) in Deltarune. Just like Undertale was to, um, Undertale, Field is the glue that holds Deltarune’s soundtrack together. Whenever you’re introduced to a new theme, chances are high that you’ll hear that recurring Field motif in there in some way, shape, or form.

Because of that, it was extremely important that game creator and composer Toby Fox got that theme just right. If you listen closely, Field of Hope and Dreams kind of hits the same beats that Undertale did.

There’s no dramatic acoustic guitar build-up; instead, it starts with a fast-paced electronic piano phrase before the percussion and classical piano kicks in, and that’s where you get the first hint of the main melody.

Like with most of Undertale’s popular tracks, Field of Hopes and Dreams excels at being so memorable because of how simple it is. The main melody loops on itself, consisting only of a handful of notes that repeat over each other. Field has a totally different melody from Undertale (the track), and yet it captures that same ‘feel’ because of how simple the music is and how few chords Fox is using to create this track.

That, to me, is what elevates Undertale’s best music to a whole other level, and Fox has successfully replicated those efforts with Field of Hopes and Dreams. Simplicity is key here, even when the track is backed up with frenetic notes and a much more intense beat.

Just as was the case with Undertale, the rest of Deltarune’s soundtrack references Field constantly and uses it as an anchor point. Scarlet Forest is yet another exploration theme that starts off rather tentatively before weaving in that main phrase. You can hear hints of this track in Friendship as well, where we’re treated to a more traditional chiptune variant of the piece to tie the story up nicely.

New to Deltarune and the Undertale universe is the introduction of a lyrical performance in the soundtrack. Performed by Laura Shigahara, Don’t Forget is essentially a short vocal version of Field, complete with simple lyrics to summarize the vibe of the story.

Outside of that, Fox certainly makes sure to include obvious callbacks to Undertale. You Can Always Come Home is an obvious one —Home served as the home track that would play in Toriel’s house, and it was a pure acoustic version of Undertale’s main theme.

You Can Always Come Home is virtually the same track, but with added layers and instruments, and of course, a short phrase to call back to Field of Hope and Dreams yet again. Even Card Castle‘s intro contains an ominous throwback to Asgore’s theme from Undertale, but slowly gives way to something a little different. From a story and gameplay perspective, if Deltarune is meant to showcase a universe parallel to the one in Undertale, then Fox has done a great job with conveying that sentiment through his music.

Deltarune’s best tracks are distinct, yet subtly familiar in their simplicity to help make that connection between both games.

With Deltarune, Fox has also done more interesting and experimental things with the music, particularly with Susie’s track. Susie is a short piece made up almost entirely of a sad electric guitar playing a mournful, wistful phrase.

Vs. Susie expands on that tune even further with more guitars, creating a much darker undertone than anything we’ve heard in Undertale. While the original game never shied away from heavy topics like depression and suicide, Deltarune looks to get more in-depth with those themes. Vs. Susie is perhaps one of the most tragic-sounding pieces in this collection, and might even be better than most of the character tracks we heard in Undertale.

And yet, despite the flashes of musical brilliance we’ve gotten in Deltarune, it’s such a small part of the entire collection of 40 tracks. Despite being only 40 minutes long in runtime, the soundtrack feels like it stretches on for hours because of how much filler there is in here.

When you put aside the gems like Field and Vs. Susie —and if you’re not counting variants of those tracks— you’re left with some seriously strange tracks that don’t feel like they really fit in anywhere.

Take April 2012, for instance, which is basically just a smattering of sounds put together to form some sort of rhythm. It’s almost a cacophony. Or Hip Shop, which is actually a rather melodically pleasing track on its own, but doesn’t fit in the collection at all because of how radically different it sounds compared to the game’s main motifs. I suspect it’s largely due to the variety of instruments employed for the creation of the music; without a lead instrument, or a consistent instrumental signature of some sort, parts of the soundtrack start to feel like they’re at odds with each other.

Undertale suffered from a similar problem, where there were too many filler tracks that didn’t feel like they belonged in a game like this. Despite having very strong melodies and themes to punctuate the story beats when necessary, Deltarune’s soundtrack often feels aimless when you’re listening to it in an isolated experience.

Of course, some of these outlier tracks do work well within the game. After all, Deltarune is a quirky game where many quirky things happen, and you certainly need the appropriate music to back it up. But as a musical collection, it’s all over the place and is almost painful to listen to in a single sitting.

That’s where Undertale, and subsequently Deltarune, leaves me conflicted. Ironically enough, the games have clear messages, with a set path (or paths) that its creator has deliberately prepared for the player to follow. Thematically, the games have strong stories and sentiments that are supported by the music when the need arises. But when you take a step back and really examine Deltarune’s soundtrack, it can be surprising to see how discordant or disjointed it really is.

By and large, Deltarune still looks like it’s going to be quite the worthy follow-up to Undertale. It’s a pity that the soundtrack seems doomed to follow in the footsteps of its predecessor as well: brilliant in flashes, and a wrecked mess everywhere else.