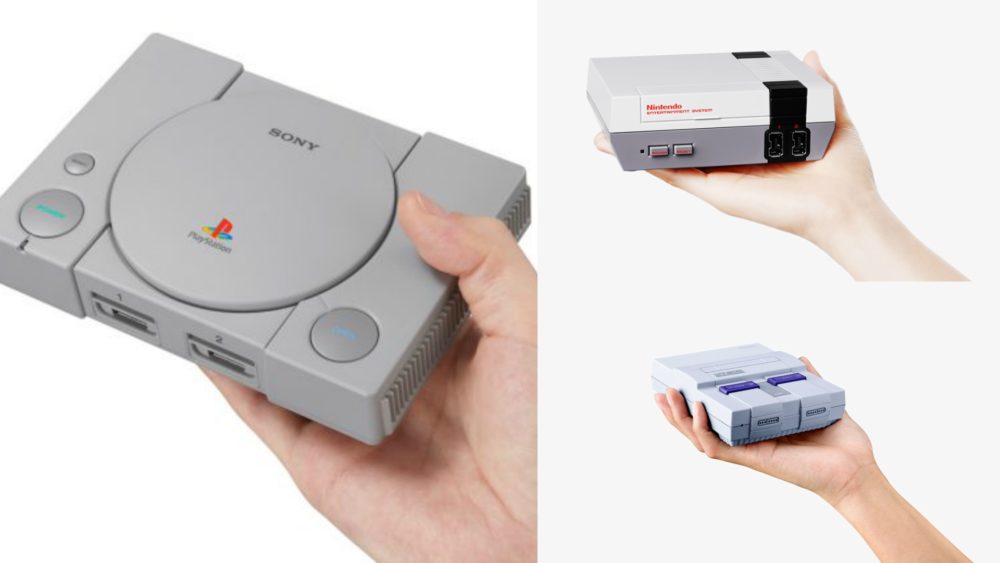 The buzz surrounding Nintendo’s NES Classic and its subsequently astonishing commercial performance was so profound that it’s likely to have spawned a whole new sub-category of consoles. We’ve already had the SNES follow-up before copycats SEGA and Sony recently made their own versions public. Now we have rumors of an N64 Classic… what’s next?

Consumers are lapping up what is essentially a fad product line, and manufacturers such as Nintendo and Sony are only too happy to oblige. But what is it about the prospect of playing ancient games on miniature hardware that’s so appealing?

It’s not easy to explain, but I am certain the whole thing is going to end in tears.

When I consider classic consoles, I’m struck by a review I read years ago for Konami’s Metal Gear Solid Legacy Collection. It concluded that one should “never underestimate people’s desire to buy something they don’t really need.” I distinctly remember nodding my head in agreement before pressing the order button.

The Legacy Collection came in a very pretty package –a big white box with cool artwork inside, you know the one. I’ve never actually played any of the games it came with. I’d already played them once or twice before, and then again on the HD Collection I’d bought the year earlier.

The Legacy Collection has sat on my shelf staring at me for five years.

I imagine that’s much the same as the Classic Consoles that people are falling over themselves to purchase at the moment. Not for everyone, certainly, but the vast majority of consumers are spending their money on what boils down to an overpriced piece of plastic that looks lovely but has no real entertainment value.

And I get that, honestly. As a model enthusiast, I appreciate the aesthetic value of having a cutesy mini version of one’s favorite console sitting on a visible shelf. I can picture myself building a little collection of all the inevitable ones that’ll be marked in the future.

But actually playing the games on the hardware itself? I’m not so sure. I can’t honestly see myself spending 80 hours playing Wild Arms on the PS One Classic any time soon, or replaying Final Fantasy VII for the umpteenth time. No, there are far too many better, modern games to play.

In the end, these classic console products appeal purely and simply on their aesthetic merit –all for the cool price of $99.

I was actually waiting rather excitedly for Sony to drop the announcement of the PS One Classic, too. That was my first “proper” console (sorry, Master System, you don’t count), and one that really invokes a load of nostalgia.

But ironically, there’s a huge issue with its games line-up that threatens to spoil the whole thing, and even more ironically, it once again reminds of that damn Metal Gear Solid Legacy Collection.

Metal Gear Solid was the one game I actually wanted to play on my PS3. My original PS One had long since stopped working, and I rather fancied the idea of playing a version of the game upscaled to run cleanly on a modern television. But was it included? No, of course not. You got some sort of lame digital code or something that I never redeemed. Curse you, Konami.

The PS One Classic hasn’t yet announced its full game line-up. We’ve come up with our own list of must-includes here at Twinfinite, but I’m not holding my breath. There are just too many licensing issues.

It’s a nice idea, the thought of Sony execs sitting around a table spitballing a fantasy line-up of cool games to throw on the ultimate PlayStation, but that’s not how it works. It’s much more boring: lawyers in suits determine which games make the cut, I’m sure.

I can, therefore, see the rhetoric around the PS One Classic very quickly descending into a narrative that it’s overpriced and has an underwhelming library of games. Oh, and the controller doesn’t have analog, which sucks –actually, people are already complaining about that.

On the other hand, Nintendo’s N64 has enough first party games that it can probably muster a decent library of games. It’s just a rumor at this stage, but would it really surprise you to see it announced? Of course not, it’s practically a given. It would be far more shocking if Nintendo didn’t announce it.

That in itself is now starting to become an even bigger issue: it’s all become a bit clinical now, this whole affair. It’s now a product line rather than an adorable surprise; a carefully planned part of a wider business strategy, not a cute little one-off that would make for a special birthday present.

Maybe I’m being cynical, but I feel like the conversation is already changing from joyous excitement to murmurs of a cash grab. Are we really going to get a PS2 Classic, and then a Gamecube Classic, and then a Dreamcast Classic, and then every classic they can possibly think of until they’ve covered every angle and rinsed every possible nostalgic market? That’s business, I guess, but it doesn’t take much to see this all getting very tedious, and for public opinion to pull a complete 180.