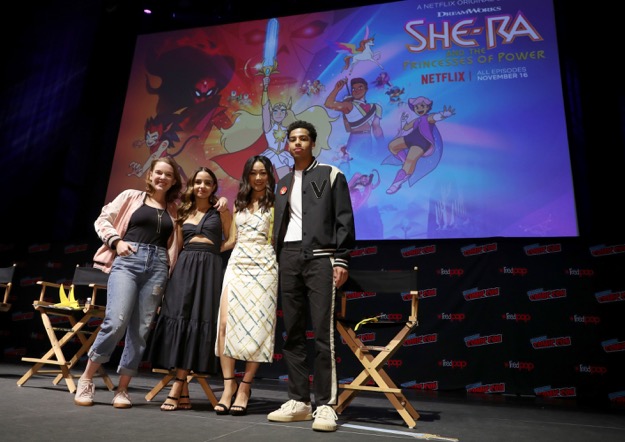 Earlier today, the She-Ra and the Princesses of Power panel at New York Comic Con revealed some juicy information. Turns out the showrunners are taking full advantage of Netflix’s syndicated structure and will tell stories the original She-Ra show never could.

Technically, that is only a half-truth. The show will still revolve around Adora, an “orphan” (i.e., she was kidnapped by the evil lord Hordak to serve as a commander in his army) who finds a magical sword that transforms her into She-Ra, the Princess of Power. She also allies herself with a bunch of rebel fighters. But, audiences can also expect quite a few changes to the story and characters, and I don’t just mean the hot pants She-Ra now wears under her skirt.

Because She-Ra and the Princesses of Power is essentially a syndicated show, the showrunners don’t have to worry about episodes being aired out of order. This lets the show’s characters develop, and the writers took full advantage of this with several new character dynamics. The most prevalent of these dynamics will be Adora’s relationship with her old army buddy Catra. After all, now that Adora’s no longer a part of Hordak’s Evil Horde (no affiliation with the Orcish Horde), what’s become of her old allies who still haven’ t wizened up to the fact that an evil dictator named Hordak is evil?

If the panel and the clips are any indication, Catra, for all her ambitions of commanding Hordak’s army, will try to bring Adora back over to the dark side. Likewise, Adora probably will try to win Catra over and make a heroine out of her. According to the new trailer, they’ve trained since childhood, which forged a friendly rivalry that transformed them into powerful combatants worthy of leading Hordak’s army. You just can’t throw away relationships like that.

However, Adora and Catra won’t be the only characters to hog the spotlight. She-Ra and the Princesses of Power will also focus on one of the titular princesses Glimmer and her kinda boyfriend Bow. Oh, and apparently another villain named Scorpia will be a major focus of the show since, despite her serving the Eternian equivalent of Emperor Palpatine, she still believes in stuff like the power of friendship. No, seriously. A character based on a scorpion, an animal noted for its solitary nature and feared for its poisonous sting, wants to be friends with people even when she’s helping conquer the world.

She-Ra and the Princesses of Power will air on Netflix November 16th.