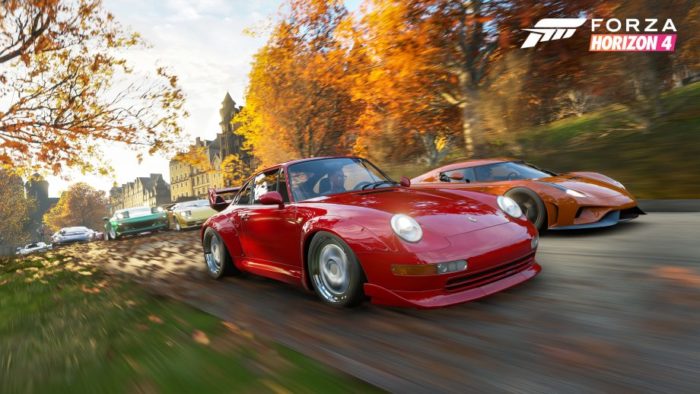 Forza Horizon 4 on Xbox One

Forza Horizon 4 puts everything together. It’s the most complete racing game that I have ever played, and there’s no stone left unturned here. It has a plenty of single-player content, races, and side activities to keep the offline fans happy. Playground Games doesn’t abandon those fans. On the flip side, there’s so much to explore, see and do with friends and strangers in the game’s remarkable shared world which will cycle through all four seasons weekly, offering new challenges, events and experiences as the colors change. Topping even the extremely impressive gameplay is the game’s jaw-droppingly beautiful visuals and audio, especially when played on Xbox One X.

Where do I start? The game’s most prominent feature is the seasonal gameplay which permeates throughout everything you do in Forza Horizon 4. The story mode (or closest thing to it) takes place in one full year in a village and its surrounding areas in Britain. This is designed to give you a taste of each season before the game thrusts you into the shared world which will rotate seasons on a timer. Everyone in your up to 72-person lobby sees whatever you’re seeing, and together with the change of seasons and events, will create the feeling that world of Horizon is very much alive.

The change of seasons allows Forza Horizon 4 to flex its technical chops. Forza Horizon 4 on the Xbox One X is one of the most gorgeous games I’ve ever played. On my Xbox One X enhanced games, I usually opt for the performance mode of 60 FPS, but Forza Horizon 4 runs great at 30 FPS, and looks next-gen when played in 4K/HDR. It’s the game will make you feel like your 4K TV and Xbox One X was worth the investment. I’m never “that guy” that uses or cares about Photo Modes in games, but there were certain moments that I just could not resist snapping a photo.

The seasons are beautiful. The sun shines extra bright against the harsh white snow of winter, while in summer, fields of lovely flowers are in full bloom and are begging to be driven through. The ambient noises for each season are perfect, and all players should do themselves a favor and just turn the radio off for a while and just listen. Leaves crinkle in just the right way and the howl of the winter winds whipping the snow around is haunting.

Every season is not only a feast for the eyes in their own unique way, but offer gameplay challenges as well. Approaching a track with heavy snow is different than driving on slick asphalt during rain, or going off-road. This variety layers on top of the game’s different race types which include unsanctioned street racing, cross country tracks, drag strips, dirt racing, traditional track racing, and even starring in a stunt movie as well. There’s a ton of race course variety here.

On top of that is the fact that you can almost always set up your own parameters for all the in-game races. Meaning, even if a track defaults to having you use, let’s say the Supercar class of vehicles, you can change the “Blueprint” as they are called, to be basically whatever you want and still get all the same credit for completing it. Put low-end muscle cars in a snow race, or just have it be a free for all where all the racers use whatever car they want. Players are free to use their favorite cars in whatever race type they want, and are rarely ever forced to do something they don’t want to.

To meet all those challenges, Forza Horizon 4 affords you a wealth of tuning and customization options at your disposal if you’re the type of player that wants to get serious. You can fine tune your car exactly the way that you want it, and get creative with paint jobs that you can share with others online, which is great for people like me with zero creativity skills but are eager to take advantage of the wonderful people willing to put the effort into uploading something awesome looking.

All of that reminds me about another thing that’s great about Forza Horizon 4. You’re free to be as casual or hardcore as you want, and both player types will still have fun. You don’t need to get crazy about upgrading your car; in fact, the game has a quick upgrade feature that will give you the basic parts you need to get the most out of your vehicle. There’s a smart difficulty included as well that will keep track of how you’re doing, and offer to change the difficulty based on how you’re doing.

You can get influence and credits from grinding races, sure, but you can also level up and earn credits through exploring, and completing open-world challenges too. And, because the game is arcade-style, the gameplay is also extremely accessible and easy for casual fans to pick up and play versus the AI for fun and mess around online, but when ranked play kicks off, more competitive players will have plenty of human competition that will challenge them to take the game more seriously by learning courses, and selecting/tuning cars that give them the best chance to succeed.

It’s because of all this that Forza Horizon 4 is set up to appeal to anyone that even has a remote interest in racing games.

While Forza Horizon 4 can be played 100% offline, the game has excellent multiplayer features too, including more organized play that shouldn’t be ignored. The backbone of Forza Horizon 4’s multiplayer are the adventures that feature a mix of both races (track and free roam), and games such as zombie Survival and King (a keep away kind of game). You can jump into both unranked, and ranked adventures which feature each or all of these types of games, or create your own private lobbies that allow you to create your own playlist of races and games. And, although the game’s seasons rotate, you can use whatever seasons you want when setting up your own adventures. There’s also seasonal challenges and events as well that should keep the open-world fresh.

Really the only blemish, if there is one, is that there’s nothing particularly special about Forza Horizon 4’s gameplay. There’s nothing wrong with it either. It’s very safe and familiar, but still solid. Just don’t go in expecting your world view on arcade racing to suddenly change.

The AI will start to get predictable after a while, and will rarely do anything that shocks you. If you’re playing predominately against the computer, you’ll need to eventually up the difficulty to keep it from getting too stale, but that will eventually reach a point where things to start to feel unfair. It’s best to try to find a sweet spot where you win a lot of the time, podium sometimes, and occasionally drop out of the top 3.

Also, some of the game’s “story” events such as the showcase events, feel almost scripted where almost nothing matters until the last few moments. Racing against a train or a giant hovercraft is exciting, sure, but it can be frustrating when the whole race (assuming you’re trying of course) just boils down to whether you hit the last turn right.

There’s so much more in Forza Horizon 4 that I didn’t have space to touch on such as player housing, #Forzathon, discoverable beauty points, character customization, plans for Route Creator, and more. It’s hard to imagine an arcade racer this generation playing and looking much better than Forza Horizon 4. Unless you don’t like racing games, or only appreciate hyper-realism, there’s no other reason that Xbox One and Windows owners should pass this game up. It’s by far the best Xbox One exclusive for 2018, and among the best games this year, period. Based on how Horizon 4 turned out, there’s no reason to believe that the Forza series in general won’t continue to be the bar that other racing games seek to clear.

Forza Horizon 4 launches for Xbox One on Oct. 2, and will be made available to Game Pass holders on the same day as well.