There’s no disputing that despite having been around for over 20 years now, Pokemon is still a formidable force within the video games industry. Just take a moment to remember how Pokemon GO took over millions upon millions of lives when it released on mobile devices back in 2016. Well, Nintendo is setting up to release another new Pokemon game later this year, this time for the Nintendo Switch. And while many fans will likely already be counting down the days until they can see Pikachu and co. on their big screen (or small Switch display), we’ve got an inkling people are going to miss who Pokemon Let’s GO is really for.

As the title suggests, Pokemon Let’s GO Eevee & Pikachu are embracing what made Pokemon GO such a unique experience. Rather than battling your way across the Kanto region as players did all those years ago in Red, Blue, and Yellow, players will have to go about catching Pokemon in a non-aggressive manner. Sure, you can trade and battle Pokemon with others online, but the campaign is going to blend the typical Pokemon adventure with some more casual features and tweaks in order to cater to the Pokemon GO audience. Compulsory motion controls for catching Pokemon, for example.

That’s not to say we think Pokemon Let’s GO Eevee & Pikachu are necessarily going to be bad games, but instead that many fans will be hoping that this year’s Pokemon titles on Switch will bring a classic Pokemon RPG adventure in line with the likes of Ultra Sun and Moon. 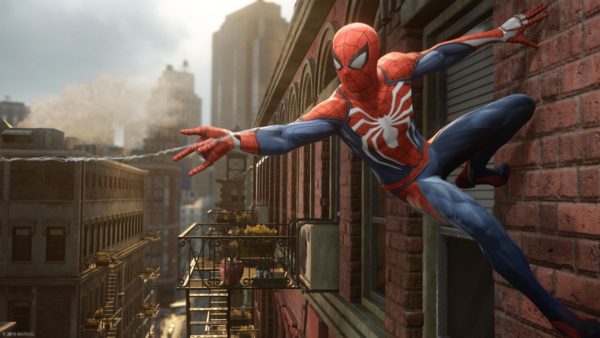 While we’re on the topic of things that are incredibly hot and popular right now, it’s probably a good idea to talk about superheroes. Not only have we seen Marvel continue its dominance with its cinematic universe of the past decade or so, but we’ve seen also seen the rise of superheroes within video games, too.

The Batman Arkham series proved that gritty superhero games were definitely a viable direction to head in, while Epic Games’ Fortnite and Infinity War crossover event earlier this year showed that even the villainous Thanos can take some time out from wiping out half of the universe to bag a victory royale.

And so, the timing of Insomniac Games’ Spider-Man’s release almost seems perfect. Kickstarting the peak video game months in 2018, Spider-Man will see players swinging around the streets of Manhattan, kicking ass and taking names, while they make their way through an entirely new Spider-Man story.

That’s definitely something that’s got us excited, and the fact that it’s Insomniac’s first licensed game is equally as exciting, too. However, we can’t help but have reservations on just how long Spider-Man is going to stay fun for. Though many of the trailers we’ve seen have shown Spidey effortlessly gliding through the streets, seamlessly taking down three bad guys before jumping out a window and continuing on his merry way, it’s not exactly clear just how much of that is within your control, and how much of it simply comes down to executing QTEs.

Plus, it doesn’t exactly look like it’s really innovating the open world genre. In between main missions, you’ve got a small assortment of different side quest mission types to take on, collectibles, and a few other points of interest to check out. It’s all just things we’ve already done before, but with a Spider-Man skin pasted over the top.

Will it look great? Absolutely. Will it be terrible? Probably not. But will some players feel like the whole thing was a little overhyped once the credits roll? We’d put our money on it.

There’s a big change coming in the Call of Duty series this year. The single-player campaign has been abandoned in favor of a trio of multiplayer modes. The classic multiplayer mode offers the much-desired boots-on-the-ground buzzword *ahem* I mean combat that fans have been clamoring for since the disappointingly floaty Infinity War, while zombies provides intense, team-based, high-score chasing fun, and Blackout takes a stab at the battle royale genre.

It’s a bold move, but one that Activision clearly has the figures to back up doing. However, we can’t help but think that Black Ops 4 isn’t quite going to be the definitive Call of Duty package just yet, especially after our experience with the beta.

Of course, things can change in the months between the beta and Black Ops 4’s official release, but the introduction of Body Armor, which significantly increases the health/protection of whoever has it equipped, makes the classic multiplayer mode feel… oddly not very Call of Duty. It’s something Treyarch has already announced it’s nerfing, but whether it’ll be enough to resolve it’s dominance in the beta remains to be seen. Other players complained of poor spawns, and for those more casual players who haven’t been keeping up with the changes in the latest installment, the shift from automatically regenerating health to a manual system makes for a more complex and a slightly jarring experience coming from past games.

Similarly, we’re sure that developer Treyarch has a couple aces up its sleeve for its Blackout battle royale mode, but when it’s over a year late to the party, will it have the sticking power that the likes of Fortnite and PUBG have, and in the case of PUBG, are struggling to maintain? Only time will tell, but we’re not convinced that even with Call of Duty being a monolith series that it has enough to knock Fortnite off the battle royale throne. Considering how long Call of Duty has bossed the shooter genre for, that could be a bitter pill to swallow for loyal fans.

If there’s one game that year we’re pretty confident is going to be overhyped and leave some fans disappointed, it’d be Fallout 76 every day of the week. As much as it pains us to say it, Fallout 76 simply isn’t going to be the game that many knowingly or unknowingly hope that it’s going to be.

For the casual masses that spot a Fallout commercial on TV, they may not realize that this is a multiplayer-focused wasteland wandering experience. You’re there to help or hinder other players, as they are for you. Fallout 76 will still have all of the charm and many core features that make the series what it is, but ultimately, we can’t help but feel your entire enjoyment of the game will be determined by those who inhabit the wasteland with you.

Got some ass who won’t leave you alone? Sure, that bounty might make them a target for others, but if they don’t care, or don’t want to run the risk of also being killed, you could just be someone’s target practice for a few hours, while you helplessly try and continue with completing a quest. Sure, Bethesda has claimed that this won’t be allowed, but when it doesn’t explicitly mention how it’ll prevent this from happening, we can’t help but feel a little skeptical.

Even if this turns out to be a non-issue, the shift from strictly single-player to shared world could be a wrong step for many fans who enjoy having a sandbox wasteland all to themselves. Of course, as is the case with all of the games on this list, we’ll just have to wait and see what happens when Fallout 76 finally releases.