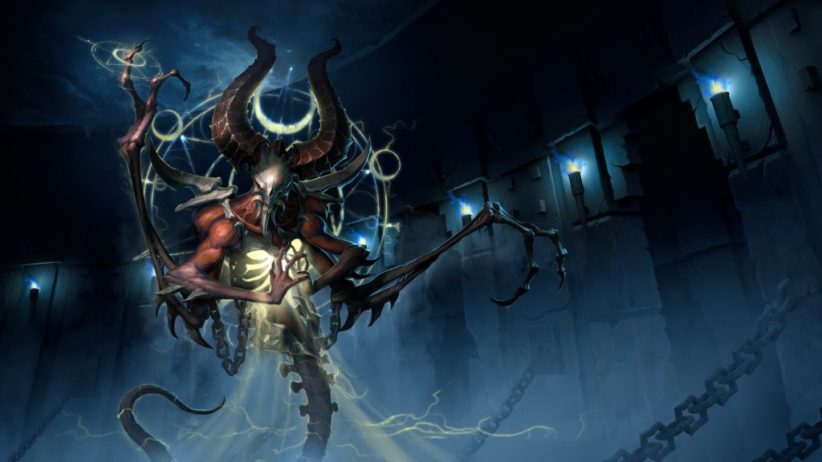 Blizzard has detailed the full range of abilities for Mephisto, the newest ranged addition to its MOBA Heroes of the Storm.

Mephisto was a major character in Diablo 2. Similarly to how he behaved in that game, his HotS iteration specialises in ranged combat and high sustained damage. His Trait, named Lord of Hatred, seems incredibly powerful, allowing him to reduce the cooldown of his Basic Abilities by attacking enemies.

His Basic Abilities include Skull Missile, which conjures a skull in the target’s direction to deal 127 points of damage as well as a 25% slow for 2 seconds.

His second ability, Lightning Nova, conjures a ring of lightning around Mephisto for 2.5 seconds, dealing 48 damage per 0.25 seconds. Each time this Nova hits a hero, it deals an extra 4% of damage up to 40%.

Mephisto’s final Basic Ability, Shade of Mephisto, allows for an impressive amount of mobility, allowing him to teleport to a target’s location, dealing 78 points of damage. This ability leaves behind a shade in Mephisto’s original location, which he returns to once its 2.5 second cast time is over.

His Heroic Abilities, Consume Souls and Durance of Hate, follows a similar path to his other attacks, combining high sustained damage with slows.

On paper, Mephisto appears to personify the concept of a glass cannon. Much like other mage classes in the genre, he is able to demonstrate impressive damage potential, with his slows being the largest appeal to HotS veterans.

His weaknesses, as demonstrated in Blizzard’s Spotlight video below, includes his lack of crowd control and burst damage.