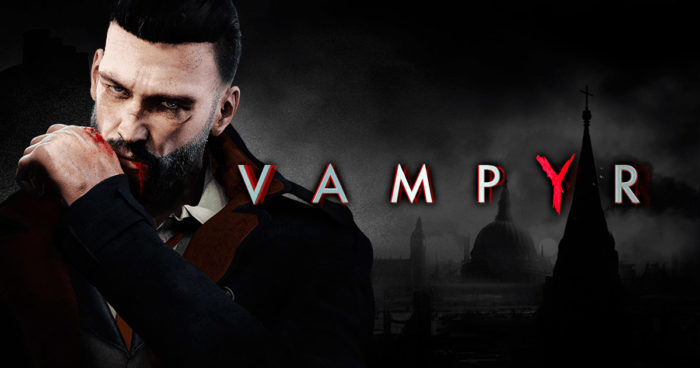 Vampyr is a marked departure from Dontnod Entertainment’s most recent enterprise, the acclaimed Life is Strange series. Tonally a complete polar opposite, and featuring gameplay mechanics within an RPG design, putting aside the story-driven adventure genre that’s brought them such universal praise was an unexpected and somewhat risky move. Particularly so, given that their only previous venture, a third-person action game titled Remember Me, wasn’t all that well received.

Apart from uncertainty, though, what’s so exciting about Vampyr is the notion that it’s the culmination of these two projects coming together as one potentially brilliant action-RPG experience.

Vampyr boasts the brooding atmosphere and tight combat of Remember Me, and incorporates the same sort of branching narrative that shifts and molds according to player actions just as in Life is Strange. It’s innovative stuff and more than little ambitious. Yet there’s no question that it does come together very well indeed, and after my twenty-hour playthrough, I can say it’s one of my favorite gaming experiences of 2018, so far.

Vampyr’s main protagonist, Dr. Jonathan Reid, is a walking paradox. Once a devoted healer of men, he’s now compelled to prey upon them as a newly born ‘Ekon’ (vampire). Having just returned to London from life on the front lines of WW1, he finds the city ravished by the Spanish Flu epidemic and is recruited by a fellow colleague of a local hospital to combat the disease.

Yet he thirsts for human blood, and much of the game’s story explores his inner struggle to fulfill this lust as well as his commitment to science and health. Reid embarks on a quest both to discover the origins of the ‘maker’ who turned him into his new undead self, as well as establish the cause of what is turning Skals (lesser vampires) into violent and unpredictable monsters.

However, that condensed synopsis of the main story arc doesn’t do justice to just how deep the narrative really goes here. Outside of Vampyr’s main story are dozens of NPCs spread across four of the city’s different boroughs, and each of them has entire quest lines and backstories to explore. There are often side quests and investigations that lead to other interactions, with NPCs linked by ‘social connections’ that tie them together. In some cases, those stories are woven into the outcome of the main story arc, too. And depending on player decisions, their stories frequently impact the dynamic of the city borough in which they live as well.

Here’s where things get really interesting, though: the various plotlines, relationships, and situations within each borough won’t just be decided by binary dialogue choices, they’re also decided on whether you chose to nurture a relationship or feed on that NPC. Every major character in Vampyr can be bitten, killed, and harvested for blood XP, which in turn is used to upgrade Dr. Reid’s abilities and make him stronger.

Unlike other action-RPGs, you won’t really garner any substantial XP in combat. Rather, you’ll need to make calculated choices about who you feed on, and who you spare to make any decent headway on turning Reid into a more experienced and powerful vampire. XP is poured into supernatural abilities when resting at one of Reid’s special hideouts, but doing so advances time one evening, putting into motion the consequences of your decisions.

Playing Reid as a pacifist in Vampyr makes combat much harder, but going too far the other way can see whole boroughs descend into chaos. You keep tabs on this by an inventory menu that reports the status of each borough in descending levels, from healthy to critical, and the condition of each NPC, as well as the social circles that link them all together. In a final twist that ties back to Reid’s profession as a doctor, London’s NPCs all sporadically suffer from illnesses that you’ll need to craft treatments to heal. Doing so increases their blood quality and contributes to improving the overall health of the borough. Healthy citizens also yield more experience, too, if you’ve decided to go down that bloodthirsty path…

The way that Vampyr’s branching narrative works in tandem with this system presents a fascinating strategic conundrum to players throughout the game. I found myself constantly questioning the morality of my decisions because I wanted London’s boroughs to recover, but I couldn’t help but be intrigued by the prospect of becoming an even more powerful vampire. And the pressure of making the right call was compounded by some admittedly poor decisions that I made which saw a whole borough become totally hostile, its entire population wiped out, and characters I was genuinely interested in vanish.

Many RPGs promise a branching narrative that tangibly impacts the story and game environment, but I can’t think of many that so boldly machine-guns entire sections of the story. That makes for a tense, high stakes experience that had me engaged throughout.

But Vampyr isn’t just a story-driven adventure game, it’s an action-RPG. So how does this experience writing clever narrative translate to a design that focuses on combat and traversal?

It’s worth noting that Dontnod Entertainment is no stranger to fluid, fast-paced combat. That was one of Remember Me’s most accomplished features, after all. Here, things aren’t quite so arcade-like, though. Without comparing every RPG with a dodge mechanic and a stamina bar to Dark Souls, Vampyr is very clearly inspired by that very influential franchise. Enemies all cause pretty hefty damage and have attack patterns to memorize, and you’ll have to rely on timing and measuring your strikes to effectively overcome them. It’s watered down in comparison to Dark Souls, of course, and not nearly as precise, but the similarities are undeniable.

For the most part, I found combat thoroughly satisfying. Switching between single and dual-wielding weapons, knocking enemies down to bite them, and then using the harvested blood to perform special vampire abilities was a fun loop that made me want to engage with enemies even though the XP reward is absolutely minimal.

That said, the rhythm of combat doesn’t really hit its groove until I’d built my stamina up. Also, encounters seemed to play out similarly until the enemy variety diversified towards the tail end of the experience. Finally, I also found that enemies rather irritatingly seem to lock onto your position, so when you think you’ve timed a dodge perfectly, they still find their mark. That level of imprecision means that even an experienced player can be caught out, but for the wrong reasons.

Boss fights comprise Vampyr’s most edgy and exciting gameplay sequences, and some of them are really well designed. One of my favorites had me battling a vampire hunter armed with a crossbow in a room that intermittently shone bright, burning sunlight through its roof in changing patterns. I could have done with a few more of these encounters, though, and it was a shame to see some bosses reused later in the game as conventional enemies.

Still, there is definitely some admirable creativity that has gone into the design of several of these encounters. Overall, Vampyr features an adequate level of difficulty that will challenge most players but certainly not thwart them to the point of frustration. Of course, you can always go and harvest more NPCs for experience to make things easier.

Other blemishes that can frustrate during combat pertain to Vampyr’s technical performance. Running on a vanilla PS4, the frame rate does occasionally chug, random loading screens appear in the middle of gameplay, and there’s a bit of stutter here and there. It’s nothing too serious, but it’s certainly not a butter smooth experience. 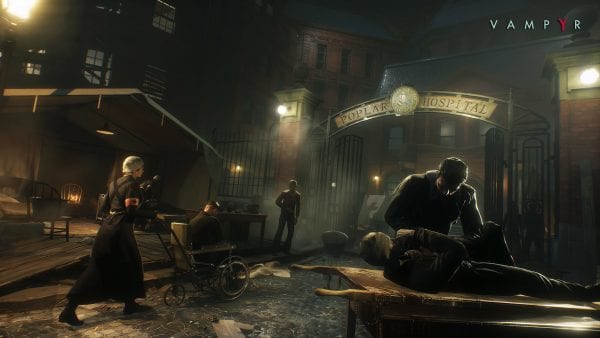 Vampyr is hardly a technical marvel on the whole, though it’s certainly not an ugly game by any stretch of the imagination. What its AA production level and the limitations of the Unreal Engine lack, the level of detail bringing this grim and atmospheric vision of Victorian London more than makes up for. Without sounding cliche, London does feel like one of the game’s characters, particularly because its dynamic reacts and shifts according to player actions.

That all works wonderfully well in tandem with London’s semi-open world design, which feels rather like a Deus Ex game. You’ll never feel overly shackled and you can certainly spend time exploring, but there’s an intimate feel to its composition you don’t get from many games of a larger scope.

But Vampyr never feels small. Partly because it really isn’t small, and also because of how organically you’ll stumble across side quests, points of interest, and various investigations. There are no quest indicators hovering above NPC’s heads, here, or collectibles mapped out predictably around its expanse. Instead, every optional activity you discover in the game has to be… discovered. Either through probing NPCs for additional dialogue or taking the time to appreciate all the city’s nooks and crannies, Vampyr encourages players to uncover London’s secrets without ever holding their hand. You’ll feel rewarded when you do happen upon them, but equally, no disappointment if you don’t.

Ultimately, Vampyr cleverly repackages familiar gameplay mechanics and design in a way that makes it feel fresh and compelling. The moral dilemma of nursing or feeding on London’s population is a terrific video game premise combined with the ability to actually harvest XP from them and use in exchange for new abilities.

The manner in which the world reacts to those decisions, too, and how those knock-on effects shape the outcome of the story is really well done. Did I really feel as though my actions had changed the actual course of the main story and its final sequence? Probably not, but they certainly impacted my overall experience in a meaningful way that they never felt arbitrary.

Ultimately, the sum of Vampyr’s emphasis on story, combat, and progression combine to produce a video gaming experience that will appeal to those outside the RPG and adventure genres that it seeks to combine. My hope is that it finds its audience so that we might yet again see Dr. Reid on an even grander scale in the future.