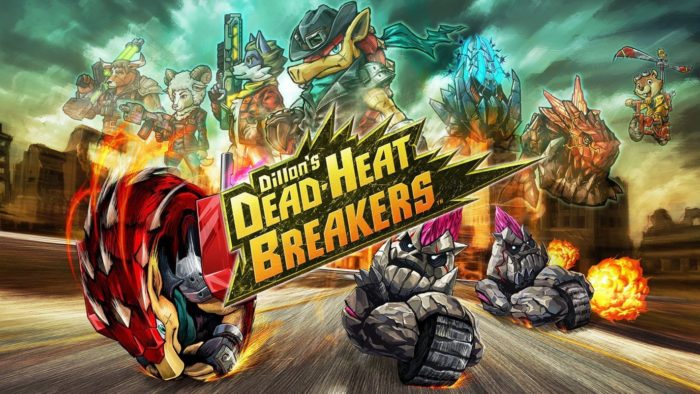 Nintendo has a long-standing history of quirky characters, with some even fronting as the face of gaming. We’ve seen plenty of platforming action from Mario, sword-swinging action from Link, and even intergalactic space battles from Samus. However, when it comes to ripping through the roads and slashing rock-faced monsters, no Nintendo character can do it better than Dillon.

Unlike the first two games, Dillon’s Dead-Heat Breakers ditches the Wild West motif and opts for a more post-apocalyptic setting instead. The world’s been turned into a wasteland, looking like something that came out of Mad Max. Most animals have holed up in “The City” where they are safer from the random attacks from these bizarre rock creatures known as Grocks. Still, there are animals who have chosen to build settlements outside The City and live in the open world despite the impending dangers.

That’s where you, or your Mii, make your grand debut in the game. The game takes your Nintendo avatar and transforms it into a living, breathing character fittingly called an Amiimal in Dillon’s Dead-Heat Breakers. Your Mii’s backstory is simple enough: you’ve managed to escape from your village that was under attack by the Grocks. Along the way, you stumble across Dillon and his ingenious squirrel assistant, Russ, who offer to help free your settlement. It isn’t easy, though, since the Grocks’ mothership has decided to stay put on your home turf. Russ comes up with an idea to craft this superweapon that can blast the thing to smithereens, except that you’ll need both the materials and money to build it. The overarching plot is straightforward and doesn’t divulge too far from the Grock attacks and the nearby settlements.

Throughout Dillon’s Dead-Heat Breakers, you’ll be busy trying to find ways to earn both resources to build that superweapon. Dillon’s Dead-Heat Breakers has two playable characters: your Mii and Dillon himself. When it comes to making money, you’ll be controlling your avatar. Every other day, you’ll be wandering around town and taking up all sorts of different activities in which you can rake up cash, from managing a grocery store to saving mines. On top of that, there are even some days when Dillon can partake in traditional races to earn money. Depending on your performance, you’ll earn a good amount of cash which you’ll need to prepare for your mission.

At the end of each workday, you’ll have to prep for your rescue missions which involve traveling to a frontier and defeating Grocks. Before deploying, you can recruit gunners, AKA your other Miis, who will help you on your mission. Each mercenary has a unique gun that ranges from different damage output to the blast radius. The better the gunner, the more expensive they cost, but it’s always worth spending the extra cash to have some backup on the battlefield. Aside from hiring gunners, you can also purchase medkits and other equipment for both Dillon and your Amiimal for battle.

Come the next day, you’ll set out and head to the settlement with your crew. You won’t have any control over your Mii at this point since all of the action and material collecting is handled by Dillon himself. Missions generally play out like a mix of action, racing, and tower defense. Each turf is set out like a race track, with different bases scattered around.

You’ll have to deploy any gunners you’ve hired to a certain base where they’ll shoot Grocks who walk into their line of sight. There are pigs called Scroggs housed inside each building. Grocks will attack these bases, break their barriers, and eat the Scroggs if you don’t defend it. Any broken buildings will also lose their Gunner, so it’s absolutely worth defending them. If all the bases are destroyed, it’s basically game over and you’ll have to start the battle from the beginning.

Before battles start in Dillon’s Dead-Heat Breakers, you’ll have the chance to survey the field and grab any useful materials, such as ore and Scruffle plants, which you can use to fortify your bases’ walls and increase the Scrogg count. Dillon will also have to generate power for bases that lack energy. If a tower runs out of power, it will stop firing and basically be wide open for any attacks.

Dillon has access to quite a few tricks up his sleeve which he can use to get around. He can quickly roll around the field with his rolling dash, and you can even charge it up for an extra boost. Meanwhile, you can collect green orbs called Arma-Energy that charge a special gauge which enables him to use chips. These chips grant him special effects, such as a major speed boost or launching a bomb, which he can use in both racing and combat.

During the fight, Grocks will slowly start entering the field and start targeting any nearby base. Dillon can approach these Grocks and engage in a battle by running into them. These battles take place in a smaller open field where Dillon can bash into Grocks with his dash roll. The armadillo will start off with two other abilities in battle: a rolling strike and a deadly slash attack. Using the rolling strike is a great way to rip up some Grocks and yield plenty materials from them, which you will need. Meanwhile, the slash attack deals some amazing damage, which is extremely effective when facing larger monsters. Combat feels really smooth and you can feel each hit as Dillon hacks and slashes at enemies. It’s worth noting that you do have a health bar, so you will go down if you take enough hits.

Your Mii, on the other hand, will play a more supporting role who will go around and fight other Grocks. You won’t be able to control them, but you can direct them around the battlefield to take out any enemies that might be on the far end of the map. Moreover, you can even call them during a battle and they’ll come in guns blazing. A big nitpick I do have about my Mii during combat in Dillon’s Dead-Heat Breakers is that the AI is a bit dull at times. More often than not, they’ll focus a bit more on stopping some random Grock than rather prioritizing an enemy who’s already attacking a base. It’s basically in your hands to order your Mii around, which can get tedious when you’re caught up in combat.

Once you take down enough Grocks, things will take a dramatic shift. The enemies will transform into their “racing” forms and start zooming around the field. Instead of engaging in typical combat, you’ll be ripping the tracks to catch up with them. Once you bash into one, you can use your rolling ability or claw strikes to blast them apart. Chase scenes are fast and exciting, especially since you’ll have to beat a ticking clock on the screen. If any Grocks are left once the timer dies down, they’ll transform into large purple “boss” forms and begin attacking bases again. You’ll have to fight them mano o mano once again, but this time in their superpowered state.

Once all the Grocks have been ripped to shreds, you’ll be rewarded with cash depending on your performance and a gem that you can sell for more money. You can also ask one of the gunners to stay for the next fight, but you’ll have to hire them again later on. Upon returning back to town, you’ll switch back to your Mii and hand over all the necessary materials and fork up the cash to create parts for that superpowered weapon to save your settlement. If you lack any of the resources, Dillon’s Dead-Heat Breakers lets players take up their past missions to farm the materials and score some extra cash.

Performance-wise, I never stumbled anything too game breaking. There are a few slowdowns here and there, but never during actual combat or races. The graphics are what you would expect from a 3DS game, with nothing really eye-catching. On the other hand, the soundtrack for Dillon’s Dead-Heat Breakers is a completely different story. The music never failed to get me pumped during fights, and it raises dramatic tension during those tight chase scenes.

Dillon’s Dead-Heat Breakers follows a strict schedule of working, saving settlements, and enlisting in races. It may end up feeling a bit repetitive in the long run, but the game aims to mix it up with various jobs, different race track designs, and enemy variations. Despite the constant back and forth between jobs and saving frontiers, I had a great time strapping in for the ride. Dillon’s Dead-Heat Breakers offers a refreshing experience from both the racing and action, mixing both genres with a heap of tower defense for a truly unique experience.