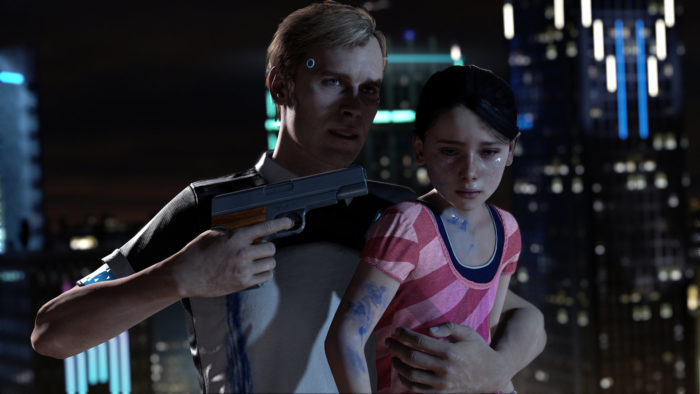 Quantic Dream pride themselves on crafting together a film-like experience for all of their titles; Fahrenheit, Heavy Rain, Beyond: Two Souls, and now Detroit: Become Human, all provide the player with some control over the story. But with Detroit, it’s been taken to the next level. Heavy Rain and Beyond had several different endings, but Quantic Dream does something truly different and unique with Detroit, something that will make you replay each and every scene to find out all of the outcomes and it’s more than definitely a task that you should do if you want the entirety of the experience that’s presented to us in the game.

Playing through the three semi-interwoven stories as Kara, Markus, and Connor has you making so many choices that can and will change everything based on how much (or little) you’re willing to engage with your environment. For example, towards the beginning of the game with Kara, you’re ordered to clean up your owner’s home, choosing how far you want to go with the duties that you’re given. If you go into a certain room, you can find a gun inside of a drawer that will open up a choice in a future scene. You can also just not run into it at all, making that item unusable later on.

These intricacies weave and flow with the story together in a way that will just boggle your mind once you see that flowchart at the end of every gameplay scene. This flowchart not only shows you the percentage of options that you explored, but you can see every single situation that could have or did happen during your gameplay. Seeing the chart makes you think about how you could have tackled that situation differently or lets you take a deep look at how many ways it could have played out. Even though the main game takes about nine hours or so to finish in one playthrough, there’s a ton of other choices that could have been made and loads of other conversations that you’ve probably missed.

It’s hard to imagine a story-driven game that features androids going about their daily life can be satisfying to play over and over, but Detroit finds a way to pull this off. There’s a point to going back and completing that flowchart, there’s a valuable reward for your efforts. In so many instances, you’re essentially playing through a completely different story. One game that sports a similar appeal was last years NieR: Automata, which surprised players with how rewarding it makes multiple playthroughs. If you’re invested in it, you’ll be treated to obvious changes like departures from the original main storyline and different endings, as well as subtle details that make you feel intelligent for noticing them. You also feel more connected to these three main characters the more you dive deep into their narratives and the choices that they would make and how they react to certain situations, creating a more fleshed out version of them. Simply playing the game once will only let you see one side of each of them, but in reality, they are all multi-dimensional and you can choose what light you would like to see them in.

Another game that comes to mind when I think about Detroit’s multiple paths is Until Dawn, which provides the player with tons of choices that can severely alter the few endings that the game has. Ultimately, at the end of that game, it’s all about who you kept alive at the end of the narrative instead of discussing the actual end of the game, which plays out pretty much the same way regardless of the paths you chose to take and decisions you made. What Detroit does differently is the fact that one character’s death won’t really affect another player’s story, leaving that branch of the storyline to be obsolete, while continuing the other’s without a hitch.

Playing around with the scenarios and dialogue options is the most fun and rewarding aspect of Detroit: Become Human because there’s so much that can go wrong and so much that can go less wrong. It was a really strange feeling to go through a scene and think to myself, “There’s not too many things that could have happened differently,” and then proceed to see that flowchart and realize that you only experienced about 40% of everything that that scenario had to offer your character. Completing more and more of the flowchart will not only let you see other outcomes but you’ll get to explore new areas that you haven’t been to before, filling out the gray areas of Detroit and taking advantage of everything the android-filled world has to offer, giving you more insight into how everything works and provides more context, which will most likely allow you to make better-informed decisions in the future.

Quantic Dream has cooked up quite a delicious narrative-based experience that honestly makes your choices have a certain gravitas to them, unlike other games that promise different endings and outcomes. Like previously mentioned, you can end up finding that key item that can give you the upper hand in a confrontation or you can miss it entirely and just try to talk it out or run away from the problem – the options are massive. Detroit does everything in its power to persuade you to experience the story not once, not twice, but many many times, and you more than definitely should. Seeing those flowcharts fill up to 100% for every scene will be one of the most rewarding and satisfying things that you can feel in a game like this. It might take a while to go back and sit through the game multiple times, but as long as you complete different objectives and take risks that you normally wouldn’t take, then it should feel like you’re playing an entirely new game.