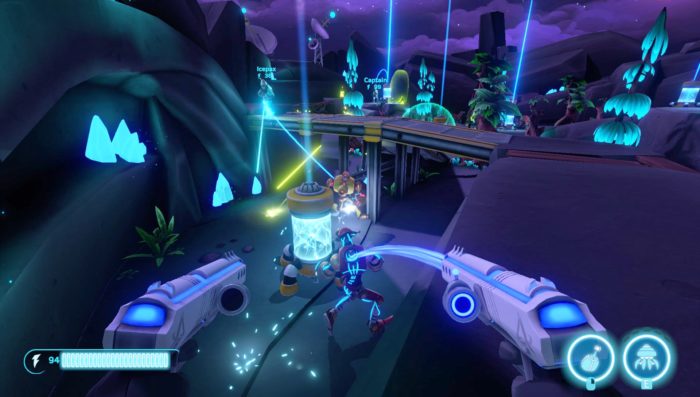 Aftercharge, an asymmetrical team shooter from Chainawesome Games (Knight Squad), shares little in common in terms of gameplay with the incredibly popular Rocket League. That said, its competitive but light-hearted fun nature, the fast pace of its matches, overall polish, and the way it’s embracing cross-platform play gives me strong Rocket League vibes. Whether it can go on to replicate that same level of stratospheric success remains to be seen, but it certainly left a big impression on me during my first hands-on play session.

Aftercharge pits two unequal teams against each other. One side is completely invisible but vulnerable to damage, while the other side is invincible but has the tough task of locating the opposing team using special traps and intuition. Essentially, the invisible robots on the attack have to sneak around and destroy all objectives to win the game. If you liked the idea of Evolve but lamented how long uneven games could go on for, Aftercharge is taking the essence of that formula’s best parts and condensing it into a bite-sized package that should be easier to balance and maintain. Not to mention, the rounds are so quick (usually around 5-10 minutes) that being stuck in an unbalanced game shouldn’t be nearly as painful – not unlike Rocket League, incidentally. And in Aftercharge, you’ll also play as both sides, which helps to keep things fair.

On the attacking team’s side, there are different classes with varied abilities to aid them to tackle their objectives, but each shares the common trait of invisibility. When killed, robots aren’t completely removed from the match upon death but are instead able to be instantly revived by a teammate. You’re only out of it when all three team members are down at the same time, which is how the defending enforcers win. The enforcers, also with their own abilities dependent on class, have to babysit the objectives and use traps to take down the robots. They all have a motion tracking device, that only works when pointed in the general forward direction of the invisible robots, which helps cut down on the guesswork.

Both sides look easier to play than they actually are. I was genuinely surprised at how complex both sides are to play, even this early stage of development. Playing as the invisible robot, I had to be careful not to get greedy, and communicate with teammates to properly coordinate abilities that would give us the ability to break through the enforcer’s defense. On the flip side, keeping the robots down while also remembering to defend the objectives is very challenging considering how quickly the robots can revive each other. It feels like you can really only do one or the other and enforcer teams will need to communicate things like where robots were last seen, and where to defend in order to succeed.

According to communications officer Laurent Mercure, Aftercharge is being pushed as a competitive game, and right at launch, there should be some kind of “tournament” mode – though details are still being finalized. There will also be a spectator mode that will allow viewers to see what’s going on from both perspectives.

Mercure reminded me that Chainawesome Games is a one-game studio, meaning that Aftercharge will be given full attention with a bountiful amount of post-launch content and support. This could include things like new maps, new character classes, and if the demand is high, new game modes as well.

Based on what was presented at PAX East, Chainawesome Games has a great shot at having a hit on their hand. Knight Squad was an under-appreciated party game buried by its choice to launch as an early Xbox One exclusive. This time around, though, with cross-platform play including the Nintendo Switch – a platform ripe for a competitive title like Aftercharge to thrive – Chainawesome Games should be in a much better position to succeed.

Aftercharge is due out sometime this year for Switch, Xbox One and PC.