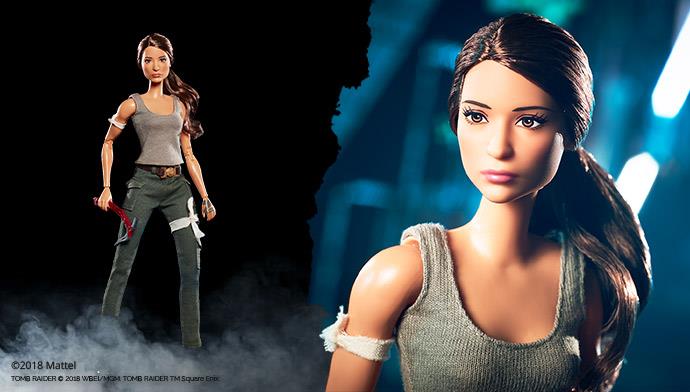 The upcoming Tomb Raider movie has received a lot of attention and promotion. Even Mattel is throwing its hat in the ring with a Tomb Raider Barbie doll. The company recently announced the doll, which is based on Alicia Vikander’s portrayal of Lara Croft, which is in turn inspired by the 2013 Tomb Raider and 2015 Rise of the Tomb Raider video games.

“Meet Lara Croft, inspiration for the Tomb Raider Barbie Doll,” reads the announcement page. “Based on the main character from the upcoming movie, she’s the fiercely independent daughter of an eccentric adventurer who vanished mysteriously…”

According to this page, “Tomb Raider Barbie Doll is sculpted to evoke the likeness of the character and comes dressed in an outfit inspired by the movie.” The figure will come with a map, journal, climbing axe, doll stand, and Certificate of Authenticity. Furthermore, this Barbie/Lara Croft figure will feature “special Barbie Signature movie-themed packaging” and more articulation than most Barbie dolls. Judging by the promo pictures, this articulation is includes the head, elbows, shoulders, wrists, legs, and knees. While this level of poseability is shy of a standard action figure, it is still enough to “re-create all the super heroic drama and action.”

Tomb Raider Barbie is part of Mattel’s Signature Barbie line, a series of special and fairly expensive dolls designed for adult collectors. Some dolls are inspired by movies and television shows, such as Wonder Woman, Jurassic World, and Star Trek, while others reference real world fashion designs or old Barbie dolls. A few are even collaborations between Mattel and other popular fashion labels, including Hello Kitty, tokidoki, and Tommy Hilfiger.

While the movie won’t hit theaters until March 16th, Barbie collectors can pre-order the figure now for only $29.99. According to the store page, the Barbie Dolls will officially release on March 9th.