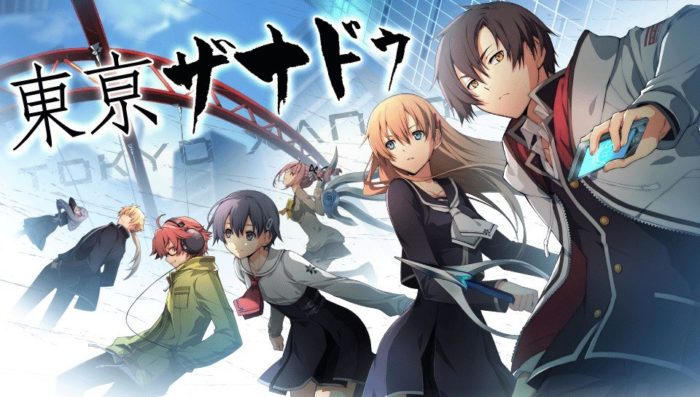 I’ve been a solid Falcom fan since I played The Legend of Heroes: Trails in the Sky on the PSP during the dying days of the handheld. Being a huge RPG fan myself, I couldn’t help but fall in love with the story and characters of the game. After finishing it, I began seeking out Falcom’s other games and was excited to learn that they were trying something “new” with their project called Tokyo Xanadu. Released during 2015 in Japan, the game focused on high school students dealing with “paranormal” activities spawning around Tokyo.

The first thing to keep in mind is that the game is in full Japanese dub with no English voice option. In Tokyo Xanadu, you take control of an ordinary high school student named Kou Tokisaki who stumbles across his transfer student classmate, Asuka Hiiragi, getting assaulted by two thugs. After a predictable turn of events, the thugs get sucked into a paranormal portal called the Eclipse where demons known as Greed lurk. From there, the plot slowly begins rolling forward with Kou getting caught up with Asuka’s affairs in invading these scattered Eclipses and eliminating the Greed.

Tokyo Xanadu heavily relies on typical anime stereotypes to get by, like with Kou being your run of the mill, non-engaging anime protagonist who comes off as “lazy” yet has a strong sense of duty to his friends. The story itself is pretty predictable and I personally wasn’t too surprised by most of the plot twists Tokyo Xanadu threw at me. Even during the early hours of the game, you could easily make out which character had hidden motives or how they would react to certain events because they were pretty much tied to their associated tropes.

In terms of pacing, Tokyo Xanadu plays out through chapters which are awfully similar to something like anime episodes (the opening movie even plays each time a new chapter starts). You’ll have to be a bit patient with the opening hours as they can be a bit dragging, especially since some plot points are explained through flashbacks. However, these moments all seem to be part of the game’s world building which comes into place as you progress in the story. Tokyo Xanadu has a calendar system that really isn’t too important but Kou usually spends the first day in every chapter focusing on his part-time jobs. Before he works, I had the free time to do some optional quests, hunt for Eclipses, and visit my friends that were busy doing their everyday activities around the city.

Despite the initial stumbles I had during my first few hours, I found that the game’s cast truly shines when I got to spend some personal time with them. I learned more about their motives and personality behind their given cliches as we hung out and simply chatted. Tokyo Xanadu only gives you a certain number of times you can hang out with people in one day, so it’s impossible to learn about everyone in one playthrough, which led me to really think about who I wanted to spend my time with. Kou also has a set of personal social stats that can be increased by doing various activities like reading books and completing quests. If you manage to get a star for each parameter, you can report to Kou’s grandfather and earn some rewards like accessories or money. While I personally didn’t keep track of my stats, I received my fair share of useful items whenever I would stop by and report them.

Once the “school day” is over, the following day usually contains the main meat of the game as the plot usually shifts to Kou and his friends trying to figure out more about the Eclipse and how it’s affecting the people of Tokyo, specifically Moriyama City. During investigations, the party will enter Eclipses which act as the main dungeons of the game which is where the most exciting stuff happens. Here, you’ll pick three characters from your party and explore the area to the end while kicking some Greed butt along the way. Tokyo Xanadu only allows for one active character in dungeons, but you can easily switch between your two reserve members at any time. Combat is fairly simple enough as characters can lock on their enemies and chain combos together with their normal attack or fight from a distance with their ranged moves. You can also charge your normal attack to deliver a powerful blow and use a flying attack to hit enemies or cross gaps or traps in Eclipses. There is also an element system in play where enemies each have their own set of weaknesses.

As you progress, you’ll unlock more playable characters that each have their own specific playstyles and elements which make them more effective against certain enemies. I personally liked using Mitsuki who specialized in fighting enemies with her ranged attack and Sora who could perform a flurry of quick, yet powerful punches. Each character also has their ultimate ability that can deal plenty of damage and is best saved for boss fights waiting for you at the end of major dungeons.

When fighting Greeds, battles are usually fast paced. For the most part, you’ll focus mainly on chaining moves together and rolling out of harm’s way. Some tankier enemies and bosses require some different strategies like mixing combos, charged shots and ranged moves effectively. There was nothing more satisfying than dodging a Greed’s attack at the last second and punishing them with my own set of moves. You can also choose to avoid fighting enemies for the majority of the dungeons, but there will be times when you’ll be trapped in an open space with two or three powerful enemies. Naturally, the only way you’ll be able to pass through the area is by eliminating the Greed. However, one nitpick I have with combat was its rather confusing inputs as I would often find myself attacking instead of jumping during my first few dungeons.

For a Vita game, it’s evident that Falcom did what they could with their current resources and managed to make some good CG models that match the game’s anime-styled environment. The music is solid too, and even has that personal Falcom touch that I heard from their other games. Tokyo Xanadu usually runs at a stable 30fps but experiences some quick frame drops and slow downs during areas with a lot of enemies and warning signs.

Overall, Tokyo Xanadu has a few quirks here and there, but I still had a fun time battling Greeds and bonding with my in-game friends. Despite the obvious flaws in its plot, Tokyo Xanadu more than makes up for it with its fast-paced action and combat system. If you want to dust off your Vita and play a new action RPG, I would recommend picking up the game.