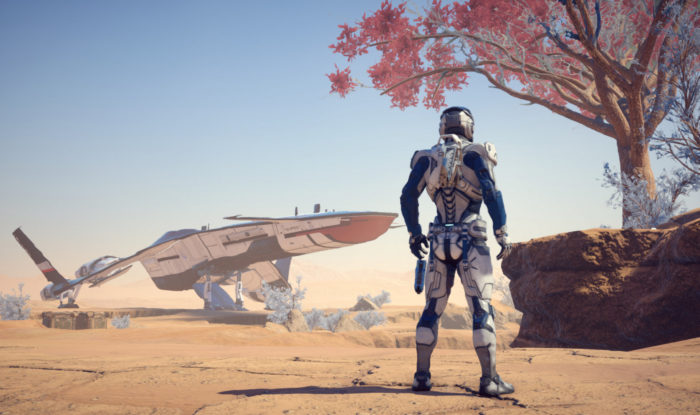 BioWare’s two biggest RPG series may be separate, but they’ve both clearly drawn ideas from one another. With Mass Effect: Andromeda, it’s clear that the title took some inspirations from Dragon Age II, a sequel that was wildly different from its predecessor. Obviously, the core gameplay and ideas remain firmly on the Mass Effect side of things, but there are definitely some notable similarities between the two titles.

The first parallel to draw lies in the story. Dragon Age II takes place in Kirkwall, a location entirely separate from where we spend the first Dragon Age. There are still connections to the original game, including some returning characters, but for the most part it’s a brand new cast set in a region quite separate from the rest of the world, and stays contained to that area the entire time. By comparison, Andromeda puts an entirely new cast of characters on a journey to Andromeda, in search of a new home for humanity and other council races. This gives both titles a fresh feeling, almost like you’re wiping the slate clean while simultaneously expanding the universe.

At the same time, the main characters of both titles have a ton in common. Hawke in Dragon Age II journeys from Ferelden with their mother and siblings, fleeing from the Darkspawn. Similarly, Ryder in Andromeda journeys from the Milky Way with their father and sibling, looking for a new life. Early on tragedy befalls both characters, but each of them find a new life in their respective areas, and ultimately become a hero to the people. It’s hard work, of course, as not many people believe in either Hawke or Ryder early on besides a few close friends. Oddly enough, the two characters also find their respective new homes in disarray, struggling through political issues.

Both Hawke and Ryder share similar origins, despite being in wildly different games. Even past that, the personalities of the two kind of match up. Ryder is a bit more happy-go-lucky than Shepard was, which stands to reason as the quest in Andromeda isn’t quite as dire. More often than not, Ryder has a witty quip or sarcastic remark to add into any conversation, depending on your choices. Similarly to Hawke, they also have a wealth of self-confidence, the level of which again depending on how you play them.

Mass Effect: Andromeda also adapts the same kind of conversation system established with Dragon Age II, rather than the Paragon and Renegade kind of system present in previous Mass Effect games. In Dragon Age II your conversation wheel quadrants were based on the emotion of responses; sarcastic, caring, intellectual, and so forth. These would obviously change at times depending on the situation, which is exactly how Andromeda plays out its conversations.

You don’t necessarily have “good” or “bad” responses, but have ones mapped to certain personality traits or emotions of Ryder. For example, the top left will always be a caring or emotional response with a heart symbol, while a cog symbol denotes a logical response, coming off as cool or cold at times.

This means that Ryder, like Hawke, become more of a fleshed out character, falling in line with however you want your Ryder to react. Similarly to Dragon Age II, this creates a conversation dynamic that plays out much differently than its predecessors.

Although the combat systems of the two series are wildly different, there are still similarities as to how Andromeda and Dragon Age II altered their respective formulas. Both titles take the pre-established mechanics of their predecessors and speed things up, adding even more action than before. Dragon Age II streamlined the tactical battles of the first game, making combat more action-oriented with frequent button presses and skill uses, and less micromanagement. By comparison, Andromeda is a much faster combat system than previous Mass Effect games, focusing on the combat abilities of Ryder themselves, and cutting out a lot of the micromanagement of your squadmates.

There are, of course, many similarities that Andromeda has with Dragon Age Inquisition as well. Examples include the more detailed conversation wheel, and open world objectives and themes. However, for what Andromeda is for the Mass Effect series, it feels much more like what Dragon Age II did.

Oddly enough, you can also draw comparisons between the reception for the two games. Both Dragon Age II and Mass Effect: Andromeda were met with mixed feeback. Both were praised for improved combat systems and strong characters, but a mixed overall story and package when compared to the previous games. In addition, Andromeda and Dragon Age II both suffered from a few noticeable technical issues and glitches.

No doubt, Bioware’s teams learn some valuable lessons from each other, and it’s clear that Mass Effect: Andromeda is supposed to be a fresh start for the series. The faster action-oriented combat, completely separate settings, and changed conversation options are clearly similar between Dragon Age II and Andromeda.The Champion of Kirkwall and the Pathfinder became memorable characters on their own, separated from the achievements of their predecessors.

Hopefully, Bioware can take advantage of what they created with Andromeda and forward its formula into something more, just as they did with Dragon Age II and Inquisition.