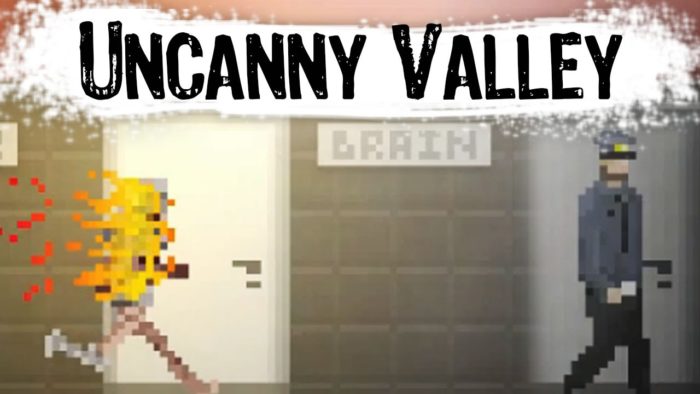 UNCANNY VALLEY ON XBOX ONE

From the minute you first awaken in Uncanny Valley it’s clear that something is off. Protagonist Tom drifts in and out of dream sequences as he starts his new job as a security guard in a small, all-but-abandoned town. Each one is more vivid and disturbing than the next, as reality unfurls during the day and nightmares become realized at night.

The game’s 8-bit style graphics don’t portray the most realistic world but the apartment complex, eerily quiet woods, and empty office building are all incredibly detailed and packed with little touches that bring the world to life.

Each day begins with Tom waking up in his small apartment, shambling over to his dresser, sliding into his work uniform, and heading out the door. A timer begins ticking down the minute you sit up in bed, letting you know just how long you have left until your shift is over. The timer means that you never have a specific goal to accomplish on any given day. This is thanks to the non-linear structure of the game. It never tells you exactly what you need to do. So every day is a race against the clock, uncovering another piece of the puzzle before Tom inevitably collapses from exhaustion and slides back into another terrifying nightmare.

These bizarre dream sequences each venture into a new part of Tom’s psyche, unveiling why he took the job in the abandoned town to begin with and what exactly is going on. You won’t be asked to do much other than run away from shadowy creatures whose only defining characteristics are their glowing white eyes that stand out from their dark forms, or explore a decrepit room.

The main driving force of Uncanny Valley is its narrative. The days are punctuated with small details that reveal more about the game’s enigmatic story, and you likely won’t figure everything out during your first play through. The outcome of the game changes dramatically depending on what you decide to spend your time doing. You may meet an untimely end and find yourself back at the beginning of the game, working your way through the story again, or you might just figure something out and discover a new future for yourself. But each new playthrough reveals details that deepen the plot, slowly revealing what is happening.

While the structure and layout of the game is straightforward and you will rarely get lost, the controls do take a bit of getting used to, especially on consoles. A point and click adventure game like this controls rather sluggishly when you need to use the analog stick to maneuver the cursor to interact with the environment. But the game never puts you in situations where it is overly difficult to find the solution to a particular puzzle.

The lack of direction, while freeing, is a double-edged sword. It can lead to great moments that you never saw coming, or lead to an entire day wasted wandering through rooms with nothing to reveal. Uncanny Valley shines when it is guiding you to the next piece of the mystery. It’s toted as a survival horror adventure game, so playing through waking nightmares, and solving puzzles are what makes the game great.

The visuals may not be incredibly detailed but the fluid animation, fantastic sound design, and sense of atmosphere are felt on every screen of the game. With a length of only two to three hours, it’s easy to finish your first playthrough in a single sitting and jump back in for more.

If you want to rush through Uncanny Valley you won’t get the full experience. One play through is not enough to learn the ins and outs of the town, how to accomplish specific objectives, and what the story is really trying to convey. It’s a unique adventure game that delves into a twisted psyche and tells a twisted, unhinged narrative with simple yet effective art that leaves enough to the imagination to keep some of the horror intact. The only major issue is with the repetitive nature of the game. Because you need multiple playthroughs to properly complete it, some of the game’s more dynamic moments are going to lose their punch. If you are willing to put in the time and dig down to the bottom of the mystery, Uncanny Valley is for you.