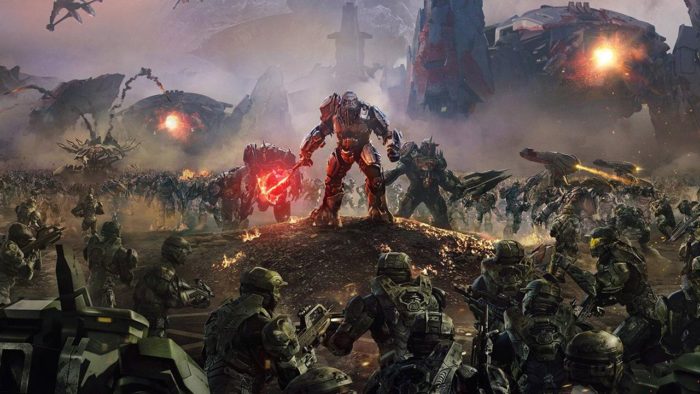 Halo Wars 2 on Xbox One

The real-time strategy genre has always been tough to adapt to a console, but the first Halo Wars found a way to scale back the experience and streamline it, along with a control scheme that worked fairly well. Halo Wars 2 continues that trend, but makes the interface work a bit better, and ramps up the speed and intensity for an experience that can be both stressful and thrilling. The additions made in the sequel aren’t massive, besides unit changes, but Halo Wars 2 definitely feels like the purest way to experience what the original set up.

Halo Wars 2 picks up 28 years after the original, as the crew of the Spirit of Fire wakes up from the cryosleep they’ve been under as they drifted through space. They find themselves at The Ark, the giant forerunner facility responsible for building the Halos, and have no knowledge of how the Human-Covenant War ended. There, they encounter a splinter group called the Banished led by a massive brute named Atriox, who rebelled against the Covenant.

The story of Halo Wars 2 is told across 12 different chapters in the campaign. It starts off strong, setting Atriox up as a terrifying and imposing villain. CG Cinematics done by Blur Studio are interspersed at key points in the campaign, and they’re absolutely gorgeous to behold. Unfortunately, the story it just doesn’t go many places by the end.

While avoiding spoilers, the good news is that missions are varied enough to strengthen the campaign and keep things moving forward. Each one has some kind of unique twist or objective for you to complete, with my personal favorite being one that has you defending different lanes with units and turrets, almost in a tower defense kind of way. The orchestral soundtrack may not be quite as memorable as other entries in the series, but does a good job of supporting the action. 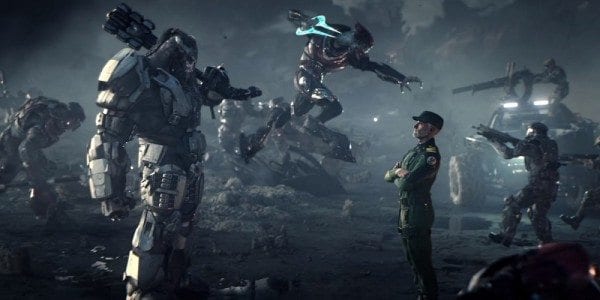 The control scheme from the original game is mostly the same for Halo Wars 2, using the left analog stick to move your cursor and the right to zoom in and out. Luckily, the game makes it easy to zip around the battlefield and select different groups, which is essential for a fast-paced RTS. The D-Pad lets you instantly flip to important points like bases or groups of soldiers, even helping you flip instantly to alert points or set a global rally for soldiers.

You can also assign sets of units to the D-Pad by holding in the right trigger for alternate options. Even past that, you can select units in a circle by holding A, double tap A to select all units of that type or all units on screen by tapping RB, and you can speed up your cursor by holding LB. It’s a quick an intuitive system, that doesn’t feel like it restricts you by being on a controller.

The campaign can also be played entirely in co-op, and raising the difficulty really ups the challenge. For the shortcomings of the main story, there’s actually a ton of lore and side content crammed into the game via Phoenix Logs. These are sections of text accessible from the main menu, detailing characters, buildings, units, and providing some extra insight into the world of Halo and Atriox.

Of course, aside from the five to seven hour campaign, Halo Wars 2 comes packed with a selection of different multiplayer modes. There’s definitely some nice variation that can keep you busy for quite a while. The core multiplayer contains three different modes: Deathmatch, Domination, and Strongholds. Each mode can be played with up to six players. Deathmatch is fairly self-explanatory, while Domination requires teams to hold three different Control Towers on the map to earn points. Strongholds really makes things hectic by giving each team unlimited resources, and the team with the most Strongholds on the map by the end of the match wins.

Gameplay in Halo Wars 2 functions on a “rock-paper-scissors” idea, where infantry beats aircraft, aircraft beats vehicles, and vehicles beat infantry. This isn’t the end all be all of course, as each unit can still take down the other, but knowing these advantages and exploiting them in battle can be key. Accumulating resources to build structures and units, in this case power and supply, happens through buildings you construct at your base. The two factions in the game function essentially different, with both having their strengths and weaknesses that you’ll need to learn. The level of complexity and amount of options aren’t quite as broad as other RTS games, but the streamlined experience helps keep things fast-paced and easy to get into.

Leader Powers add an extra wrinkle into things, letting players unleash massive attacks, or support their units by dropping healing rings or other benefits. Before each match, you’ll choose your leader. Currently, there’s three for the UNSC and three for the Banished, with each one having different strengths and powers. Leaders and their powers really support different playstyles, doing a good job of covering all the bases. For example, Commander Cutter supports offensive players with things like missiles and ODST drops, while the Banished Ship Captain is more about deception, teleporting and supporting units around the battlefield. 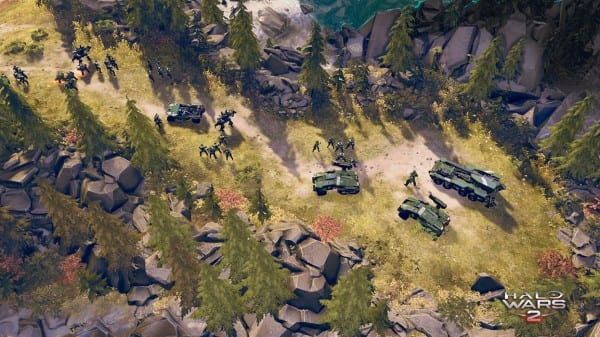 Halo Wars 2 is an incredibly fast-paced game, as you need to get your base up and running and get units exploring immediately or risk being overrun. Because of this, battles consistently stay fast-paced and exciting, leaving you little down time. Matches can easily get overwhelming when you have three-player teams and units flooding every corner of the map. There’s still plenty of strategy involved with taking over extra bases and choosing which units and research to get, but speed really is one of the key aspects of the game.

The best representation of this comes with Halo Wars 2’s new mode, Blitz. In Blitz, you don’t construct bases or anything, instead having a deck of cards that lets you summon new units onto the battlefield or use powers from your current hand. Energy is required to use cards, which you can through a steady flow or can pick up from drops on the battlefield. The objective in Blitz is to hold three capture points until you’ve accumulated enough points to win, and the mode can be played with anywhere from two to six players. There’s even an announcer to shout out killstreaks, giving the mode a definite Halo feel.

There’s a kind of breakneck pace to Blitz since it’s entirely focused on using the right units and navigating them correctly. Trying to balance the entire battlefield can be challenging, especially as your opponent is trying to do the same. The card system keeps the mode variable and spontaneous, as you have to try and constantly adapt to what the other team is doing. You can completely customize the deck of each leader with the cards you want, unlocking more cards through packs of five that you open. Luckily, the game is fairly lenient with giving you card packs, awarding them through gaining levels, beating the tutorial, playing the story, and more. Of course, you can also purchase more for real-world money.

Halo Wars 2 runs smoothly at almost all times despite how hectic things can get. I didn’t experience any slowdown, however, I did have my game crash twice during especially packed matches of Strongholds. Matchmaking was a bit troublesome for finding matches, although that’s a problem that will most likely be alleviated by more players getting on the servers. 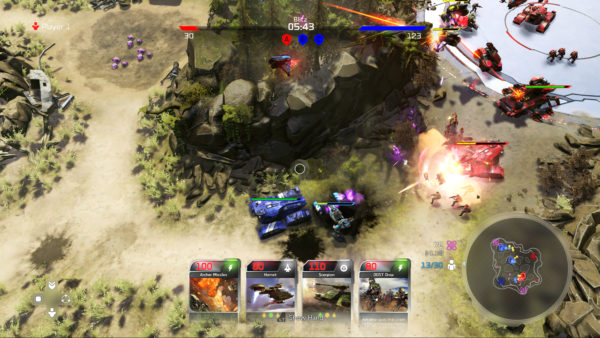 Graphically, Halo Wars 2 isn’t going to be the most impressive game on your system, although the visuals are clear and crisp. The title has an almost cartoon-y look to it, however, it absolutely works for the RTS. The only issue comes when things start jamming up the screen, and it gets hard to tell whose units are whose. In the campaign or against one opponent, this is easy enough as one side’s the UNSC and one’s the banished. Once you bring more units in, though, it really gets cluttered. Blue and red team colors are so similar, that it’s almost impossible to tell. Being able to select all units on-screen at once certainly helps alleviate this issue a bit, however.

Halo Wars 2 may not be some drastic improvement from the first entry, but it helps refine its gameplay and keep the speed of the game at a breakneck pace. Blitz mode is an engaging new addition that definitely has the potential to be a time-sink, while the rest of the modes stand up well on their own. The campaign ends up being a bit of a disappointment, but the mission variation in it is enough to make it worthwhile.

In terms of a console RTS, Halo Wars 2 stands just about at the top. It’s easy for newcomers of the genre to pick up and play, but still has a enough meat and complexity for veterans to be satisfied. Because of how the campaign wraps things up, I truly hope it gets a sequel. But until then, Halo Wars 2 is definitely a quality exclusive to add to your Xbox One lineup.