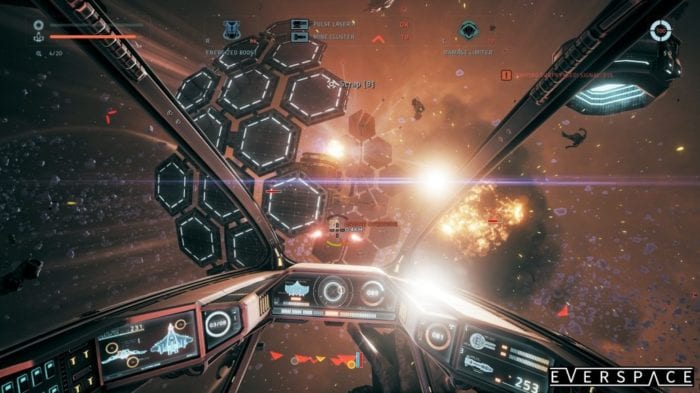 Ever since the recent renaissance of space games, it seems like the Steam store is greeted by a new first-person spaceship fighter every few weeks. This is a wonderful thing, but it has created a space of very similar dogfighting or open-universe games across the board. But Everspace isn’t trying to be the next Elite Dangerous, Star Citizen, or No Man’s Sky.

Everspace, for all of its similarities to the former titles, is a roguelike. The pacing is very similar to that of FTL: Faster Than Light, in that you progress through “zones” of the universe by jumping to smaller areas. In moment-to-moment gameplay, Everspace is a dogfighting shooter that controls like a dream. Everything about maneuverability and shooting just feels right here, though not being able to boost while flying backwards can make combat versus more than one enemy a fool’s errand.

Like most roguelikes, the main goal of Everspace comes from trying to survive as many zones as you can before eventually biting the space dust. You spend most of your time exploring the asteroid fields, grounded structures, and space freighters looking for materials to upgrade your ship and buy new weaponry. There’s also a small element of crafting when it comes to consumables, like scanning probes that reveal all the hidden treasures in an area.

Everspace is generally a pretty tough game, but it has an inkling of overall progression through the game’s perks, which can be purchased and upgraded before the start of each run. There’s a lot to unlock there, including some really key stuff to the experience, like scanning zones to know their threat level before warping into them. You can permanently increase health, damage, and a whole bunch of other stats that will make each run significantly easier to handle.

The loop of zooming into a zone, fighting the few enemies that might appear, looting what you can find, and moving on works pretty well most of the time and can make for some fun experimentation when equipping new weaponry and tools you find in its procedurally-generated world. However, Everspace has a really big problem that roguelikes can often struggle with: the excitement and wonder is gone all too quickly.

Once you’ve taken down the few outlaws that might or might not show up in any given zone, the rest of the game is somewhat boringly flying around a vast space hoping to find some credits to repair your ship or buy more missiles. The combat is fun enough, but there’s not much to it and can’t prop up what still feels like a very unfinished and empty experience. After and handful of runs cut miserably short by a far superior opponent that couldn’t be escaped, it’s the same ‘ol thing.

And unfinished is definitely right, because we’re talking about an early access game. ROCKFISH Games plans to form Everspace into a full experience with multiple ships, more power ups, fleshed out story, and a codex full of world-building information. It’s a pretty ambitious game for its genre, but at the moment, Everspace is a solid foundation that doesn’t beg replaying as much as a roguelike should. There’s no reason to believe Everspace won’t get there someday, but currently as a product, it’s just not.