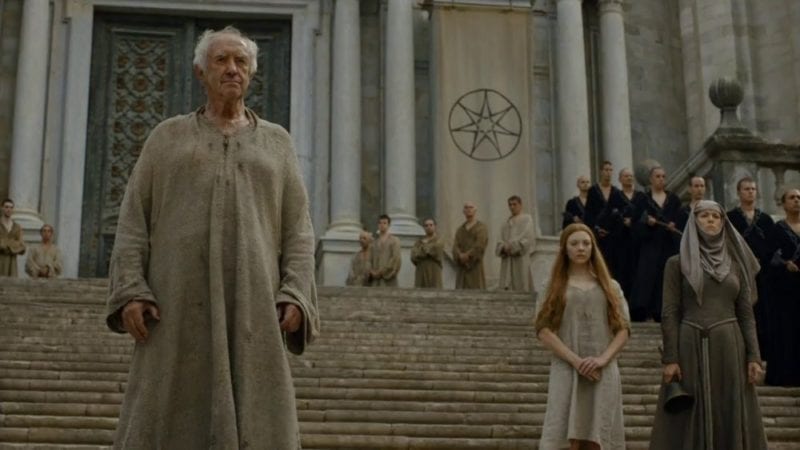 After last week’s gutwrenching ending, it’s hard for the next episode of Game of Thrones to be as shocking or compelling. This episode was not nearly as interesting as last week’s, but serviceable enough. It advanced the plot and showed that the writers are (finally) bringing all the various characters to Westeros, where the real conflict will begin. Gilly met Sam’s family, Bran met a familiar face, Arya revealed her true character, and the High Sparrow (again) outwitted his opponents.

The episode opened immediately following last episode’s finale. Meera was attempting to escape the White Walker’s thralls and Bran was still warging. Bran’s visions continue to be very intriguing and served to catch Bran up to all the events leading up to season one. There were glimpses of Ned, the Mad King commanding to “burn them all,” and many shots of Wildfire. Perhaps these visions are hinting that wildfire will be important in the coming war against the White Walkers. The two were rescued by a mysterious figure. The book reader in me thought it was Coldhands but it was a character that had been absent since the very beginning of the show. The Uncle Benjen mystery is finally solved! Like many suspected, he had been slain by a White Walker and left to become a thrall, but the Children found him and reversed the process. He serves the Three Eyed Rave and will help Bran learn to control his powers and protect him from the Night King.

Meanwhile, Arya finally decided whether she would truly be a Faceless One and serve the Two-Faced God. After rewatching the play and figuring out who had hired her to kill the actress, she poisoned the actresses’ drink. Yet, a heart-to-heart with the actress changed Arya’s mind. They were kindred spirits and Arya, reasonably, concluded there was no reason for this women to die. Especially if it was only because of the pettiness of another actresses’ jealously. She stopped the actress before she could drink it and went back to her boat to get Needle. Presumably she’s headed to Westeros, although the other Faceless girl may prevent that from occurring.

Gilly and Sam went to Horn Hill to meet the Tarlys. It was interesting how beautiful the Tarlys land was compared to all the cold of the North and squalor of Braavos and King’s Landing. The Tarlys were as expected. The women were warm and inviting to Sam, Gilly, and Little Sam. The men were quite the opposite. Randyll Tarly’s disdain and disgust for his son fully matched everything Sam had hinted at throughout the show. Randyll’s berating of Sam and Sam’s meek response at the dinner table was a sad glimpse at what Sam’s childhood must have been like. The scenes at Horn Hill showed how much good Gilly is for Sam. He would never have challenged his father and stolen his precious sword, if Gilly hadn’t stood up for him and reminded him how strong he really is.

In King’s Landing, the Tyrells finally showed up with their army. Mace Tyrell was hilarious in his frivolous armor while giving the world’s least charismatic battle speech. The army marched down to the High Sept to retake Margaery and finally humble the High Sparrow. When the High Sparrow pronounced Margaery did not have to atone, it seemed like he’d finally been beaten. That is until he revealed the ace up his sleeve. Margaery had convinced Tommen to officially unite the Crown and the Faith, rendering the Tyrell’s army impotent. Since now, any action against the Faith would be an action against the Crown. Thus, Jaime, who had been at the head of the Tyrell army and openly challenged the High Sparrow, was removed as Lord Commander of the Kingsguard and sent to retake the Riverlands from the Blackfish. Jaime and Cersei are now closer than ever, and it’ll be interesting to see whether they will be enable to enact the revenge that Cersei promises.

Speaking of speeches, Daenerys gives her best one yet. It was nice to see Daenerys planning for the future and readying to go back to Westeros. She’s been bogged down for too long in Meeren, Quarth, and all these Slaver cities that are irrelevant to the overarching plot. I understand that it’s George R. R. Martin’s analogy to the US invasion of Iraq and Afghanistan, but besides the dragon appearing in the arena, it hasn’t been hugely interesting. But the episode’s final sequence shows she’s fully ready to return to Westeros. Her battle speech on the back of Drogon was one of the most inspirational speeches in the show’s history. Who wouldn’t follow her to Hell and back after that?

This week’s episode served to advance the plot and slowly bring all key character’s back to Westeros. While it lacked the emotional punch of last week, Daenerys’ speech and the High Sparrow showdown was enough to keep it entertaining. Sam’s father was every bit the bastard fans expected. Many expected Gilly would spend more time in Horn Hill and the father-son drama would be more drawn out, but it’ll be interesting to see how Randyll responds when he learns his famed sword was stolen. I hope Arya will hurry to reach Westeros, and she won’t be stuck in Braavos fighting the Faceless girl. Also, more hints to Cleganebowl! Cersei finally confirmed, what many long suspected, that Ser Robert Strong is The Mountain. The Mountain will fight to defend to Cersei in a trial by combat and he may be fighting his brother. We’ll have to wait and see.