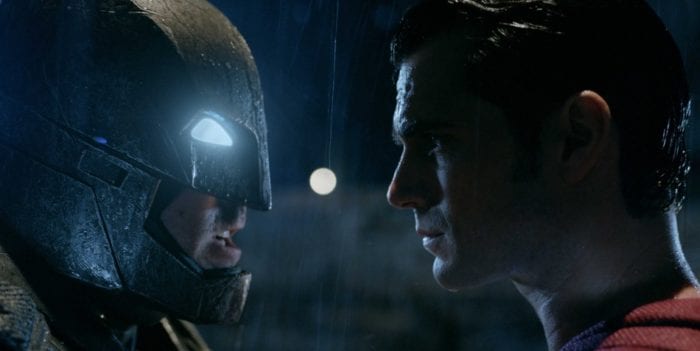 This review contains minor plot details, so if you want to head into this film blind, continue with caution.

Batman v Superman is a movie. Upon leaving the theater and driving home, that was more or less the only real thought that I had after seeing it. I wasn’t entirely sure what to expect; while the reviews were hacking it to pieces with a swarm of meat cleavers, I was still trying to keep an open mind.

It’s no secret that 2013’s Superman reboot film Man of Steel is perhaps one of the most divisive superhero movies of all time, right up there with Avengers: Age of Ultron and The Dark Knight Rises. The quality of that movie is still debated to this day, debates how David Goyer and Zack Snyder ruined Superman with a muted color palette, joyless tone, and death count that makes the titular hero seem like he was wrecking Metropolis just for fun. DC and WB weren’t exactly in the best of positions after that movie released, and since then, they’ve already announced their plans for an interconnected film universe of their own with various heroes and villains getting their own solo and team films. The challenge for BvS is to show that they’re serious about those claims to match up to Marvel’s obnoxiously impressive track record, while also effectively apologizing for Man of Steel existing.

When I say that they’re more or less “apologizing,” I mean that the movie spends a majority of its time making sure viewers know that the world is as divisive on Superman as we were about that movie two years ago. The American government just wants him to answer for his crimes, going on and on about whether he should be allowed to save lives willingly and holding a congressional hearing that goes on seemingly for weeks. To drive home the tragedy of his battle even further, the film opens as Ben Affleck’s Bruce Wayne drives frantically to save his employees during the punch up with Zod, only managing to find one employee and a little girl among the wreckage of the building. As he cradles the crying girl, he looks up into the sky and watches as Superman and Zod fall from space, still fighting and not giving a damn about raining down hell on everyone else.

It’s a really well done scene that provides some context as to why the Dark Knight would consider Superman a threat. Into this mix comes Jesse Eisenberg’s Lex Luthor, a businessman with a grudge against Superman, goading both men into fighting each other through several means, including a stash of Kryptonite, and Gal Gadot as Wonder Woman, a thief with an agenda of her own.

From that point on, things get crazy convoluted, to the point where I’m still trying to figure out if the faults are because of bad editing, or if certain scenes were randomly hacked off to justify the 3-hour Blu-Ray version that’ll be hitting stores later this year. Despite being 2 1/2 hours long, it feels like the movie is rushing to get to its big title fight, providing scenes that theoretically should transition one from the other very smoothly, but don’t. Most scenes feel like they were cut halfway through, in fact.

Snyder once again returns to the director’s chair here, and if you were hoping for this movie to cut back on the Jesus allegories that Man of Steel was overstuffed with, it’d be best for you to take your money elsewhere. Here, both the titular characters are presented as these towering figures that ooze masculinity and muscle that’s supposed to be evocative of some of the best comic book covers featuring them, but neither sticks the landing. The influence of two DC comics from the 80s and 90s runs through everything, from the somber and joyless tone to the visual design of Batman’s power armor. The solo Batman action is more than fun, and Snyder seems to be letting himself loose there in particular, along with the eventual battle against Doomsday. But when it comes to the actual fight we’ve been promised, aka the “greatest gladiator match in the history of the world,” it feels phoned in.

The acting, much like the movie itself, is all over the place. While Ben Affleck is more than a worthy Batman and provides him with enough anger and solemness that comes along with his age, Henry Cavill just doesn’t really bring it as Superman. I’m not sure if it’s because of presentation or the script gives him basically nothing to work with (possibly both?), but the performance feels wooden and lifeless. Throughout the entire movie, he’s got a crisis of faith about whether or not he’s doing any good in the world among all the backlash he’s gotten from a series of PR nightmares, but there’s no real resolution to this. His best moments are when he’s in the Superman suit and has to look like an alien god, though that’s not the praise it sounds like, because he lacks charisma that gives the Boy Scout the dorky charm he’s known for. Amy Adams as Lois Lane is alright, but it feels like the movie isn’t entirely sure what to do with her, and let’s just say she makes some baffling decisions on more than one occasion.

Jesse Eisenberg as Lex Luthor is so all over the place, you’d need a map and plenty of thumbtacks and some string to track where he was going. Some moments he’s a twisted genius going on about God and “devils come from the sky, not the ground,” the next moment he’s talking about his abusive dad. There’s a few instances where it seems like something is genuinely mentally wrong with him, hinting something that feels like both a weird gag someone just threw out one day and a weird attempt at humor that doesn’t entirely stick the landing. During the end, he’s going on and on about an incoming cosmic threat… except the movie doesn’t really indicate that there is one looming on the horizon, save for one very weird dream sequence (more on that later). Perhaps the biggest issue of all, I honestly couldn’t tell you why he had a beef with Superman to begin with, which is kinda the entire point of Lex Luthor.

Gal Gadot as Wonder Woman doesn’t get enough time to shine, but when she does, she’s clearly enjoying herself and having a lot of fun. The instant she shows up on screen in her actual attire, the music flairs with electric guitar as if to say, “Yeah, we know this is what you’ve really been waiting for,” and the scene immediately after where the three heroes stand ready for battle is really cool. At least, until you remember that none of them really know each other up until this point, which is a particular problem here for this Trinity of iconic characters.

Despite the subtitle, Batman v Superman is not the Dawn of Justice, it’s more like a bloom of righteousness. The world building for future DC movies is, to put it bluntly, very haphazard. In the Marvel movies, foreshadowing is saved for the post-credits sequence, or is mentioned offhandedly. Not so here, where the film presents things via a flash drive, and problematically just before we get to the actual point of the movie. It’s been joked that the scene in question feels less like a hint of what’s to come and more in the vein of a press kit, and now having the seen it, I can’t help but agree.

The often-touted apocalyptic dream sequence involving Batman is weird and doesn’t make a lot of sense for a variety of reasons. Exactly how Bruce has these dreams and why they include the things they include is never explained, and will have many people wondering just what the hell is going on.

Still, despite its flaws, I was more or less on board with the film. Good action, some good performances, and doesn’t drag like Man of Steel does. Not a perfect film by any means, and certainly not going to beat Marvel at their own game (good lord, no), but it’s a spring distraction that will probably feel more complete in the Blu-Ray version and currently is a few more edits away from being a full-on fun ride on par with Ant-Man or Sucker Punch. As it is, it gets the job done, but probably shouldn’t expect a full paycheck for a few months.