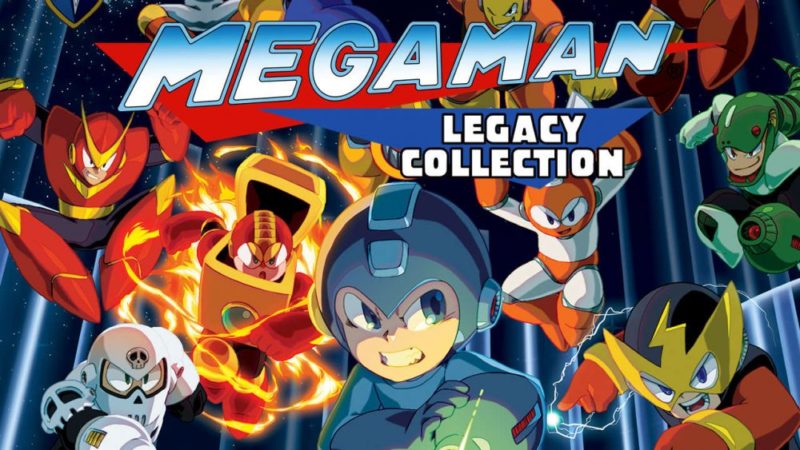 The Megaman Legacy Collection for the 3DS is exactly what it sounds like: a portable version of the console release of the Legacy Collection released in 2015. While the 3DS version doesn’t add anything new, it’s still an excellent collection of platformers that will keep fans and newcomers entertained on their commute or roadtrip.

The Megaman Legacy Collection contains the first six Megaman Games, all faithfully ported to the 3DS. The games’ tight level-design, clever enemy placement, and power-ups all help to remind players what makes Megaman games so “mega.” The stand-outs in the Legacy Collection are the original Megaman, Megaman 2, and Megaman 3; while the later games still suffer from a lack of innovation.

The lifelong debate about the superior entry in the franchise is left up to you to decide, but you can rest easy knowing that you’re playing the purest version available of these NES classics outside digging through your closet for the actual cartridges.

From a historical perspective, it’s an absolute delight to see the evolution of the franchise from entry to entry, with the slide, and charge shot, as defining changes in the series. At the same time, you also see the series slowly run out of steam after Megaman 3 with lackluster boss design (looking at you Tomahawk Man) and lack of new abilities for Megaman levels.

Astute fans may notice that the previously released Anniversary Collection seems to offer players a better bang for their buck, as they include the rare arcade fighting games (Power Fighter and Power Battle) along with everything else. However, the Megaman Legacy Collection stands out thanks to its authenticity and preservation. Something the “ROM-dumped” Anniversary Collection doesn’t do.

The games included in the Legacy Collection have been faithfully recreated to recapture the experience players had in 1987, with a fresh clean-up of sprites and modern design influences. Long gone are the days of blurry character sprites. Each pixel has been lovingly polished to ensure longtime fans experience Megaman the way they remember.

Hell, some players may even complain the game was preserved too lovingly. Digital Eclipse’s faithful port of the original games still includes the slowdown present in those games, which can lead to some frustrating deaths, but does serve as a snapshot of the game’s original performance. Running through levels and letting enemies fill the screen can bring the game to a stutter and cause some sprite flicker. But Digital Eclipse accomplished exactly what they set out to do: preserve the game in its original form, right down to the gameplay glitches. Still, fixing the issues and providing a feature to turn it off and on, would have taken this collection to the next level.

The modern design additions are welcome quality of life changes that add a layer of accessibility to these fiendishly difficult games. The ability to create restore points for each game is a tremendous aid for players looking to make their way through the game at their own pace. This addition does not detract from the preservation, but merely eliminates frustration on the player’s end by allowing people to play the game at their own pace.

The smallest detail that showcases the game as a labor of love is the ability to change Megaman’s name to Rockman. It’s such a small thing, but it speaks volumes about Digital Eclipse’s passion for the Blue Bomber. That passion continues with even more fan-service in the form of museums and databases for each of the games.

In the museum, players can pore through supplemental material until their eyes bleed blue. Concept art, international box art, international advertisements, and far more await players looking to approach the Megaman series from a historical perspective.

The database is a bestiary for all of the games’ enemies. Curious what that spring-heeled death machine was in the original Megaman? Take a look in the database. Each creature has a dedicated page where the game gives a brief write-up, stat break-down, and weakness reveal. Where the database truly shines, is the boss entries. Having trouble with Fire Man? Pull up his page, study everything there is to learn, and select the option to battle him. The game instantly transports you directly to his boss battle (with all the power-ups) allowing you to practice your moves.

Series veterans can be sustained by box art and bestiary entries for only so long, though. That’s where Challenge Mode comes in.  This feature tests players skills, patience, and the structural integrity of players’ 3DS handhelds. That’s because Challenge Mode is hard, like really hard. Taking a page from NES Remix, the Legacy Collection’s Challenge Mode splices the various Megaman games together, keeping players on their toes as they travel from Guts Man’s stage to Fire Man’s.  54 challenges lie in wait to test the might and reflexes of the most grizzled Megaman player.

As an added bonus: 3DS players who own the Megaman amiibo will be rewarded with ten additional challenge stages all formed in the depths of depravity of fans across the world. These challenges were all submitted by fans all over the world in a contest set-up by Capcom and features some brutal Megaman spliced stages.

One small issue with the Legacy Collection though, if it can be quantified as such, is that it fails to utilize the 3D effect of the handheld in any meaningful way outside of menu navigation and colorful game border.

To date, the Megaman Legacy Collection is the definitive way of playing the first six Megaman games. Loving attention to detail, collection of additional resources, and a challenge mode that should keep longtime players and new fans engaged for a long time.