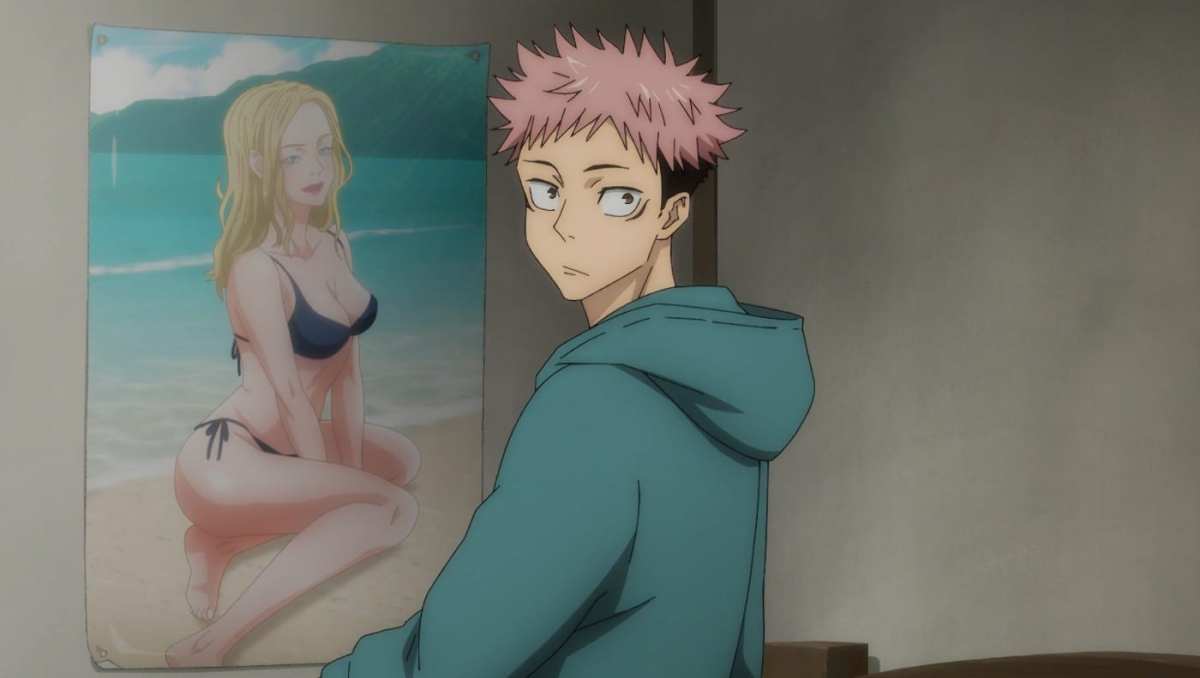 The first season of JuJutsu Kaisen accomplished a lot of amazing features, including awesome fights, animation, and character development most anime struggles achieve even after multiple seasons. One of the most underappreciated aspects of the first season has to be JuJutsu Kaisen’s pop culture references, though.

From celebrity shoutouts to literal appearances from other anime characters, here are 10 hilarious JuJutsu Kaisen Pop Culture references you may have missed in the first season.

Considering how many movies Itadori is told to watch for training during episode 6, it really is no surprise that there are at least two prominent actors that are either referenced or mentioned. This includes a Tom Cruise-like character cutting a wire in an action flick and even a direct mention of Jennifer Lawrence.

Lawrence gets a few more mentions as the show goes on, as well as a poster dedicated to her that is hung up on Yuji’s wall. At one point, he even says, “I’m Yuji Itadori! I’m into girls like Jennifer Lawrence!”

During episode five, Megumi and Nobara are speaking with their elders about participating in an event. Before they can even tell them what it is, Nobara begins to speculate, with one of her guesses being a Super Smash Bros. tournament.

When Gojo is going over cursed techniques, Yuji flops on the floor disappointed, stating how he wanted to pull off a Spirit Gun or Banaki, or Rasengan, or a Dodon Ray. These are references to beloved Shonen anime Yu Yu Hakusho, Bleach, Naruto, and Dragon Ball.

A Rasengan symbol is even show at the end of a little stick Yuji is holding.

When Yuji is showing off his insane physical strength in the first episode, a pair of students say they heard a rumor he’s the reincarnation of the Croation Fighter Mirko Cro Crop, a well known real life MMA fighter.

Sam and Frodo (Lord of the Rings)

Halfway through episode 7, Yuji is whisked away from one of the movies he is watching by Gojo. Right before he is, though, we see that he is witnessing a conversation between Sam and Frodo in Lord of the Rings.

One of the more subtle blink and you’ll miss it pop culture references in JuJutsu Kaisen features a background appearance from Toru Oikawa. This prominent side character from the volleyball anime Haikyuu can be seen in cutout form at the top of the movie theater’s staircase in episode 9.

Episode 11 sees Yuji meet and hang out with Junpei for the first time, as the two bond over their love of movies at a dinner cooked by his mom. Yuji does his best Tom Hanks impression at one point, screaming, “Forgive me, Wilson.”

It seems that even JuJutsu Kaisen sorcerers are big fans of Marvel and all things Winter Soldier. Momo Nishimiay can be seen fan girling over Sebastian Stan when asked what her type is in episode 15’s after credits scene.

As Gojo and the rest of the staff are watching the two schools compete in episode 18, he can be heard referring to himself as “Great Teacher Gojo,” While it might seem slight, this is definitely a shot out to the anime Great Teacher Onizuka.

Despite the fact that they’re villains, the antagonists of JuJutsu Kaisen do some pretty human and hilarious things in their spare time. When they aren’t lounging on the beach, it seems they enjoy playing board games.

Geto, Mahito, and Choso can be seen playing a game that is most likely Hasbro’s Game of Life in episode 24, as indicated by its distinct spinner.