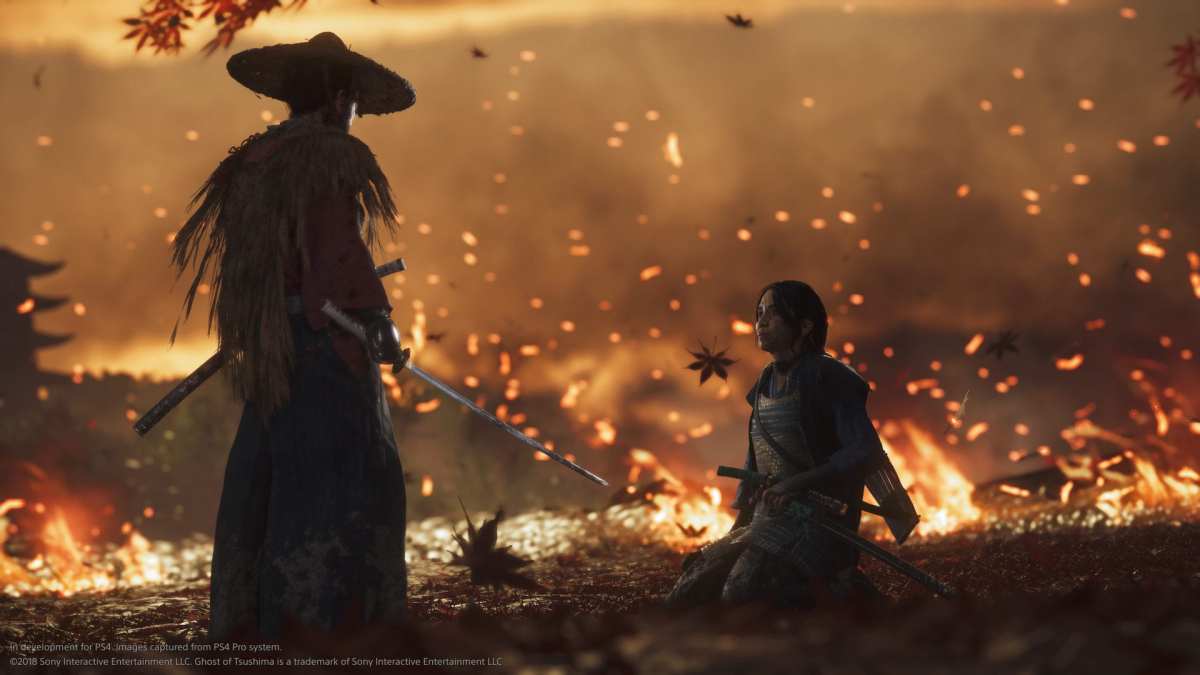 Ghost of Tsushima is out now on PlayStation 4.

Daisuke Tsuji has acting credits in both gaming and live action. On the big and small screen, you might know him from Brockmire, The Blacklist or Letters from Iwo Jima.

In terms of gaming roles, you might know him as Li Phang, Ken Mizuki, and Chao Wei in Prey, The Musician in Death Stranding, or Specialist Recon in Call of Duty: Black Ops 4. He plays the English variant of Jin in Ghost of Tsushima.

Related: Will There Be More Ghost of Tsushima DLC/Patches? on Gamepur

As for the Japanese version of in, Kazuya Nakai is probably best known for playing Roronoa Zoro in One Piece. Elsewhere, he has voiced Ein in God Eater 3, Laz in Valkyria Chronicles 4, and Garu/Ookami Blue in Uchu Sentai Kyuranger, among many other anime roles.

Aside from playing Mads Shultz in Ghost Recon Breakpoint, Patrick Gallagher is pretty new to the video game voice acting world, even though he plays the main antagonist, Khotun Khan in Ghost of Tsushima.

Instead, you’ll probably know him best from his TV and film work. He has played Attila the Hun in the Night at the Museum movies, Ken Tanaka in Glee, and Gary the Bartender in Sideways.

In Japanese, Khotun Khan is played by Tsutomu Isobe. He has voiced Keiji Maeda in Nioh 2, Regis Lucis Caelum in many pieces of Final Fantasy media, and Wolzard/Isamu Ozu in Mahou Sentai Magiranger.

Sumalee Montano might be the best known actor in Ghost of Tsushima’s english cast. You’ll likely know her as Yuri Watanabe in another PS4 exclusive, Marvel’s Spider-Man, Zora Blackwood in The Outer Worlds, Lahni Kaliso in Gears 5, Hawthorne in Destiny 2, Morgan Yu/January (Female) in Prey, and many others. She plays Yuna in Ghost of Tsushima.

In the Japanese cast, she’s played by Yu Mizuno, who provided additional voices for Kingdom Hearts III and Lightning Returns: Final Fantasy XIII but is known well for little else.

Kenji is played by James Hiroyuki Liao (English – left) and Setsuji Sato (Japanese – right) in Ghost of Tsushima. James Hiroyuki Liao is mostly known for his TV work, having played characters in the excellent Barry, Prison Break, and The Shield. For the most part, he’s new to the video game acting world.

As for Setsuji Sato, he’s known for playing Kandachi and Karai in Naruto: Shippuden, Koichi Doi in Kite Liberator, and Lucas Baker in the Japanese version of Resident Evil 7.

Francois Chau (English – left) played Raymond Shen in XCOM 2 but his video game experience is limited otherwise. He’s probably best known for a couple of his TV roles. He played Walter in The Tick and, interestingly, Dr. Pierre Chang in Lost.

Shigeru Chiba (Japanese – right) is more known for his anime work, having played Pilaf in Dragon Ball Z: Battle of Gods and Seisô kyokuin in Ghost in the Shell. He’s also played the Japanese versions of characters in some Western games. He’s Sully in Uncharted, Professor Hojo in Final Fantasy VII Remake, and Raditz in various Dragon Ball games.

Earl Kim (left) plays Norio in the English version of Sucker Punch’s game. Most of him notable roles are small ones in American TV shows. You might recognise him from The OA, Will & Grace, and 2 Broke Girls.

When it comes to the Japanese voice cast, Mitsuaki Kanuka is the actor in question. He has played Crocodile Man in the mouthful that is Doubutsu Sentai Zyuohger vs. Ninninger the Movie: Super Sentai’s Message from the Future, Libertus Ostium in the Japanese version of Final Fantasy XV, and Winnie the Pooh in Kingdom Hearts III.

Lord Shimura is played by Eric Steinberg (left) in the English version and Akio Otsuka (right) in the Japanese one. Steinberg is pretty new to video games, as many of Ghost of Tsushima’s voice actors are but you might know him from his TV work. He is Porter in Star Trek: First Contact, Netan in Stargate SG-1, and Wayne Fields in Pretty Little Liars.

Otsuka is known for playing Batô in Ghost in the Shell, Detective Kogawa Toshimi in Paprika, and even Old Snake in the Japanese version of Metal Gear Solid 4.

Lauren Tom (left) plays Lady Masako Adachi in the English cast and Mabuki Andou (right) does so in the Japanese one. Tom has played characters in some video games, including Gizmo/Jinx/Dr. Poison in LEGO DC Super Villains and Amy Wong in Futurama: Worlds of Tomorrow. She also played Julie in seven episodes of Friends nearly 20 years ago now.

Mabuki Andou is known for playing Angela Miller in Diohazard Regeneration, one of the Japanese Resident Evil movies, Oerba Yun Fang i Final Fantasy XIII, and Kaine and Head Maid in Gate.

Taka is played by Eddie Shin (English – left) and Kappei Yamaguchi (Japanese -right). Shin is best known for playing Noriyuke Tagomi n Man in the High Castle, Henry in Westworld, and Gordy in the Dumb & Dumber Sequel. In terms of gaming, he played Danny Li and Blackjack in CoD: Black Ops 4 but that’s as far as his experience goes.

Yamaguchi, on the other hand, has a lot of Japanese gaming experience. He’s played Red XIII in Final Fantasy VII Remake, Teddie in Persona Q2, and Kuma in Persona 4 Golden, and many others.

That’s it for all the voice actors of Ghost of Tsushima’s English & Japanese voice casts. For more on the game, be sure to check out our wiki guide.