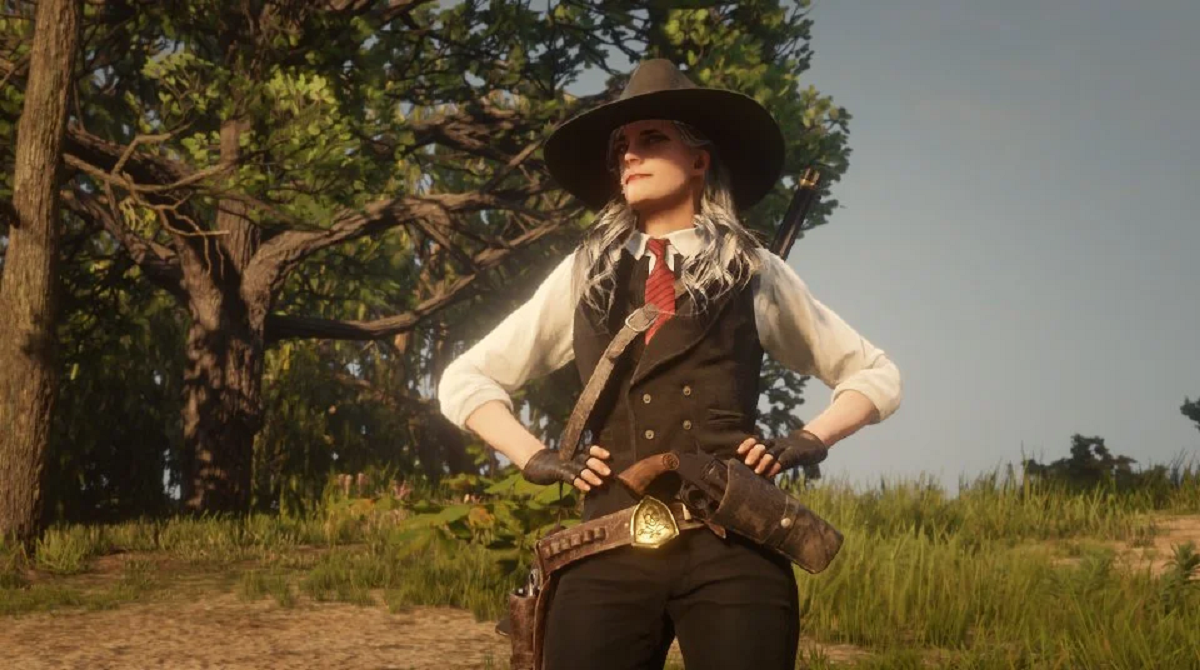 We all want to live out our best lives in Red Dead Online, however not all of us are truly “living.” These are the best Red Dead Online created characters that we have come across so far on the internet that proves we don’t have to be as ugly as we think.

Inspiration For Your Next Non-Ugly RDO Customized Character

If it ain’t broke, don’t fix it. Keep it simple, and sport Arthur Morgan’s rugged default look in both single and multiplayer. /u/AndrewtheKingArthr designed this look, and you can read the comments on their Reddit post to find out how it’s done.

Related: How To Bathe in Red Dead Online on Prima Games

Although Dante’s appearance technically changes throughout the Devil May Cry series, u/C0NT0RTI0NIST really nails two important features: the hair and the red coat. Here’s another shot without a shirt that’ll really slay some demons.

According to u/bus10 (who designed this gem), this is “Hans” and he “immigrated from Austria” and “only drinks beer”. This Red Dead Online custom character also bears a striking resemblance to Alex Louis Armstrong from Fullmetal Alchemist.

You can make single-player Arthur Morgan look like the Man in Black from Westworld or you can design your own Man in Black based on the legendary musician with the same nickname: Johnny Cash. u/TylerMang designed this Red Dead Online tribute to the late, great musician. I assume that the next thing u/TylerMang did with this character was load up on cocaine gum and head to a bar in St. Denis where he shot a man just to watch him die.

This is u/Jimmy_Fantastic’s take on the cold-blooded assassin from the Hitman series. Agent 47 is not a character I’d think you could pull off easily with Red Dead Online’s character creator, but u/Jimmy_Fantastic did so expertly. However, I think it’s going to be a little difficult to earn the “silent assassin” achievement with those sawed-offs.

Overwatch’s newest hero fits perfectly within the setting of RDR2. The hat matches, the hair looks great, and the fingerless gloves u/jansuaco selected in the creation of this character are the icing on the cake. All that’s missing is a horse named “Bob”. This character could also be turned into a lady-version of Agent 47. Just saying.

Micah may not be a character you want to emulate, but u/Hand-of-King-Midas has used Red Dead Online’s character creator to create a darn good doppelganger. We’ll save the spoilers, but if you look like this and you’re not sure why people are griefing you in Red Dead Online, you may want to play through the single-player story.

9. Albert Einstein on a Bender

I’m not sure how u/LordSkelhorn came up with the idea of recreating Albert Einstien, an “off the rails” version of Albert Einstien to be exact, but it works! Einstein was in his 20s during the events of RDR2 (but probably on the rails), so this created character works for accurate headcanon material!

In the comments of their Reddit post, u/Suterusu-shin mentions that it took only “4 resets” and “about an hour” to create this stunning, unique look. “Danny Lockhart” is her name, and she’s the leader of the Lockhart Gang” the creator describes. If you want to steal this look, read the comments to find the preset used in the character creator, along with the itemized outfit pieces.

Any Firefly or Serenity fans here? If so then you probably immediately recognize this Red Dead online created character as actor Nathan Fillion. u/Sebbyrne’s incredibly lifelike creation can be found in the Virtual Cosplay subreddit.

Born into slavery, Bass Reeves later became the first black U.S. marshal who even tracked down and captured his own son. If you’re looking to make a Red Dead Online character who’s on the right side of the law, find out more info on u/Lownacca’s creation in their Reddit post.

u/Mr_Nightshade describes their custom character a “Chinese immigrant on the run from the Triad,” who “doesn’t want any trouble”–headcanon at its finest! In u/Mr_Nightshade’s Reddit post, the top comment from u/theflapogon16 says what you’re probably thinking: “Is there a way to delete my current guy and simply start over?”

u/Noah_j65 calls their Red Dead Online created character Reverend Young, and Mr. Young definitely looks like someone you’d want to have on your side. This man of God looks like he spends more time at the gym than at the pulpit– and I wonder how he got that scar…

u/nomanoah created this hunk of a custom character, and named him “Rhys Callaghan”. You may think this character made the list because we share the same first name, but really it’s because of his ravishing good looks fit for the cover of checkout lane romance novel.

Also, as u/nomanoah informs us in the comments of their Reddit post, because the horse’s name is “Beethoven”.