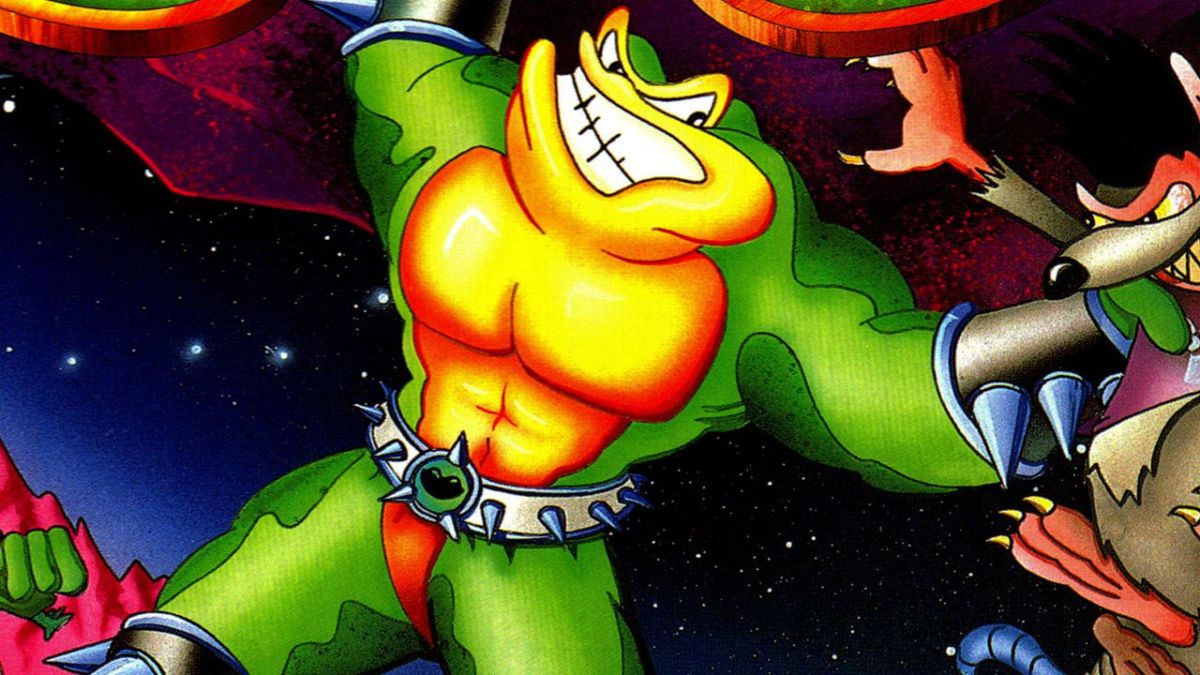 Let’s look at the best 2 player NES games. The NES had a bunch of awesome two-player games. Of course, there were the Mario games, and some others that you’ve heard of, but there are also a bunch of hidden gems. Here are more posts like this, if you’re interested: Best 2 Player PS4 Games, Best 2 Player Nintendo Switch Games, and there’s plenty more, too!

Bubble Bobble was made for two-player. You and a friend play as Bub and Bob, and have to fight your way through 100 levels, destroying enemies with bubbles, in order to save your girlfriends.

In Smash TV, you and a buddy are contestants on a violent game show where you have to gun down hordes of enemies. What’s really cool about this game is that you can play with two controllers using a multitap, which allows you to use two d-pads to move and shoot in two different directions at the same time.

Rampart’s competitive multiplayer sees you each building a set of castles, decking them out with cannons, and then laying siege on each other.

The single-player mode in Marble Madness sees you racing against the clock to get your marble through some tricky mazes, but it becomes even more intense when racing against a real human player, like you do in the game’s two-player mode.

One of the earliest, and also one of the best examples of the run ‘n gun action genre. Contra is an incredibly tough game, so having a friend to help you out is definitely recommended. Just remember the following: up, up, down, down, left, right, left, right, b, a, start. You’ll thank me later.

One of the best ice hockey games on the NES. Blades of Steel actually includes the ability to fight your opponents!

One of the hardest games ever created, and there’s no extra lives code to help out! While the game may be a bit too difficult for its own good, Battletoads is an incredibly ambitious game for its time, mixing loads of different gameplay styles into one NES action game. Unfortunately, there’s a bug in the two-player mode that makes it impossible to complete, but it’s a lot of fun while it lasts.

One of the best sports games of its time, and one that is still revered today. It featured digitized voices, and was one of the first games to feature real sports players!

In a time when racing games weren’t too prevalent on consoles, R.C. Pro-Am II was a great looking and great controlling top-down arcade racer – much improved over its predecessor (which was still quite good). You can’t release a racing game without a multiplayer mode, and R.C. Pro-Am II’s is a hoot!

There’s just something so fun about bouncing around River City with a buddy beating down on some chunky NES sprites.

Double Dragon II sees you back in the shoes of Billy and Jimmy Lee in a mission to avenge Billy’s girlfriend Marian after she is killed by the Black Warriors. It’s another fun beat ’em up game – a genre that is infinitely better alongside a companion.

You can’t go wrong with a Mario game on a Nintendo platform. Before the days of New Super Mario Bros. Wii, two-player Mario involved alternating between Mario and Luigi. This is one of the best Mario games ever released, and it would be remiss to not invite a friend over to join the jolly experience that is Super Mario Bros. 3.

The first TMNT game for NES differed from its arcade counterpart in that it was an action platformer, rather than a beat ’em up. TMNT games are always better as beat ’em ups, though, so it’s a good thing that the second game was a port of the arcade game.

Jackal is a two-player action game where you drive a jeep and blow up tanks, helicopters, and the like. It’s fairly short, but very satisfying.

There was a time when Mario and Luigi actually unclogged drain pipes. Although, it wasn’t with a plunger like a regular plumber would do it. The Mario brothers did it by kicking the shellcreepers and sidesteppers that emerged from them. A two-player game of Mario Bros. may start co-operative, but can quickly shift over to competitive after you accidentally kill your partner once.

The classic arcade game is also on NES. I hope you’ve been practicing your button mashing.

A very in-depth competitive two-player NES game. You must wander from room to room, find a selection of items, and escape, but your opponent is trying to do the same thing. So you have to sneakily set up traps to thwart one another. It was a unique game with some really cool character designs.

A classic two-player sidescroller during a time when licensed games could often be really good (when they were developed by Capcom, anyway).

Bomberman is one of the best local multiplayer games of all time, so its pretty shocking that the first Bomberman on NES was single-player only. Luckily, the second game came along to fix that, and the rest is history.

Take on the role of a warrior, valkyrie, wizard, or elf in this classic co-operative dungeon crawler.

Legendary Wings is a unique shoot ’em up as it is fantasy-themed, something that there aren’t too many of. It features both horizontal and vertical scrolling.

There are two possible ways to play two-player Ice Climber: You can work together to break the bricks and climb to the top of the mountain, or you can climb as fast as you can and leave your ‘partner’ in the dust.

Life Force, also known as Salamander, is actually an entry in the Gradius series, which started with the game Scramble – confusing, I know. Anyway, Life Force retains the great Gradius gameplay, but adds in a simultaneous multiplayer mode and is one of the best 2 player NES games

The objective in Joust is simple: smack the opposing ostriches with your ostrich, but make sure you’re slightly higher than them. It’s simple and fun, but can get a lot harder the further you get – like any good arcade game should –  which is why it’s a good idea to bring along a friend and is one of the best 2 player NES games

Gyromite is a special case. While you could acquire the aid of another human being to help you through the game’s puzzles, it was originally intended to have the R.O.B. robot accessory press the buttons on the second controller. It’s still technically a two-player game, even if the second player is a piece of plastic and is one of the best 2 player NES games

Well, there you have it! That does it for the best two player NES games of all time. Which ones were your favorites?