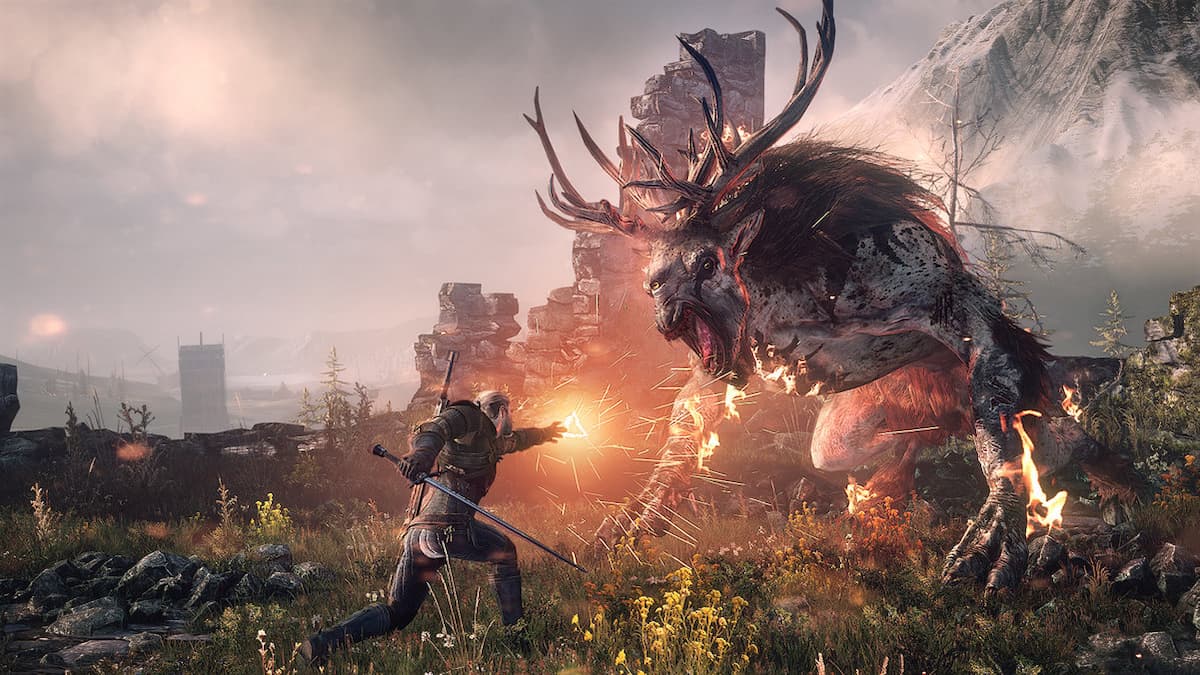 The Witcher 3: Wild Hunt still impresses us even to this today for its plethora of optional activities, with even contracts offering lengthy distractions off the main path. For those not in the know, contracts are activities where Geralt of Rivia agrees to solve some mystery plaguing a person or town and/or hunts down a terrifying monster. One of the most physically powerful beasts you will confront during a The Witcher 3: Wild Hunt contract is the Howler. Here’s how to beat the Howler in The Witcher 3 in the contract Mysterious Tracks.

If you head over to the Velen town of Lindervale you will be able to pursue the contract Mysterious Tracks (suggested level 20, don’t try if you’re under level 18). It seems as if some beast has set up shop in the nearby woods and a local hunter would like your help determining what they belong to before things go horribly awry.

Of course, none of the townspeople are willing, or foolish enough, to figure this out on their own, which is where you come in.

After a quick investigation of the woods nearby, Geralt will happen upon a cave with an entrance that is a bit too high to reach. Head on up to the top of the hill and you will find a hole you can drop into, I suggest casting the Quen sign before dropping since Geralt doesn’t seem to be able to take any type of fall damage.

In here, you will discover the rotting body of a huge Fiend, you may remember this particular kind of beast from near the end of the Bloody Baron’s quest line. After a bit of snooping around, our white-haired protagonist will come to the conclusion that the beast we are after is none other than a Chort, a particularly powerful one that is known as a Howler.

What is a Chort, you ask? Okay, you see that fiend laying on the ground dead? It looks like that, only smaller, uglier, and somehow much more powerful. To make matters a bit worse, you’re going to have to fight this thing in the same small cave you’ve just stumbled into.

First, you’ll have to make a Chort Lure and place it around the outside of the cave. All of the ingredients you need are in the surrounding area so don’t worry if for some reason you aren’t able to immediately craft this stinky concoction. Once that’s done, head back to the cave and wait.

How to Beat The Howler in The Witcher 3

When The Howler show ups, it will require you to remember all of that sign-casting and dodging that The Witcher 3: Wild Hunt has up until now tried hard to beat into you.

Although the Howler isn’t really difficult to damage, it has the ability to deal massive amounts of damage even with Quen activated, especially if you haven’t upgraded that signs intensity. It swipes quickly and ferociously, but if you can manage to keep your distance it telegraphs its attacks pretty strongly, allowing you to roll and then skewer the foul beast in its side.

Cast Quen immediately, then wait for the Howler to make the first move. Keep to its side and you’ll be able to get off quick combos before having to roll away. One very useful resource at your disposal is fire, particularly in the form of Dancing Star bombs.

The Howler is extremely weak against burning and a single bomb along with Geralt dashing in for some open attacks will easily remove over a third of the Howler’s health. Relic Oil will also up your damage output, although it is entirely unnecessary if you are using bombs.

As long as you are able to keep moving, you will be absolutely fine. If you aren’t very good at dodging, invest in some Swallow Potions, upgrade your Quen to the best of your ability, and equip the most potent of healing consumables you can possibly obtain. Howlers are freakishly powerful and shouldn’t be fought head-to-head.

There you have it, all you need to know for how to beat the Howler in The Witcher 3 Mysterious Tracks contract. Hopefully, you fared ok against it and this guide was helpful. For more on the game, search Twinfinite or check out the related content listed below.