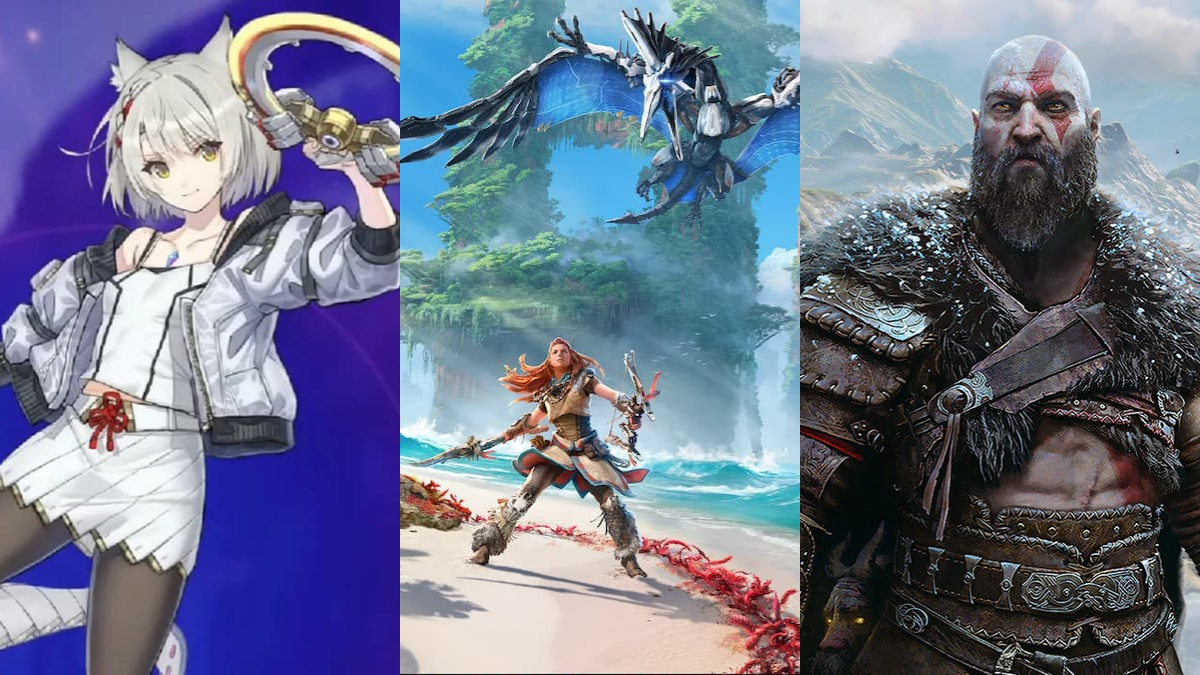 While most blockbuster games are available across multiple platforms these days, there are a select number of special franchises reserved exclusively for one or the other. Often, these are the flagship titles that define an industry brand and the games we look forward to the most. So, as we count down towards Twinfinite’s Game of the Year award for 2022, it’s time to look back at this past year and pick out what we consider the best console exclusive games of 2022, as voted on by our editors and writers.

Managing Editor, Chris Jecks: When Aloy burst onto the scene with a gaggle of robotic dinosaurs chasing after her back in 2017, it was evident that Guerilla Games were onto something. The 31st-century rendition of Earth was a sheer joy to explore, and tearing aforementioned dinos limb from steel-plated limb was seriously satisfying, as we used our arsenal of weapons to disable their weapons, cause their multi-ton bodies to come crashing down to the floor, or see them explode in a blaze of glory.

Forbidden West takes everything that was great about Zero Dawn and builds upon it. Weapon variety has been improved to make combat less samey, characters are fleshed out further, and the new landmass of the Forbidden West is more varied and interesting to explore thanks to refined free-climb and traversal mechanics. Its story twisted and turned, making it difficult to guess just what was going to happen next, and it was all neatly wrapped up in some super crispy 4K visuals that brought this fascinating world to life.

Sure, it’s been overshadowed by a certain God of War and their boy this year, but in terms of a cinematic, open-world AAA adventure, there are few games released this year that stand shoulder-to-shoulder with Aloy and co’s latest adventure. If you’ve got a PS5, this is one you’ll absolutely want to add to your collection.

Staff Writer, Rebecca Stone: For over two decades, the Pokemon franchise has followed what is essentially the same formula in each new generation of games. This year, Pokemon Legends: Arceus challenged that formula more than any of the main series titles that came before it. Players who thought they knew what a Pokemon game was all about were finally treated to something new and exciting.

Instead of the standard objective of raising Pokemon to complete the gym badge challenge and become champion of the region, Pokemon Legends: Arceus had different goals in mind. The game was set way in the past in ancient Sinnoh before the familiar conventions of the world had been established. Living alongside Pokemon was not yet the norm, and catching these creatures was still a novel concept.

That’s why the game centered around exploring the various open areas of the region and completing the Pokedex, and battling was a lower priority than usual. Since technology was still basic in these ancient days, Pokemon Legends: Arceus introduced new gameplay features, such as crafting, in order to fulfill these objectives. Also, for the very first tire, the player character could take damage in the overworld by being attacked by wild Pokemon or by falling from great heights.

It’s not too often that Pokemon fans get a fresh experience when playing games from the main series, and Legends: Arceus scratched an itch that many had been hoping for. Pokemon has always been a Nintendo-exclusive series, but Legends: Arceus set the bar a bit higher, and old fans of the franchise who may have fallen off from the games might be interested in trying this new experience for themselves.

Weekend Editor, Keenan McCall: The Strategy RPG genre has definitely been getting more love in recent years via Nintendo consoles, and Triangle Strategy cements them as the premiere place to play such games.

Boasting all of the best elements of Strategy RPGs, the game is a masterclass in placing players in a challenging yet beatable scenario. They’re given all the tools they need to succeed and need only take the time to consider the best course of action based on their characters and what they can do with them. This makes the game perfect for long-time fans to enjoy while also making it accessible to someone trying to get into the genre for the first time.

Not only that, but there’s plenty of opportunity for affecting the wider world to create better opportunities or push toward the desired outcome to avoid conflicts. Choices can be made that impact the player’s forces both positively and negatively and can lead to gaining or losing allies at key moments in the story or battles.

Elevating the experience even further is the story. While more grounded and political than something like Fire Emblem, it has the kind of intrigue, competing goals, and other meaty plot points that diehard fans of the genre and newcomers can love in equal measure.

When all of this is taken together, one gets an exemplary exclusive that gives people plenty of reason to own a Nintendo Switch entirely so they can experience this fantastic title.

Staff Writer, Omar Banat: Xenoblade Chronicles 3 for the Nintendo Switch is a fantastic example of what can happen when experienced developers only have to focus on a single console. Monolithsoft only had a few chances to create games for the Wii, Wii U, and 3DS. As a result, the games often looked decent, but they failed to achieve the smoothness expected from an action RPG.

Fortunately, All of this changed on the Nintendo Switch with Xenoblade Chronicles 3. Even with the incredible character and enemy models that look much better than past titles, this game actually manages to run much better than all the past Xenoblade games. That alone is an impressive feat considering the massive open areas in this game.

Xenoblade Chronicles 3 pushes the Nintendo Switch to the limits of what it can do visually with large vistas, particle effects flying all over the screen, and multiple massive models moving meandering around the world simultaneously. This only becomes even more impressive when you take the Switch off of its dock the game runs just as well with the same breathtaking visuals.

The fact that the Nintendo Switch can smoothly run a game like Xenoblade Chronicles 3 is a testament to the stellar work that the developers at Monolithsoft are capable of. With the developer’s tireless and masterful efforts, the team was able to create a gem. Xenoblade Chronicles 3 showcases the best of the Nintendo Switch, which is exactly what makes it one of the best console-exclusive video games of 2022.

Weekend Editor, Keenan McCall: To say God of War Ragnarok is one of, if not the, best console exclusives of this year would be an understatement. Taking full advantage of PlayStation tech, the game is a visual marvel. Environments are flush with detail, boasting realistically rendered snowy forests, overgrown fauna, or sand-swept desert landscapes, which move and react with each step one takes or swing they make with a weapon. Characters are just as visually impressive, with detailed skin textures, facial animations, and other elements that sell the emotion, hardship, and struggle they experience perfectly.

And that’s just the visuals. The gameplay is just as impressive, honing the Sony trademarks of parkour exploration and third-person action to a tee. One can spend hours roaming around the nine realms exploring to their heart’s content and battling enemies with the simple yet deep combat system available to them.

Rounding things out is the narrative. Matching the quality of the original and then cranking it up to 11, the story twists and weaves in ways that take players on a journey of conflict, regret, and overcoming one’s shortcomings in truly beautiful ways.

It’s a phenomenal gaming experience that almost anyone could enjoy and provides a perfect example of what a console exclusive should be. If one hasn’t broken down and picked up a Sony console yet, this game is definitely capable of convincing one to take the plunge.

And that does it for our picks for the best console exclusive games of 2022. Did we miss out on anything major? Let us know in the comments down below.