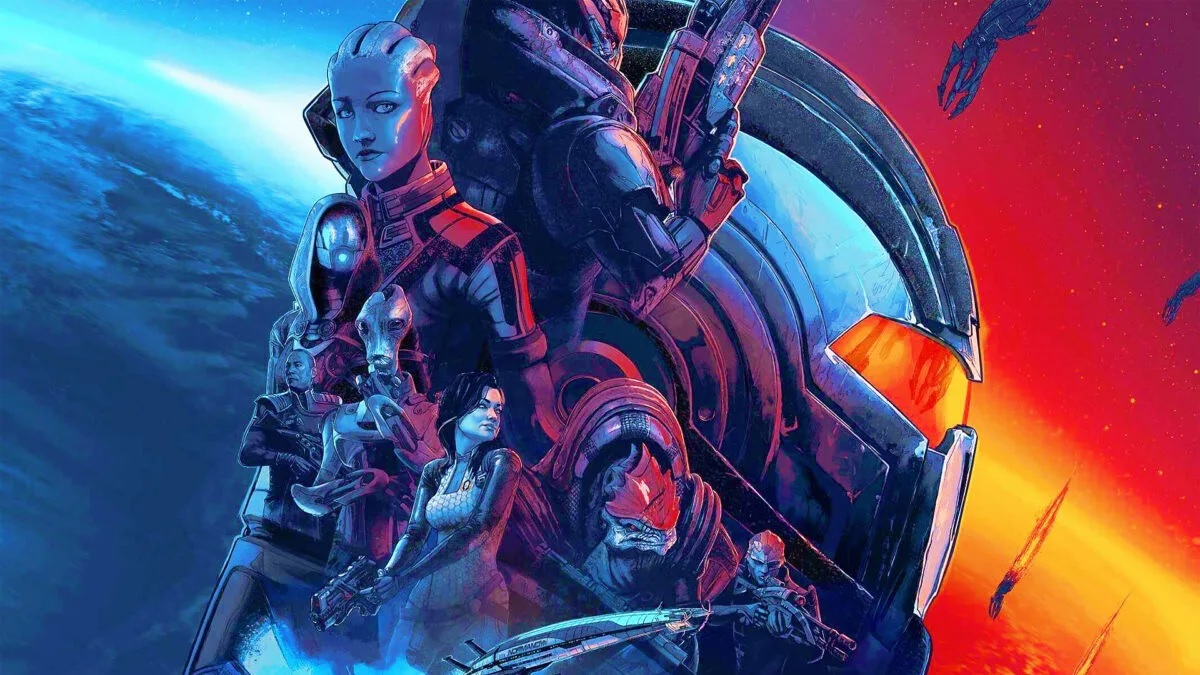 BioWare has been pretty hush-hush about the finer details of the next Mass Effect; other than a confirmation that the game is in the works, fans only have a handful of teasers to sit on. The latest of those teasers comes in the form of an image and a video featured in an official blog post from BioWare, which is dotted with a few obvious hints and others only noticed after further investigation. If you just skimmed the image, here are three hidden details you may have missed in the Mass Effect teaser.

Dotted in the foreground and background are five massive freighters that appear to be Arks. Those were the premier starship used in the Andromeda Initiative to ferry the various races from the Milky Way to the Andromeda Galaxy. Every ship was fitted with cryogenic pods, which the inhabitants would use until they reached their destination 600 years later.

Only half a dozen were ever build, and for that singular purpose, but combined with Mass Effect’s Project Director Mike Gambit Tweeting a cryptic message about Andromeda and the Milky Way galaxy, their presence further suggests that the original trilogy and Mass Effect: Andromeda are intertwined.

Equally interesting is the small ship that flies in on the right, equipped with four distinct and separate blue engines in the back. That design is reminiscent of the Normandy as well as the Tempest, the latter being featured in Mass Effect: Andromeda, though it’s also possible, it’s the same starship teased during 2021’s N7 Day.

The Reveal of a New System

For those who follow through to BioWare’s N7 Day blog post will note that the teaser image is actually part of a 25-second video. While the video doesn’t add much else, other than a hidden message in the audio and a few objects moving for effect, take a look at the name of the video: SA_Intercept_SatheriumSystem_Dock314.

The Satherium System isn’t any known system in the original trilogy or Andromeda, suggesting that this is an entirely new system or at least one that’s been renamed. Keeping that in mind, this new mass relay could be located anywhere in the Andromeda or Milky Way galaxy, given that it doesn’t have that distinct purple Reaper-like design.

Narrowing Down the Answer to the Canon Ending

One of Mass Effect’s most celebrated aspects is the number of choices players are given throughout their journey, but outside that, there is, in fact, an official canon—except for Mass Effect 3. Outside of the five possible endings, the newest teaser all but confirms that only two canon endings are possible now: the Destroy ending or the Perfect ending (which is also the Destroy ending).

In both endings, the mass relays are destroyed, and the systems are left stranded. Mass relays were essential for ships to achieve FTL travel (faster-than-light), so it makes sense that new ones would be built to replace them, but what of Shepard’s fate? If the Perfect Ending is canonized, then Shepard survived the explosion on the Crucible.

It’s also important to note that there may be some contradictions to this, as we do hear what seems to be Geth talking to Liara in the secret message. So if the Destroy ending is canon, which wipes out all Synthetic life, how did Geth survive?

There you have it: three hidden details you may have missed in the Mass Effect teaser. Like all good teasers, it’s left us with more questions than answers, but the pieces are slowly falling into place. What is available to chew on is painting an interesting future for the series moving forward.