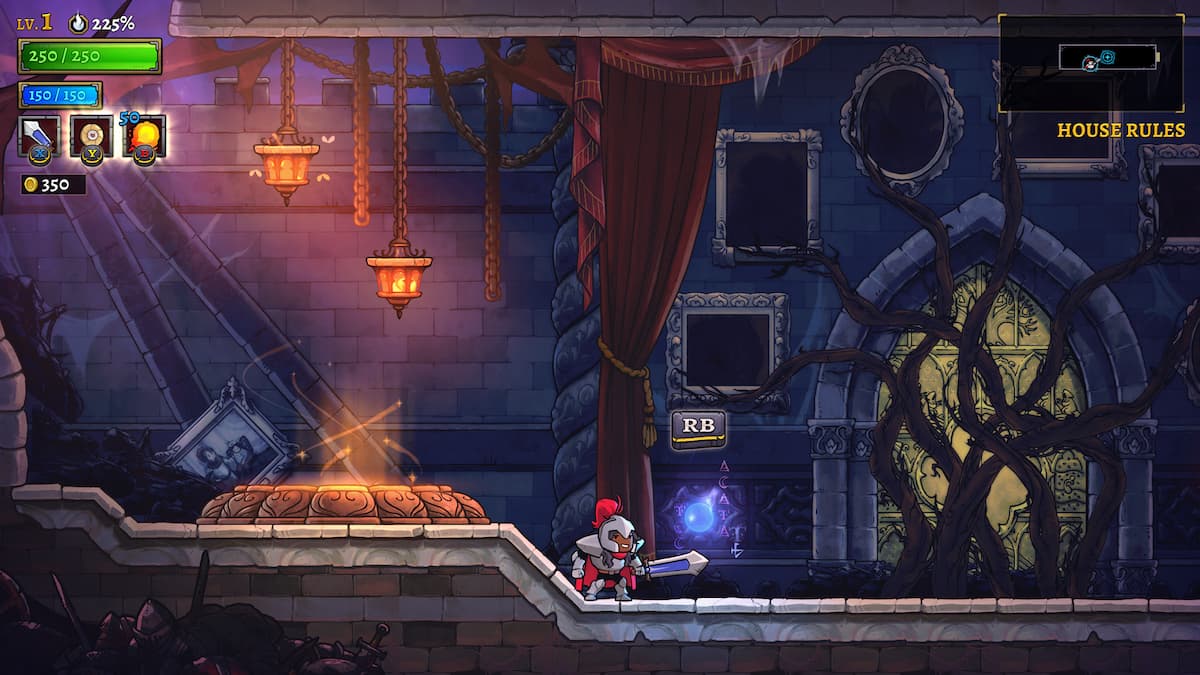 Rogue Legacy 2 has more secrets than the first game, as well as a much more expansive castle to explore. With the castle, you might find these floating blue orbs you can interact with, but they don’t share anything; these are called memory fragments. This guide is to help you with how to read the memory fragments.

How to Read Memory Fragments in Rogue Legacy 2

Throughout the castle, you will find said blue orbs that will offer hints on treasure, side paths, or even lore. They are just as spread out as the journal entries but easy enough to locate.

When you first start a new game and enter the castle proper, you will be greeted with the first Memory Fragment. Interacting with these for now only gives you the message “(You hear a thousand whispers, but can’t make out a voice…).” To be able to properly interact with these, you will have to acquire the Aesop’s Tome Heirloom.

The first thing you’ll want to do is hunt out the proper Heirloom room (orange candle icon on the map) for the Aesop of the Tome statue. It will look like the image below but will be identifiable through the text box when you interact with the statue. Getting to these points can be tricky considering the difficulty of the game and the randomness of the castle, but there are a couple of things you can do to make it notably easier.

If you want to play the game with the default settings, then your best bet is to unlock the Architect that allows you to keep the same castle layout/map from the previous run in exchange for 30% of your found gold. You can find it the Architect here on the upgrade tree. As you can tell, this will take a few generations to unlock and quite a bit of gold.

Now you just have to find the Heirloom room containing Aesop of the Tome, and even if you perish, setting the Architect to “Lock World (Always) will guarantee you will always enter into the exact same castle every single run.
However, if you are cool with making things much easier, you can delve into the House Rules menu. For this, it is recommended you reduce enemy health and damage to 50% and turn off contact damage. Now you’ll just want to turn on Enable Flight Toggle, and you’ll be able to swoop your way through the castle with much less risk of dying before you can find the Aesop of the Tome Heirloom room.
Also, it should be noted that the House Rules menu will not disable achievements.

Once you have found the room, you will have to spin kick your way up to the top using the blue stone lanterns.

Once at the top, you will have to interact with the statue holding the Aesop of the Tome and hit “Yes” when prompted to enter the Heirloom. You don’t have to worry if you got here in a weakened state; starting the challenge will fully heal you and restore any missing mana.

There is no best class to do this with; it should mainly be one that you feel comfortable enough using.

At the very bottom of this level will be a Memory Fragment that gives you a riddle, “He who gives you only two choices, always hides a third.”

On both the left and right platforms, you can drop down are the wrong answer. What you actually want to do is drop down a hidden path in the middle, right under the Memory Fragment.

This room will certainly be more difficult than just figuring out a riddle. You will need to climb up using a combination of jumping and spin, kicking off of the rotating chain fireballs. You will be able to see smoke trails to anticipate their trajectory to plan your jumping and spin kicks.

Though, this area can also be bypassed easily if you want to turn on the ability to fly in the House Rules menu.

This room will require you to traverse it with spin kicks once more. You will also be introduced to a new mechanic: the Nightmare. These orbs pose a unique problem. That area-of-effect you see around them will shoot magic at you if you make any sort of attack while inside them. The magic they shoot will go through any surface and are rather hard to dodge.

Luckily, there is a trick to them. If one is out in the open, you can move up to it and hit the interact button shown above it (RB on Xbox/R on PC) to put the orb to sleep briefly, turning off the area-of-effect. Make your way through the area dodging the magic when you are forced to swing your weapon and shutting down any orbs when you get the option, and you will soon be at the exit.

The trick you just learned about the Nightmares will be very necessary here. You will have to fight several waves of enemies that are all inside the two Nightmare’s area-of-effect. Keep these turned off whenever you can, and try to finish off the enemies as quickly as possible.

This area is actually several different rooms with the common feature of a Nightmare. Sometimes you can turn them off, and sometimes you can’t. This is where it becomes very important to learn the way the magic shoots at you to increase your chances of dodging.

The third room will be you and several knights. Just keep breaking the platforms to drop them into the spikes at the bottom of the room, don’t attack at all.

There you have it, absolutely everything you need to know for how to read memory fragments in Rogue Legacy 2.