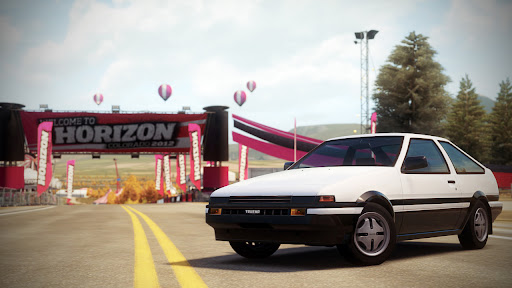 Getting the Toyota Trueno AE86 in Forza Horizon 5

To get the Toyota Trueno, you’ll need to either win it on a Wheelspin/ Super Wheelspin, or purchase it from another player via the Auction House.

At the time of writing, there were no Trueno AE86’s available on the Auction House, though, so you’ll have to get lucky for one to be up for sale and that you can grab it before someone else does.

It’s also possible that you could be given one as a Gift Drop from another player. This would come down entirely to luck, as there’s a very slim chance that someone would gift a Trueno AE86, and an even slimmer chance that you, out of all players, would be lucky enough to be given that drop. That being said, this has happened to us, so it is possible.

Outside of these options, the only other possibility for getting the Toyota Trueno AE86 is to complete one of the Seasonal Objectives. Again, at the time of writing, the Trueno AE86 has yet to be made a reward for any of them, but this could change with these challenges changing every week.

And now you know everything you need to on how to get the Toyota Trueno AE86 in Forza Horizon 5. For more tips and tricks, be sure to search for Twinfinite or see more of our coverage on the game below.