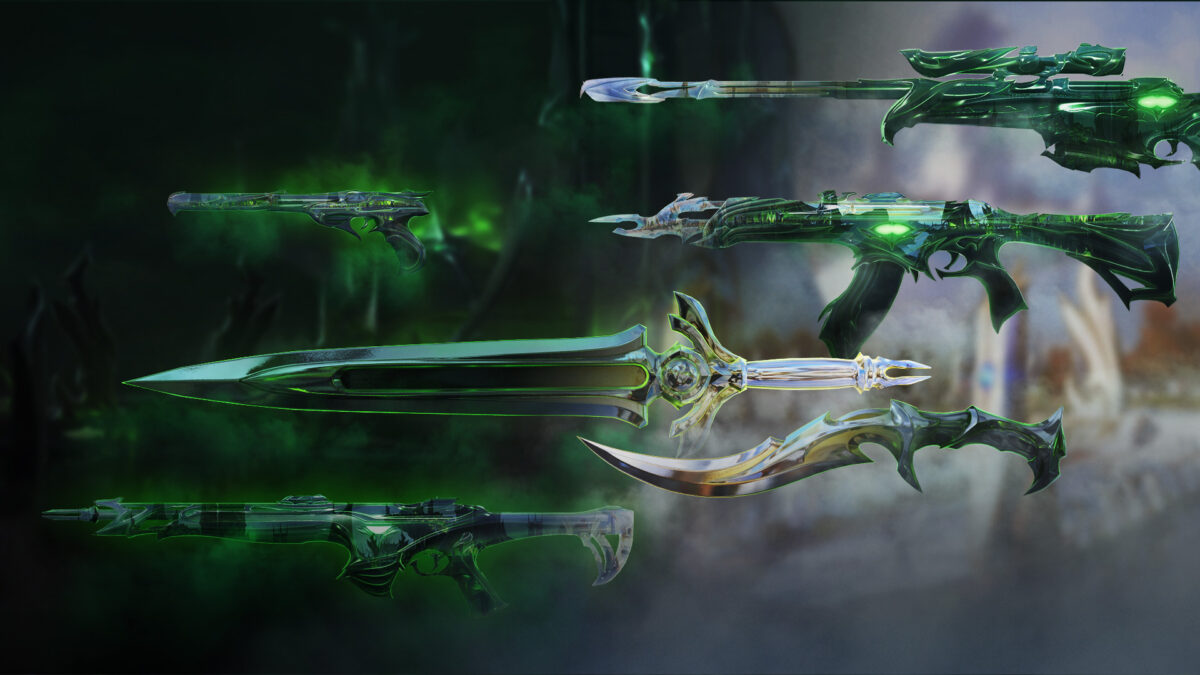 Well, I say knives, but I really mean knife and sword! As you can see in the image above, the skin pack features a new iteration of both the Forsaken knife and Sovereign sword. The theme of the pack overall is a green screen image effect laid overtop the designs of both aforementioned skin lines, which is also the first of its kind.

“Sovereign was one of the first skins we developed, and one of the first skins we made our own “internal skin lore.” We do this for a lot of skin lines to get the team to really understand the depth of Fantasy that we’re crafting, so we come up with a world, a people, and an entire backstory for the skin to help us come up with ideas to push the themes as far as we can. Witch Sovereign and Forsaken, we wanted to play with these antithetical themes, playing into light vs dark. A lot of the world-building that went into those skin lines was so exciting for us and we really wanted to show players what those worlds looked like, and where the weapons came from.

This was an opportunity for us to take some of that internal headcanon from the team and share that with players, and we realized a perfect method to really showcase light and dark themes was with the same shader method we used in the Winterwunderland skins where the gun transitions between two scenes in sunlight and shadow on the maps.”

Here’s a look at the concept art behind both Sovereign and Forsaken. Can we get a Valorant map set here, please!

By the sounds of it, this won’t be the last we see of unique melee weaponry combinations, either; Marino went on to say:

“Similar to when we made Winterwunderland, we wanted to try and find a way to have a really impactful melee that fits with the skins, and the opportunity came up to have a dual-wielding mix for the first time! This sparked a lot of conversations on the team around doing this more with mix and matching archetypes and other melees. This will just be a slow step in making our melee weapons more and more unique and we hope to keep building on this in the future.”

Finally, here’s a quick overview of the key features of the Tethered Realms pack:

For more on Valorant weapon skins, check out Twinfinite’s ranking of the very best skin packs. We’ll have to wait and see whether Tethered Realms makes the cut!