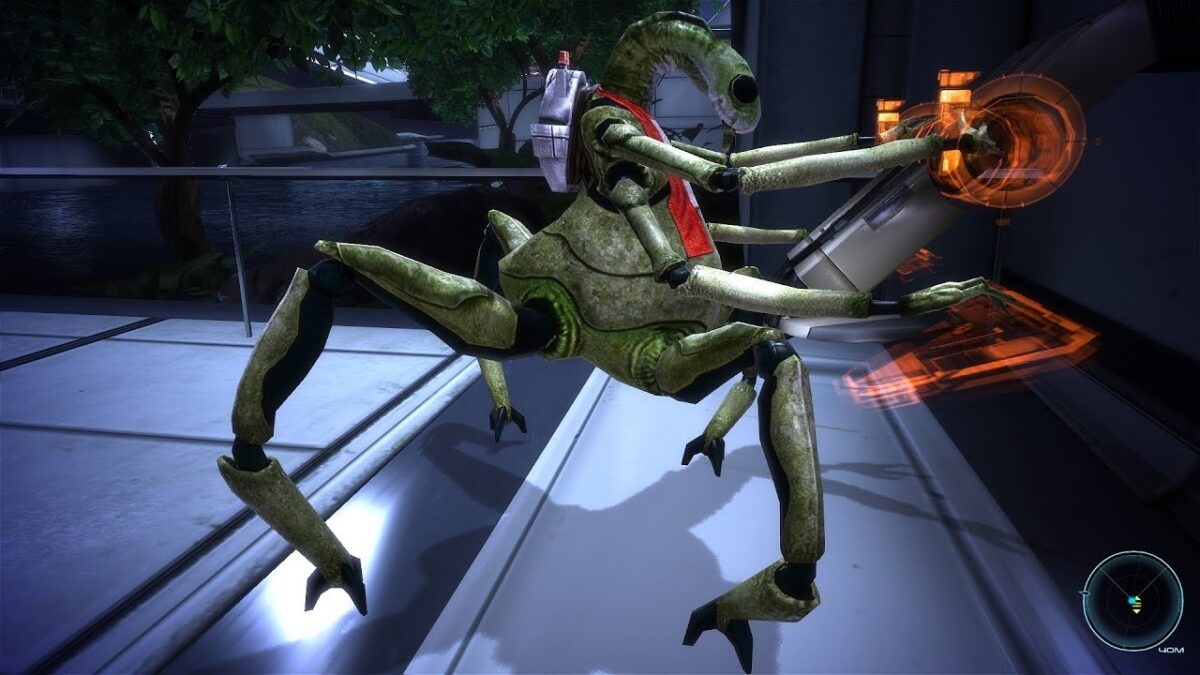 One of the first things you’ll probably notice when exploring the Citadel in Mass Effect 1 is that it has a bunch of weird bug creatures that are typing away on computers. These are known as Keepers, and they don’t interact with you regardless of how hard you want to be their friend. You do eventually get a mission based on them, though, so here is everything you need to know about all the Keeper locations in Mass Effect 1.

Right after your first visit with the Council, Ashley will comment that a Salarian scientist, Chorban, is acting weird around the Keeper nearest you. Go and talk to him and he’ll give you a mission to scan all of the Keepers in the Citadel.

It should also be noted that if you discourage Chorban from continuing his research, or just don’t talk to him at all, you still have another shot to do this mission. You can do this by talking to the Volus in the C-Sec Offices.

All Keeper Locations in Mass Effect 1

The Keepers are located in three different sections throughout the Citadel: Citadel Tower, Presidium, and Wards. Below, we will break down where each of them is with corresponding images to make it nice and easy to find all 21.

The first Keeper is the one that Chorban is scanning.

The next one can be found on the highest section, near a door in the southwest corner of the map, to the right of the Council.

The third Citadel Tower Keeper is located right past Rear Admiral Kahoku to the east.

The final Keeper in this area can be found in the northwest corner of the map before exiting the area to the elevators.

The first Presidium Keeper is found near the elevator to the Citadel Tower next to Avina.

Go to the Northwest where the Wards Access is and you’ll find this Keeper.

Head to the northwest of the Embassy Lounge and you’ll find this Keeper near a room with a human diplomat and an Elcor.

This one is also in the Embassy Lounge, just to the right when you leave Ambassador Udina’s office. Go through the door and it is in the back left corner of the room across from the Elcor and Volus diplomats.

Head to the Consort’s Chambers and you’ll notice it right by the entrance in the southeast.

Just to the west of the Consort’s Chambers, there is a Krogan monument. The Keeper is beside the stairway to the south.

The last one here can be found in the upstairs storeroom of the Emporium.

Head to the Med Clinic in the Upper Wards and you’ll find this Keeper across from the Rapid Transit terminal.

The next Upper Wards Keeper can be found in the northwest corner of the Upper Markets to the left of the Expat’s stall.

Before heading into Chora’s Den, head to the door on the right. You’ll enter an alleyway with a Keeper – this is the alley where you save Tali.

Head to Flux Nightclub in the Upper Wards and you’ll find it behind the Quasar machines.

Right in front of C-Sec Academy’s entrance in the Lower Wards, you’ll find a Keeper near Officer Eddie Lang.

In the C-Sec Academy, go into the Traffic Control room to find and scan this one.

If you head to Wards Access, you’ll find this Keeper in a small room between the lifts.

This Keeper is in the C-Sec Requisitions office.

Head to the Alliance Docking Bay and it is all the way to the right at the top of the ramp. Note: it won’t be there while Citadel: I Remember Me is active. Interestingly enough, you also only need to scan 20 of the Keepers to complete this mission.

Once you’ve scanned all of the Keepers, head over to Chorban to either talk to or confront him, which is entirely based on the decision you made that was mentioned at the start of the article.

That is everything you need to know about all Keeper locations in Mass Effect 1. For more on the game, check out our Mass Effect Legendary Edition guide wiki. It’ll help you progress throughout the game and give you plenty of tips on the best weapons and classes to use throughout the series.