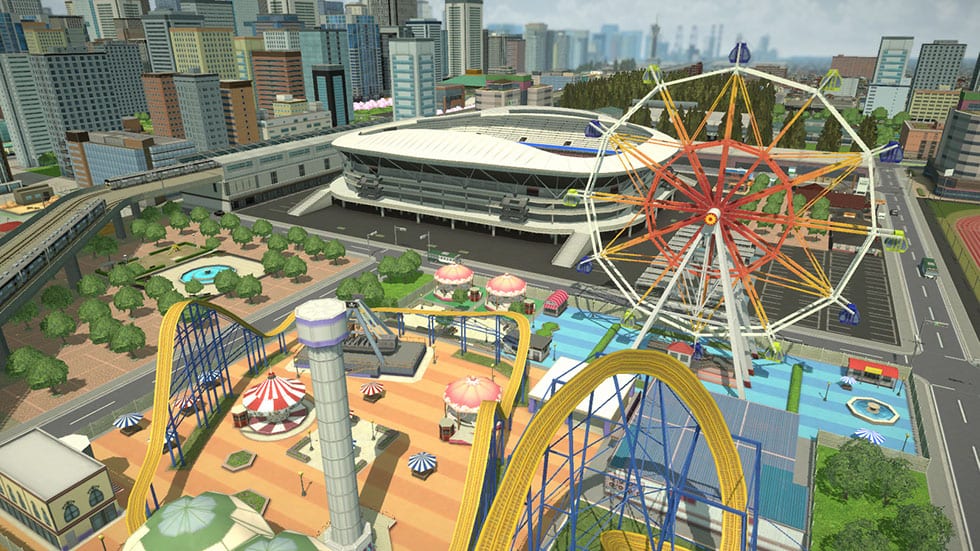 I like management sims. I like the idea of building something from the ground up, and having it affect an entire city or civilization and getting people to love me as their overlord and savior. A-Train: All Aboard! Tourism seems to fit that criteria, at least on paper, but as I started to sink more time into it, it wasn’t long before I realized that this wasn’t quite the handheld management sim game experience I was looking for.

Released for the Switch a couple weeks back, A-Train: All Aboard! Tourism tasks the player with managing a railroad company. Your job is to build a solid public transportation infrastructure in Japan and meet certain goals like growing a city’s population to a specific threshold, or bringing in a certain amount of tourists before the time limit is up.

You connect various locations in a city to each other by building tracks and placing trains, and before you know it, you’ve created the railway system of your dreams.

As someone who lives in Singapore and has visited Japan several times –both being countries known for extremely efficient public train systems to get around the city quickly– building up my own train system in A-Train brought me a surprising amount of joy.

A-Train drives home the idea that having an effective public transportation system is the main thing that will attract tourists to your city, and it’s a key factor that comes into consideration when people start thinking about actually moving to your metropolis.

And, well, as someone who has enjoyed the perks of a well-connected and properly scheduled train system for years, I can safely say that, yes, this is something that I can no longer live without, and also something that people quickly take for granted once they get used to it.

It’s incredibly satisfying to build a sprawling railway system that keeps your citizens happy, and when your people are happy, you attract more tourists, your money goes up, and you get that free shot of dopamine in that familiar video gamey way. Look, I like big numbers in video games. They just make me feel like a better person.

A-Train: All Aboard! Tourism is surprisingly deep as well; the first couple of scenarios are played through on Easy difficulty, but the game steps things up later when you start having to think about other factors like the stock market, taxes, bank loans, employee satisfaction… the list goes on.

The game certainly doesn’t waste any time in throwing tutorials at you either, which can quickly overwhelm new players, just as it did for me. But complex and in-depth mechanics and systems won’t ruin the game for me, it’s the poorly implemented user interface that made me realize that A-Train wasn’t a game I’d end up sinking tens of hours into after all.

First, the controls are infuriating in the simplest ways. You can’t navigate menus with the d-pad. While the d-pad is primarily used to access certain options when you’re examining the city (such as a speed up meter), opening up a main menu and scrolling through its options still requires you to use the left stick, and not the d-pad.

Next, the tutorials are repetitive and some even feel unnecessary. I was bombarded with the same controls tutorial twice in the starting scenario, and given a 15-second rundown of how to save and load my game. It certainly didn’t help that the game’s performance on Switch isn’t exactly stellar either; opening menus takes a beat longer than it feels like it should, and loading up anything in the game takes quite a while.

And finally, the UI is so irritatingly busy and cluttered that it’s hard to keep track of everything that’s going on. There are icons, sub-menus, and numbers all over the sides of the screen, and it’s distracting and just not very nice to look at.

Interestingly enough, some value indicators in the game don’t even make that much sense. For instance, if you had like 2 billion yen and change, your funds would be reflected in-game as 2B300M450KJPY, or something like that. At first glance, it just looks like a random string of numbers and letters, but it’s actually telling you that you have 2 billion, 300 million and 450,000 Japanese yen.

It’s an infuriating and bizarre way to tell you how much money you have in this game, and definitely soured my overall experience with A-Train. Put all of these little issues together, and you’ve got a decent management sim game with very confusing and overwhelming UI elements that can be extremely off-putting.

I wanna say that I did enjoy my time with A-Train: All Aboard! Tourism. I love the positive philosophy behind building a strong railway system in particular, but I’d be lying if I said this was an easy recommendation even for fans of management sims.

At the end of the day, the UI is a really important element to consider, especially in complex sim games, and unfortunately, A-Train just couldn’t stick the landing.